This 10 day self drive safari uses comfortable, well-positioned accommodation allowing you to enjoy your vacation in Namibia to the maximum. Roads vary from tarred to gravel, the condition depending on the time of year. So allow more time each day if you are travelling in the wetter summer months, especially off road. There are 2 species of rhino in Namibia, the black (Diceros bicornis) and the white (Ceratotherium simum). They are almost the same bluish-grey colour and also known as hook-lipped for the black and square-lipped or wide for the white.

Your first destination is to Waterberg Plateau Park, a 50km long, 200m high, extensive ridge. This characteristic brick-red sandstone formation can be seen as far away as outside Okahandja. Apart from some interesting hiking trails of varying lengths, the park is home to around 25 game and over 200 bird species.

The real wildlife action is at Etosha National Park though. Several of the 114 mammal species found in the park are endangered including cheetah and black-faced impala. Huge conservation efforts are on-going at Etosha and the park proudly boasts one of the largest growing populations of black rhino in the world, also an endangered species.

The broad, open spaces of Damaraland offers self-drivers more options to explore the beautiful and rugged countryside that other destinations on this tour cannot match. This region can still be termed as an 'unofficial' wildlife area with opportunities to observe desert-adapted elephant, giraffe, zebra and black rhino. There are many natural attractions as well, including Namibia's highest mountain, the Brandberg massif, Spitzkoppe and the rock engravings at Twyfelfontein.

Inland Damaraland changes to coastal with the drive to Cape Cross Seal Reserve and it's legendary Cape fur seal colony. The surrounding area consists of 60km² of gravel plains as well as the actual rock outcrop where the seals gather. Literally hundreds and thousands of them appear in the November to December breeding season.

The drive south heads to what many Namibians consider as the country's adventure playground. Somehow, the city of Swakopmund seems to have remained in the early part of the last century. The grand German architecture, immaculately restored or maintained, is still here. But gradually over the years, action and excitement have moved in. Swakopmund is now the adrenalin capital of Namibia, with endless day trips and activities to be found on sand, sea or the air.

The drive from the sea into the desert is somewhat taxing, although not over difficult. You will be well rewarded though for no part of the Namib Desert is more memorable than Sossusvlei. One of it's gigantic star-shaped dunes was measured from the base to be 325m high. Another pan worth the walk is Dead Pan. This normally dried white clay is scattered with the skeletons of ancient camel-thorn trees, aged as being between 500 and 600 years old. From the dunes you take a scenic drive back to Windhoek.

Although it is possible to book this itinerary 'as is', as with all our self drive trips this is entirely customisable. We can add or delete days, change the accommodation used and generally design the tour to suit your individual requirements. Visitors who might prefer a break from driving themselves can arrange a guided safari.

Head due north out of Windhoek on decent tarred roads through the garden town of Okahandja all the way to and past Otjiwarongo. Overnight not far from Waterberg Plateau - a colourful brick-red sandstone mountain. 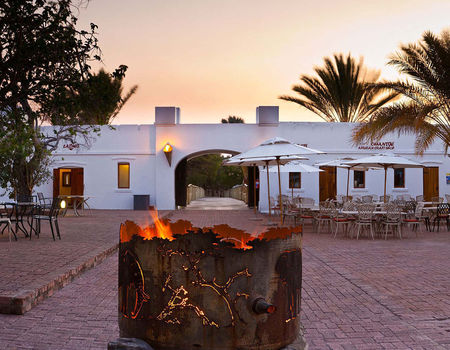 After breakfast depart the Waterberg area and head north to Otavi and Tsumeb to arrive at Etosha National Park via the Von Lindequist Gate, the eastern entrance to the park. A short drive follows to Namutoni, your overnight accommodation. Once you are settled in self-drive to some of the nearby waterholes. Consider ending your afternoon game drive at Klein Namutoni, the sun will be behind you which is excellent for wildlife photography. The waterhole at the fort is good for ... birding. Ensure you are inside the park well-before sunset and not to exceed the 60km/hr speed limit to the gates before sunset - and speeding, the park speed limit is 60km/hr, is strictly not allowed within the park. 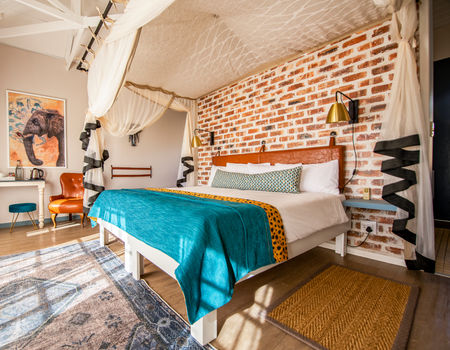 With a long day of game driving ahead of you it is best to pack up early and get into the swing of things as soon as the gates open at sunrise. The gravel roads are usually in a decent condition, an advantage as you head from waterhole to waterhole in search of mammals all the way west to Okaukuejo. Your lunch stop will depend on your wildlife sightings and on the time you decide to wait for the animals ... to come to you. Any main camp will suffice but Halali is favourite as it is half-way. Two nights at Etosha Safari Camp allow you to explore the national park with our guides who are familiar with the waterholes and the animals that visit them. Let them introduce you to African wildlife from the elevated seat of a game vehicle. Early mornings or late afternoons provide the best game viewing times. And, after Etosha enchantment return to the lodge to dive into the cool waters of the pools. Dine on the veranda under a dome of stars, sit next to a blazing fire or watch the ruby sun sink gracefully into the landscape. During the day you check the sightings book in the main office before you leave for a safari. Plan your drives accordingly. Nebrownii often offers regular sightings of lion, hyena, rhino and elephants. Lions are seen regularly at Okondeka.

Leave Etosha via the Andersson's Gate with one final game drive on the way out. Head south to Outjo and west towards Khorixas. The focus shifts from wildlife to geographical features, becoming more striking as you head into the Damarland section of the Namib Desert. Before Khorixas you might be interested in taking the short detour to Vingerklip (Rock Finger). From Khorixas continue westwards until you reach the Petrified Forest. You will need to pay for the services of a ... local guide to show you the remains of million year old petrified tree trunks. Namibia's living fossil plant Welwitshia mirabilis grows amongst these fossilised remains. Afterwards it's on to the main attraction Twyfelfontein, a world heritage site boasting over 2,000 rock engravings. Hiring a local guide to show you the most noteworthy attractions and retelling the stories within stories etched into the rock is worthwhile. Your accommodation tonight is at a lodge close to Khorixas.

A short drive followed by a slightly longer walk will bring you to the 'White Lady' rock painting. For many years it was speculated that this Bushman painting was a depiction of a European woman (it seems to have escaped those doing the speculating that the drawing was done thousands of years before Europeans visited the southern part of Africa, and even more worryingly close inspection of the drawing seems to indicate it is not female!) From Brandberg you begin driving ... towards the Skeleton Coast. The 130 kilometers route to Henties Bay is often very corrugated. Turn northwards along the Skeleton Coast to the seal colony at Cape Cross. The reserve consists of flat gravel plains and a rocky outcrop where the seals gather. Close by is a small lichen reserve. Afterwards drive back through Henties Bay and then a further 70 kilometers to Swakopmund. Once settled into your accommodation venture out for a browse around the town for an evening's entertainment on the coast.

Swakopmund is popular with visitors as it exudes old-world charm side-by-side a range of adventure activities. Optional action extends from sand-boarding to quad-biking and even scenic flights. These can be pre-arranged when you book this itinerary or left for you to arrange on arrival in Swakopmund. In place of an adrenalin rush an excellent preference would be to head out into the desert on the Welwitschia Drive. You will have to pick-up a permit from the Ministry of Environment & ... Tourism offices in Swakopmund before you go. Or you might like to spend the day admiring the quaint architecture, walk along the beach, find a suitable cafe or bistro or generally relax in the pleasant Swakopmund atmosphere. 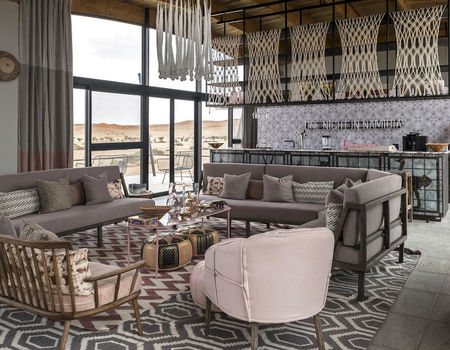 Leave Swakopmund and drive south towards Namibia's main harbour port Walvis Bay. If you decide to take a catamaran cruise around the lagoon (not included in package price) you will be joined by dolphins and Cape fur seals swimming alongside the boat. There is plenty of other marine and birdlife to admire on your trip. If you do take this trip remember you still have a drive of around 300 kilometers to come which will take some 4-5 hours. Your route ... will take you across the gravel plains of the Namib Desert and through the Kuiseb and Gaub passes. There is a great deal of beautiful scenery and breathtaking views along the way and remember to reduce speed significantly for curves or turns and heed all warning signs. Aim to arrive at your accommodation in the late afternoon. Set your alarm clocks for an early start.

This is a day for early birds as you need to be at the park's gates about an hour before sunrise. The drive down to Dune 45 is about 45 kilometers from Sesriem and is so-called because of the numbering system devised by conservation staff some years ago. It is arguably the most photographed dune in the area and many visitors stop and climb this dune. You might like to continue onwards towards Sossusvlei. Either stop at the 2x4 car ... park and walk along the dry river bed into Sossusvlei or take a shuttle. You can carry on in your own 4x4 vehicle, drive slowly and appreciate the scenery. Others prefer to enjoy a more leisurely drive down without stopping at Dune 45 as the dunes en-route come to life in the early morning displaying a variety of colours, shapes and sizes. After your morning activity head to Sesriem Canyon, a narrow 1 kilometer long gorge you can walk down into and along.

If you are looking to completely blow your budget you could consider joining a balloon flight over Sossusvlei this morning. Otherwise after breakfast, pack up and head back to Windhoek. If you are not flying out today we can book you suitable accommodation in Windhoek for tonight.

All your meals and activities as specified.
A welcome pack including maps and vouchers for the places that you'll be visiting.
See the individual lodges for precise inclusions & exclusions
A 24 hour emergency assistance phone number

Vehicle & Fuel
Park entrance fees (these need to be paid on arrival).
Tips and gratuities (which are optional).
Any meals or activities not specified.
See the individual lodges for detailed inclusions & exclusions.

Although we have excluded the cost of renting a vehicle from the quoted rate we are happy to advise you on the best possible vehicle and arrange a rental for you. For an idea of what is available have a look at our car hire in Namibia section 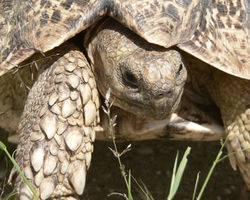 Etosha, Swakopmund & the dunes at Sossusvlei are the highlights of this trip. 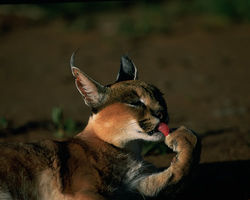 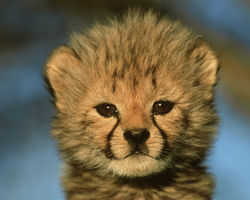 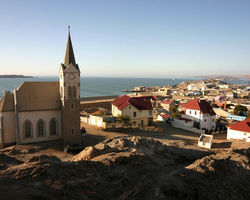 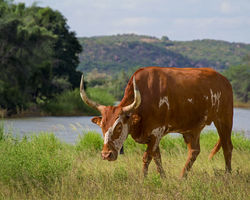 As you would expect from our longest self drive safari, it visits most of Namibia including Owamboland & Kaokoland - two areas which seldom appear on trips through the country.