Kolmanskop is Namibia's most famous ghost town, and is situated in the Sperrgebiet, (forbidden territory) a few kilometers inland from the port of Luderitz. In 1908, the railway worker Zacharias Lewala found a sparkling stone amongst the sand he was shoveling away from the railway line, near Kolmanskop. His supervisor August Stauch, was convinced it was a diamond and when this was confirmed, the news spread like wildfire, sparking a huge, frantic diamond rush and causing fortune hunters to converge in droves on Kolmanskop.

The town soon developed, becoming a bustling little centre and providing shelter for workers from the harsh environment of the Namib Desert. Large, elegant houses were built and it soon resembled a German town, complete with an impressive array of amenities including; a hospital, ballroom, power station, school, 4-lane skittle alley, theatre and sports hall, casino, ice factory and the first x-ray station in the southern hemisphere. Fresh meat could be purchased at the butcher's, there was a bakery, furniture factory, a public playground and even a swimming pool! At the time, there was also a railway line to Luderitz.

The development of Kolmanskop reached its pinnacle in the 1920's, but the town declined after World War 1, when diamond prices crashed. At this time approximately 300 German adults, 40 children and 800 Owambo contract workers lived in the town. In spite of, or probably because of, the isolation and bleakness of the surrounding desert, Kolmanskop developed into a lively little haven of German culture, offering entertainment and recreation to suit the requirements of the affluent colonialists.

Unfortunately for Kolmanskop and it's inhabitants, richer diamond deposits were discovered further south, and operations were moved to Oranjemund. Within a span of 40 years Kolmanskop lived, flourished and died. Today the ghost town's crumbling ruins bear little resemblance to its former glory. The stately homes have been nearly demolished by the wind, and are gradually becoming enveloped by encroaching sand dunes. In 1980, the mining company De Beers, restored a number of buildings, and established and interesting museum, which has now become a tourist attraction.

Film buffs might be interested to know, that in 2000, the film, The King Is Alive, was filmed in Kolmanskop, with the town being utilized as the film's main setting. The town was also used as one of the locations in the 1993 film, Dust Devil.

After obtaining your permit you can drive out to Kolmanskop and join a guided tour, which not only provides the history of the former mining town, but about the diamond industry today as well. After a short introduction and visit to the more important buildings, visitors are allowed to explore Kolmanskop on your own. Timings are:

Most of guided safaris which visit Luderitz include an excursion to Kolmanskop, if you are self driving in Namibia and spend any time in Luderitz a visit to Kolmanskop should be on your itinerary.

This tour can not be pre-booked but can be arranged on your arrival in Luderitz. 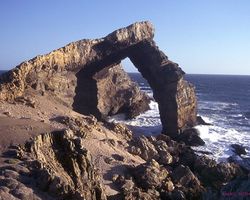 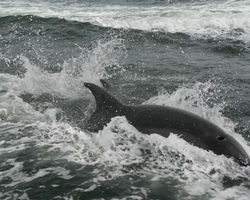 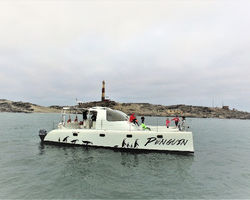 Join us for an unforgettable trip on the catamaran \

If you want to explore the flora and fauna of the Succulent Karoo desert on your own you have five different hiking trails to choose from.

These drives in the late afternoon present an opportunity to experience the incredible scenic beauty of Gondwana Sperrgebiet Rand Park at dusk.

Discover the delights of the desert: guided tours through the impressive scenery of the Succulent Karoo desert.

Day trip to Lüderitz and Kolmanskop

The Wild Horses of the Namib have roamed this harsh habitat since 1915 and are an experience one should not miss.

There is a choice of different routes on well-marked trails, varying from 18 km to 65 km

A short hike takes you to a lookout point with a unique view into the vast landscape and at a Land Art work of art.