This excursion can also be done in combination with a morning dolphin and seal cruise with our sister company Catamaran Charters.

The Moonvalley Welwitschia Drive gives you a ride to the breathtaking desert plains in the Namib Naukluft Park. Check-in is at 08h15 for the morning drive or 12h30 for the afternoon drive at our offices at the Walvis Bay Waterfront. With prior arrangement, we can also commence the excursion in Swakopmund, in which case we will collect guests from their accommodation establishment. After a short break at the Walvis Bay Lagoon to see masses of flamingos, the drive initially takes us inland past Dune 7 via the D1984 behind the dunes to the entrance of the Namib-Naukluft Park.

At first glance it would seem that the Namib Desert is a dry and barren region, but the ground and stones are covered in a great variety of lichens. They depend on their survival on the fog that moves in from the sea over the desert at night. We explore various kinds of drought resistant shrubs, of which two are dominant: The Dollar bush – so called because of its coin-like round leaves, and the Ink bush with its fine leaves and spindly appearance. Namaqua Chameleon and Shovel-snouted Lizards can often be spotted hiding amongst the leaves, while we may also look for other desert creatures, such as the hairy thick-tailed black scorpion and the Peringuey’s adder for example. We again stop at the moonvalley lookout point, from where one has a splendid view of the Swakop Valley landscape. In the foreground are furrows caused by erosion. The moonscape came into existence as the Swakop river cut through the softer surface deposits. These soft materials were laid down some 460 million years ago when the area’s climate was wetter.

We subsequently pass Goanikontes and head through the Swakop river. Compared with the desert plains, the Swakop river valley has lush vegetation. The camel thorn, anaboom and tamarisk all grow here.

We will stop in the shade under one of the camelthorn trees for a short picknick.

From here, we continue up a side valley through a Dolerite Dyke. A black ridge of dolerite snakes across the hills. This is an example of igneous rocks, where molten lava penetrated into a crack in the older grey granite rock and now forms the backbone of the ridge.

A little further on we stop to view the Welwitschia Mirabilis, which, being Namibia’s national plant, is unique to the Namib. It is, in fact, a coniferous dwarf tree that is related to the pine tree. It appears as though the Welwitchia has many intertwined leaves, but in reality there are only two leaves which continue to grow throughout its life span. As time passes by, they are torn into thinner shreds.

We head back into the Swakop river valley and drive in the valley along the Swakop river westwards. After a stop at the Musical Rocks we arrive back at around 12h30 for the morning excursion, or 17h00 for the afternoon excursion, where we can deliver you at your place of accommodation in Swakopmund, or take you along back to Walvis Bay. 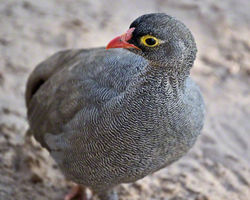 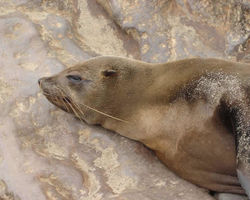 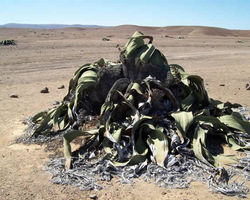 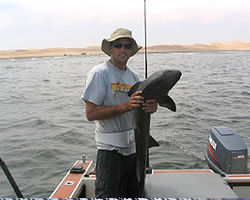 Spend the day fishing off the Namibian coast 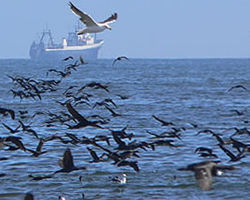 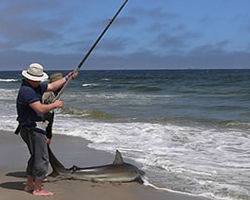 A day on the beaches of the Skeleton Coast

This half-day tour takes place along the eastern part of the major dune belt which lies between Walvis Bay and Swakopmund.

This tour takes you from the Dorob National Park into the northern reaches of the Naukluft Park past the Moon Valley, through the Swakop River Valley and the Welwitschia Plains east of Swakopmund.

We offer a night walk to the Namib’s gravel plains where you will be shown the desert-adapted nightlife concentrating on the various species of Gecko, Spiders, Gerbils and Scorpions. 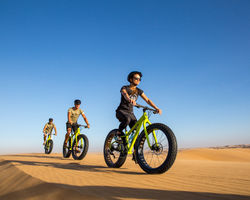 Join us on an unforgettable and unique ecological Namibian cycling experience. 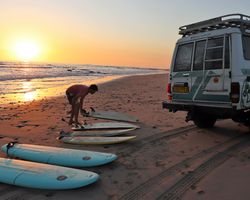