Discover a unique landscape of giant sand dunes that run straight into the ocean, explore the rolling dunes on a 4x4, uncover the creatures that live and thrive in this harsh environment and learn about how the Topnaar community have made this inhospitable terrain their home – all this and more on our full day 4x4 excursion to Sandwich Harbour and the Topnaar community.

Our tour starts every morning at 09h00 at the Sandwich Harbour 4x4 office at the Waterfront in Walvis Bay. After a short break at the Walvis Bay Lagoon to see masses of flamingos, the drive takes us to one of five RAMSAR sites (Ramsar site no. 742) in Namibia: A tidal lagoon consisting of adjacent intertidal areas, mudflats exposed at low tide, and sandbars serving as roosting sites. The site supports varying numbers of wetland birds (37,000 to 79,000 individuals); some species such as flamingos occur in impressive numbers. Eleven endangered bird species are regularly observed. Human activities consist of recreation and salt production. From here we proceed to the Kuiseb river delta, a dry riverbed where the odd springbok may be seen.

Here we especially look for some of the area’s smaller creatures, such as the fog-basking beetle, dancing spider (‘white lady of the Namib’), golden mole, shovel-snouted lizard and palmato gecko.

If weather and tides allow, we will drive along the beach right to the Sandwich Harbour Lagoon, one of Southern Africa’s richest and unique wetlands and the second RAMSAR site (Ramsar site no. 743) for the day. Sandwich Harbour boasts two distinct wetlands and associated mudflats. One is aquifer-fed and supports typical emergent vegetation, but is slowly disappearing due to natural causes. The second, under tidal influence, consists of mudflats and raised shingle bars. Wedged between the sea and the Namib Dunes, it is one of Namibia's most important coastal wetlands, supporting eight endangered species among the large numbers of wading birds. Several archaeological sites dating back 1,000 years exist within the site. Human activities have included fishing, guano collection, and hunting.

If our vehicles cannot drive all along the beach to get to Sandwich Harbour because of high tide, you will get a chance to see the lagoon area from one of our many beautiful lookout spots and will have the time to walk and explore. We have lots of time to stop along the way for photography. Our route from Sandwich Harbour takes us inland through an ocean of desert dunes to our Concession area south of the Kuiseb river. This concession was awarded to Sandwich Harbour 4x4 in 2019 and we are the only activity operator allowed access. On the way you will experience some exhilarating dune driving. Just before reaching the Kuiseb river, we serve a light lunch including a selection of oysters and savoury snacks, salad, bread, and fresh fruit with sparkling wine, beers and cooldrinks. We usually do this on top of a high dune overlooking the area. A folding table, chairs and a tablecloth come out, and we are ready to serve!

On crossing the Kuiseb river, we stop for a visit to the Topnaar people – often being referred to as Namibia’s “forgotten people”. The Topnaar community here (ǂAonin) is a clan of the Nama people in Namibia. Topnaars began settling in the area of Walvis Bay and along the Kuiseb River during the start of the 19th century. They first occupied the area at the mouth of the Swakop River, today the city of Swakopmund, and moved south beyond Walvis Bay to the Kuiseb mouth between 1820 and 1830. The Topnaars near the sea lived from hunting game – including seals, fish and sea birds. They kept some cattle and small livestock and ate mussels, ostrich eggs and eggs from seabirds. They traded their fresh produce like fresh water, meat, goat’s milk and Nara for goods from passing ships, among them tobacco and glass bead. The beads they turned into jewellery. A small faction moved upriver to Sandfontein but was attacked and driven away by British colonial troops. They receded to Rooibank (Scheppmannsdorf during Germany's colonial rule of South-West Africa).

Today, a community of about 350 live along the lower Kuiseb River and its delta in fourteen small settlements southeast of Walvis Bay, the most important being Utuseb. The survival and self-sufficiency of the Topnaar community historically also centred around a fascinating desert plant, the !Nara, which produces prickly melons with juicy flesh and valuable pips. Significant data exist that intimate a long history of use. Fossilised plant roots occurring in Tsondab Sandstone suggest that !Nara may have existed for as long as the Namib dunes.

As evidenced by special praise songs that extol its virtue, !Nara has a long association with and is central to the culture of the Topnaar people. While the Topnaars’ living habits changed in the last hundred years due to colonisation, the !Nara plant still remains important for them. We therefore do a short walk to experience a demonstration of how !Nara melons have traditionally been processed, during which we can also taste the flesh and pips. We also hear more details about the traditional way of life of the Topnaar people.

The route homewards will take us past Rooibank, where our last stop is Scheppmannskirche – the church in the desert. In 1845 the Rhenish missionary Heinrich Scheppmann founded a mission station, which was named Scheppmansdorf in his honour, and built the first church nearby. Measuring only 8 by 4 meters, this tiny building constructed from reed and wood was built in only four days and inaugurated on 28 June 1846. A small Church bell from Cape Town was fitted into a huge Ana tree close by. On 13 December 1846, the first Holy Communion was celebrated in the new mini-church. Attended by only seven people, it was nevertheless the beginning of the parish of Walvis Bay. In 1895 the old church had decayed so much that a new church had to be built. Today, the church has been renovated with bricks and cement and is used occasionally for weddings. After a drive through the desert flatlands we arrive back at the Walvis Bay Waterfront at around 16h30 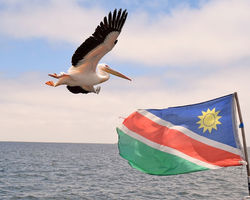 Geared for the sailing enthusiast, this adventure combines an overnight sailing excursion on a 40ft. single-hull sailing yacht on the Southern Atlantic with a 4x4 excursion through the dunes

Sandwich Harbour, part of the Namib Naukluft Park, is a place many have heard of but very few have ever visited. 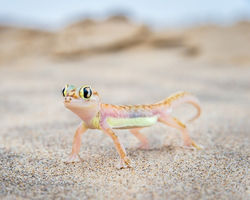 This excursion may also done in combination with the Sandwich Harbour Sailing Adventure offered by our sister company, Catamaran Charters.