This is a quad bike tour for those seeking more than just a quick thrill. Participants on this activity get to enjoy and learn about the fascinating desert environment around the Kuiseb Delta near Walvis Bay. The tour departs from Walvis Bay, generally early in the morning to avoid the thermal winds that pick up in the afternoon, and lasts about 4 hours. By using quad bikes you are able to traverse terrain that is otherwise difficult to access but great care is taken to make this as eco-friendly as possible. This arid landscape with its undulating sand dunes and ephemeral river is older than the Namib Desert and holds an array of interesting sights and facts, a very special journey of geological, archaeological, botanical and zoological aspects of this region.

With the experienced guidance of Fanie du Preez, you'll initially be given a pre-tour quad bike training session on lightweight, fully automatic bikes that make them suitable for riders with no previous experience and of most ages. It is then time to explore and discover the desert's hidden secrets.

Part of the tour looks at the formation of the delta, the historical changes that have taken place over thousands of years, the creation of Sandwich Harbour and Walvis Bay, as well as how dunes are formed and their different shapes and colours.

This harsh environment supports a variety of species of fauna and flora that have adapted to the arid climate. Present day animals that may be seen on the trip include brown hyena, jackal, elephant shrew, oryx, springbok, snakes such as the Sidewinder, chameleons and geckos and various beetles. Endemic birds include the Dune Lark and Damara Tern. However, the land holds evidence of much more diverse wildlife from a time when the terrain was not so extreme, including petrified footprints of elephant, rhino, buffalo, large antelope species and giraffe.

One of the final highlights of this trip is meeting with the Topnaar (one of the oldest Namibian inhabitants), a small community of people that are descendants from the Khoi-Khoin and that still live their traditional lives in the dunes, nearly entirely supported by the harvesting of the !Nara fruit.

This is definitely a highlight for any visitors to the Namibian coast and is highly recommended.

Our tour departs from the premises of Lagoon Chalets, 8th Road West, Meersig, Walvis Bay. When you enter town from Swakopmund, just carry on straight on the street with which you entered, until you reach the building of the Walvis Bay Information Bureau, there you turn right into 5th Road. Carry on until you reach the first set of traffic lights, where you turn left  and carry on until you see  8th Road West turn-off to the left and 500m on that road, you will reach the entrance to Lagoon Chalets on your left. 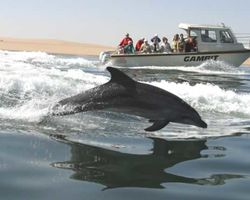 A dolphin cruise around the Walvis Bay Lagoon 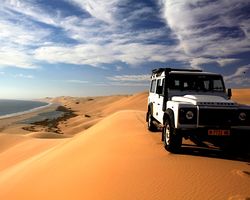 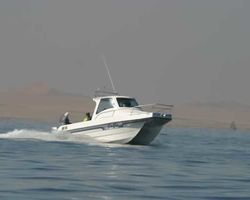 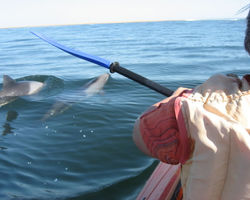 Kayaking on the Walvis Bay Lagoon

We offer a magical kayaking experience with Cape Fur Seals on the beautiful lagoon and in the surrounding water of Walvis Bay, Namibia

Out of the 16 near-endemic birds of Namibia the Dune Lark is the only true endemic. 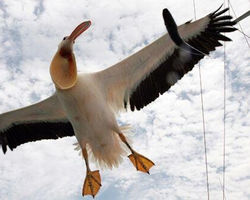 We hoist the sails of our four sailing catamarans whenever possible, switch off the engines and let our guests experience true sailing. 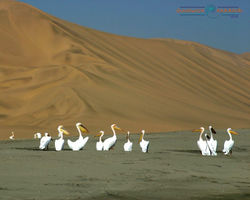 After a short break at the Walvis Bay Lagoon to see masses of flamingos, the drive initially takes us to the Kuiseb river delta, a dry riverbed where the odd springbok may still be seen. 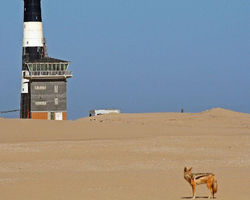 The Marine Dune Day gives you the ultimate combination of a leisure cruise on the Atlantic Ocean and a 4x4 ride in the breath-taking Sandwich Harbour Area of the Namib Naukluft Park. The day starts with a Marine Sailing Cruise with o 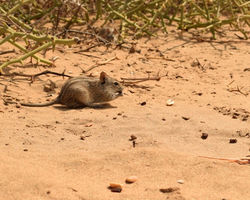 This afternoon tour will provide an insight into the way of life of “Namibia’s forgotten people” – the Topnaar. 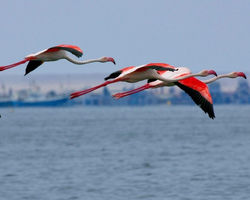 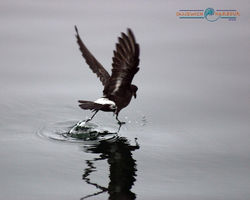 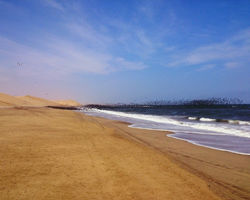