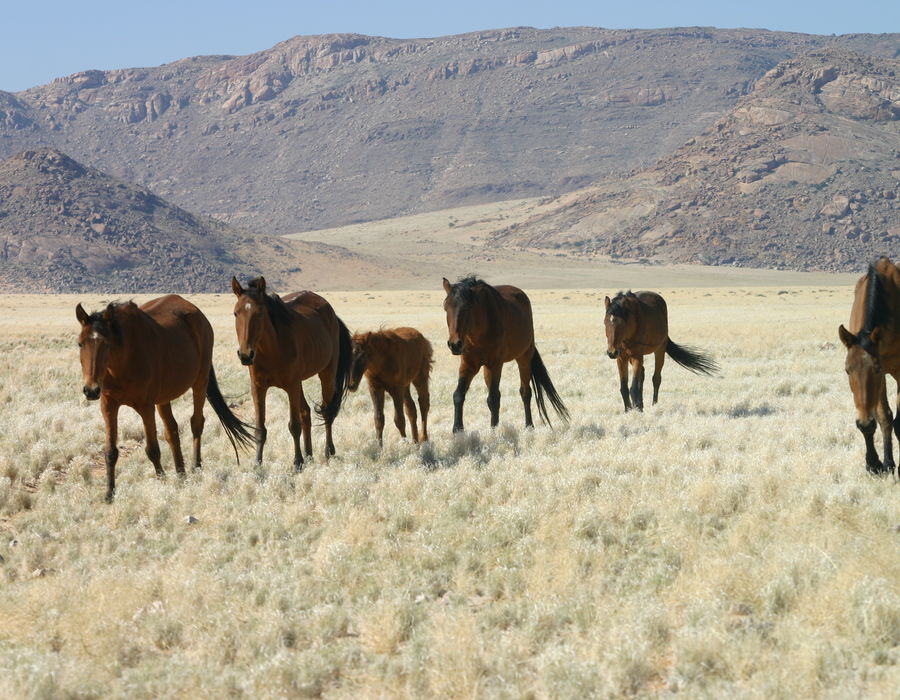 Where the desert blooms

The Succulent Karoo transforms into a sea of bright flowers after winter rains - which is why it is also called 'Namibia's Namaqualand'. In Gondwana Sperrgebiet Rand Park near Aus you experience the most bio-diverse desert on earth. It is a landscape of granite mountains, dry riverbeds and sweeping plains.

To the east the park (510 km²) borders on the Nama Karoo, and to the north on the dune sea of the Namib, where the Wild Horses roam the sparsely vegetated plains of the Namib Desert. They come to drink from the trough at Garub, some 20 km west of Aus. Over the decades they have conquered the desert as their habitat. Equally fascinating is the diamond ghost town of Kolmanskop, 90 km to the west, where the deserted houses have been taken over by sand; and the small, historically fascinating coastal town of Lüderitzbucht.

Private nature reserve on the fringe of the Diamond Restricted Area

Majestically they rise from the vast desert plains: the granite mountains of the Great Escarpment which separates the uplands of Namibia’s interior from the coastal lowlands. The austerely-romantic world of mountains and deserts is a paradise for nature lovers as well as for hiking and mountain bike enthusiasts; the slopes on the western edge offer grand views of the desert that transforms into a sea of blossom after soft winter rains. And above the very plain which is home to the Wild Horses of the Namib, the 'Dikke Willem' mountain towers mysteriously.

However, a truly remarkable characteristic of the 510 km² Sperrgebiet Rand Park is the fact that it affords the opportunity to experience ‘Namibia’s Namaqualand’. The largest part of the park, the west and south-west, falls under the desert system of the Succulent Karoo which is world-famous for its magnificent display of blossoms after rainfalls during the winter months of August and September. But the park also happens to be the area where the Succulent Karoo meets with another two desert systems: the Dune Namib in the north and the Nama Karoo in the east.

Small wonder that botanists speak of a ‘hotspot’: there are more than 400 known plant species in the area around Aus; many of them are endemic, which means they do not occur anywhere else but here. In many cases these plants have developed fascinating survival strategies, especially with regard to water resources. The precious liquid is stored - in bulbs, stems and leaves. This is also referred to as succulence. Hence the Succulent Karoo derives its name from the plants which dominate in this area: (leaf) succulents alone make up about 1,700 of the more than 6,000 plant species of this desert. They also include the 'Living Stones'. In order to protect themselves against sandstorms or getting eaten by animals they have lowered their leaves into the ground and disguised themselves to look like stones. Some of the typical game species in the park are Klipspringer, Springbok, Gemsbok, Ostrich and Jackal.

The Gondwana Sperrgebiet Rand Park is a private nature reserve with several accommodation establishments. Activity-wise there is plenty to do: guided excursions to the area of the Wild Horses, hiking trails and scenic drives through the park as well as guided 4x4 tours (self-drive or passenger). Several well-marked hiking and mountain bike routes invite you to enjoy the fascinating landscape up close. And the deserted diamond settlement of Kolmanskuppe and the harbour town of Lüderitz are definitely worth a visit.

A place where comfort and freedom meet. The Eagle’s Nest consists of various self-catering chalets nestled along the Aus mountain landscapes. Each en-suite unit offers private kitchen facilities and its own spectacular view. However, the Desert Kitchen, just a short drive or walk away at Desert Horse Inn, welcomes guests for a hearty meal. It also hosts a small shop for access to fresh meat, preserves and the like. Guests are also invited to enjoy the various activities on offer on the property, including visiting the Wild Horses, mountain biking or enjoying the various walking trails in the area.

This is the adventurer’s dream. Just as the wild horses roam free and travers the magnificent terrain, so too can visitors lose themselves in this spectacular landscape. Inspired by Western horse ranches, the Desert Horse Inn brings traditional and authentic into balance. This property offers free standing chalets with rustic finishes and no lack of comfort. With the main guest areas consisting of luxurious wood and leather, overlooking a horse-shoe-shaped pool. A short drive from the property, lies a view point where the iconic wild horse of southern Namibia can be visited. Beyond that, the Desert Horse Inn offers access to countless activities, including horse-back riding and mountain biking.

This authentic stone cabin offers a great self-catering experience for the adventurers at heart. Secluded in the Aus landscapes, this cabin offers privacy and its own thrilling history. An old car-wreck welcomes guests, shot up and rusted in a police chase that occurred in the 1940’s – guests should be sure to explore the histories during their stay. The cabin does have electricity, but guests should note, no additional outlets. The reception at Desert Horse Inn offers charging facilities. Guests are also welcomed to visit the main lodge to dine at the Desert Kitchen or partake in any of the activities on offer.

Desert Horse Camp sparkles with its own special magic. The campsite, a 1.5km drive from the reception area, is set in an amphitheatre of rock.

Geologically it is a highly interesting area as well - in fact it is highly valuable in the true sense of the word. The Aus Mountains are part of the Great Escarpment which was formed after the primeval continent of Gondwana disintegrated about 120 million years ago: the rim of southern Africa rose and was then eroded off the coast. In the process the escarpment shifted into the interior and coastal plains appeared. The Orange River washed diamonds from the area around Kimberley to the coast, where they were picked up by the Benguela Current and carried northward. As the sea level dropped,

the deposits were exposed and the wind blew some of the gems inland – where in 1908 man started to discover and systematically mine them. Two Restricted Areas, each about 100 km wide, were proclaimed along the coast in order to prevent illegal prospecting and to curb the smuggling of diamonds.

Man, by the way, left his traces in this area as early as 70,000 years ago. At the foot of the Hunsberge Mountains south-east of Aus layers of a total of seven ‘cultures’ were discovered in the 'Apollo 11' grotto. Furthermore, slabs of slate with 27,000-year-old paintings were found there in 1969. So far this is the oldest rock art in Africa.

The area was roamed by hunter-gatherers for ages. In the 17th century Nama groups started to move in and displaced the San (Bushmen); the ‘newcomers’ were later joined by Orlam groups (related to the Nama) who settled around Bethanien.

In 1883 Orlam Captain (leader) Joseph Fredericks sold the coastal strip between the Gariep mouth and Angra Pequeña to Adolf Lüderitz, a merchant in Bremen – this was the prelude to the German colony proclaimed in 1884. At first the route for ox wagon transports went through Kubub, south of Aus. But the railway line was built through Aus in 1906 because the incline was not as steep. During the First World War South African and German forces clashed at Aus. Numerous horses were lost in the turmoil of war; they became the core herd from which today’s Wild Horses are descended. South African Apartheid policies (starting in the sixties) left their mark in Aus, as did the rise (sixties, seventies) and fall (eighties) of Karakul breeding. After Namibia gained independence in 1990, tourism increased considerably.

Willem Swiegers senior bought farm Klein-Aus in 1983. During the nineties his sons Willem and Piet introduced the hospitality business, established Klein-Aus Vista and step by step extended the accommodation facilities, hiking trails and tours. In early 2004 the oldest of the brothers, Johann, joined the family business. When they became marketing partners of Gondwana Collection Namibia in the end of 2004, the name of the 510 km² area was changed into Gondwana Sperrgebiet Rand Park. 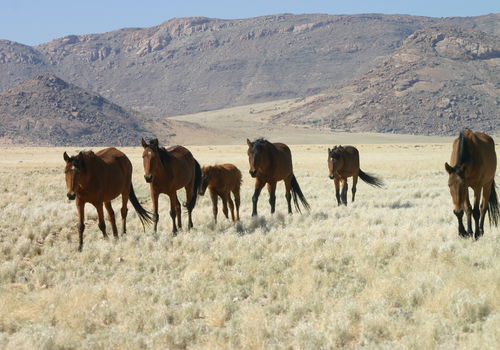 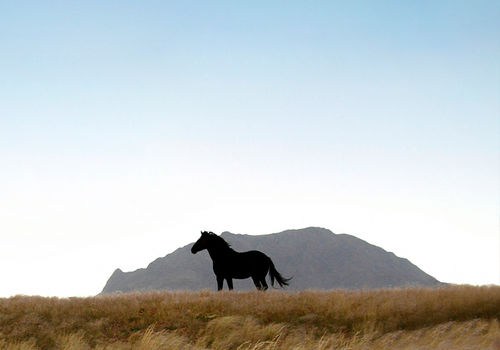