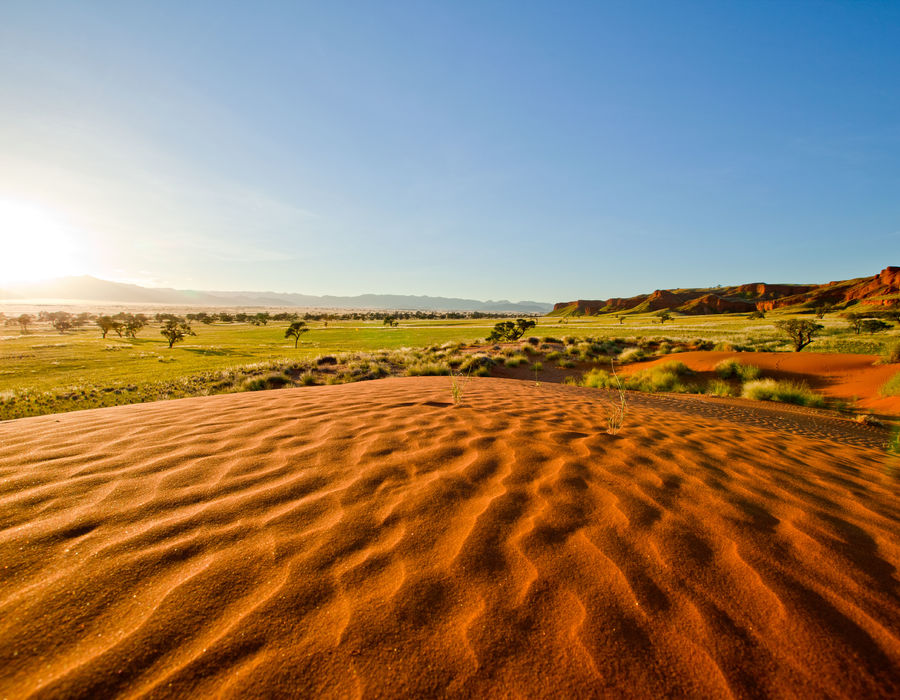 Do a 180 degree turn and the desert suddenly looks completely different: in the east vast plains stretch out to the foot of distant mountains, while in the west it is dune upon dune all the way to the horizon. In Gondwana Namib Park the Namib experience covers two sides. Even three, in fact, because under the reddish sand there is brown sandstone – the fossilised dunes of an ancient Namib, which in places come to the fore imposingly. The Gondwana Namib Park borders the spectacular World Heritage Site ‘Namib Sand Sea’, and only 60 km further south the Namib shows yet another face: the valley of the ephemeral Tsauchab River cuts through the surging sand-sea and ends in famous Sossusvlei. Every now and then, after very good rainfalls, Sossusvlei turns into a lake embraced by tall dunes.

The Namib extends along the coast from the Succulent Karoo (which starts around Lüderitz at the coast, but further south in the interior) right into Angola; it lies between the winter rain system in the south-west and the summer rain region in the north-east. The cold Benguela Current off the coast prevents the air from absorbing much moisture; since cool layers of air do not mix with warmer layers on top, clouds do not form either. Thus the Namib does not get any rain from the coastal side, but merely some moisture in the form of fog.

Two of the Namib’s three vegetation types are part of the 127 km² of Gondwana Namib Park: the sand-sea with a few grasses only, and the gravel plains with grasses and shrubs; along the seasonal riverbeds acacias can be found and in places also !Nara shrubs which bear fruit that resembles melons. Typical animals in this area are Gemsbok, Springbok, Ostrich and Jackal. Game moves freely between the park and neighbouring, state-owned Namib Naukluft Park as well as other privately owned guest farms.

Guests in the Gondwana Namib Park can choose from different accommodation options. The Namib Desert can be experienced on scenic drives or with an ebike on well-marked trails, and the sandstone dunes can be explored on a walk. Excursions to Sossusvlei and Sesriem Canyon are also included in the programme.

Have you ever seen the vast horizons of the Namib Desert from a point of pure solitude? A place where the whisper of the wind is the only sound that stirs the desert silence? The Desert Whisper is the ideal opportunity to embrace silence and solitude, to break away from the rush. Located on a small outcrop within the Gondwana Namib Park, this is an intimate experience where guests can enjoy solitude without compromising on luxury. Guests park their car at the base of the outcrop and are transported to the Desert Whisper by their Host. The kitchen is fully stocked with thought-through culinary delights, and access to a selection of wines, gins, whiskeys and rums to tickly any fancy. The afternoon can be spent lounging by the private plunge pool, with its own stocked pool-bar; are swinging in the floating chairs on the Desert Whisper’s terrace. A moment here offers serenity unparalleled, as the sun sinks into the western horizon.

Face the horizon head on, from the crest of a dune where the stars are so clear they seem just beyond reach. A place where imagination becomes tangible. The Namib Dune Star Camp. A short drive from Namib Desert Lodge, guests are chauffeured to the camp. Dinner is served on a beautiful wooden deck with the horizon stretches into forever and delicious aromas float through the evening air. Each of the freestanding cabins are positioned along the crest of a dune to offer undisturbed views. What takes this experience into a class of its own, is that the bed in each chalet is on wheels. This offers guests the opportunity to wheel their bed onto the cabin’s private terrace where incomparable night-sky views await. Fall asleep to the silent sound of shooting starts and the whisper of the desert air.

The Namib Desert is an immense chronicle of time, offering a direct link to the ancient past, yet very much a living entity. Housed at the foot of 20-million-year-old petrified dunes, Namib Desert Lodge is one of Gondwana’s flagship properties. This property is a true oasis in the desert, with lush gardens offering shade over the lodge. Two glorious pools coax guests to enjoy the warm desert afternoon lounging and sipping icy cocktails. But fret not, adventure is close, with Sossusvlei just a short drive from the lodge. Join a Sossusvlei Excursion or travel at your own pace. Evenings are celebrated with Dune Drives to appreciate the sunset and view from atop the petrified dunes. Namib Desert Lodge provides a clear and uncluttered insight into the region’s past and present.

Take on the great outdoors, without the hassle of setting up a campsite. This is our version of glamorous camping. Show up and relax in style with this new self-catering experience. Tents are fully equipped with kitchen and en suite bathroom, and there is no need to bring any sleeping bags. Spend your evening looking out into the Namib Desert landscape, with the crackling fire to keep you company. For guests who wish to enjoy the best of camping and lodging – full lodge facilities are also available at this camping experience. Enjoy the activities on offer in the oldest Desert in the world.

Those interested in geology will definitely get their money’s worth. The fossilised dunes go back to shifting sand dunes which existed in this very same spot already 20 million years ago. The sand solidified and became sandstone during more humid periods 16 to 8 million years ago. Therefore the Namib is rightfully regarded as the oldest desert on earth. Besides, the sandstone contains fossils, including up to 16-million-year-old egg shells from the ancestor of today’s ostrich. They are proof that the large bird evolved in Africa and not in Eurasia, which was considered a possibility for quite some time. The sand of the young Namib is the debris of erosion in the Drakensberg Mountains and other mountain ranges in South Africa. The debris was carried into the sea by the Gariep (Orange) River, deposited along the coast and piled up into dunes by the wind.

San (Bushmen) regularly wandered through the Namib, but never lived there for any notable length of time. Various groups of the Nama people arrived from the 18th century onwards, including the Topnaar who still live along the banks of the Kuiseb River. Orlam groups (related to the Nama) followed later on as they backed away from European settlers at the Cape. Ten years after the area was proclaimed the colony of German South West Africa, Witbooi-Orlam, led by Kaptein Hendrik Witbooi, clashed with German colonial forces in the nearby Naukluft Mountains. The ensuing peace treaty was observed until the uprising of the OvaHerero and Nama in 1904.

Power was taken over by South Africa in the early stages of the First World War. But only during the forties was the area on the edge of the Namib divided into farms. Livestock farming was tough, however, because rains are rare and unpredictable, and the availability of grazing changes accordingly. After Karakul farming collapsed during the eighties, the land was increasingly used for tourism.

Farm Dieprivier ('deep seasonal river'), run by the Voges – an Afrikaans family - since the forties, was known throughout Namibia as an area of particular scenic beauty. In the late eighties Pieter and Ella Voges built Namib Rest Camp, later renamed Petrified Dune Lodge, at the foot of the fossilised dunes. In December 2004 Gondwana Collection Namibia purchased the 12,700 ha (127 km²) area, ended livestock farming and transformed the farm into Gondwana Namib Park 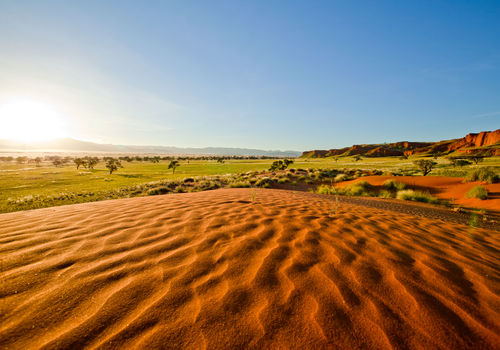 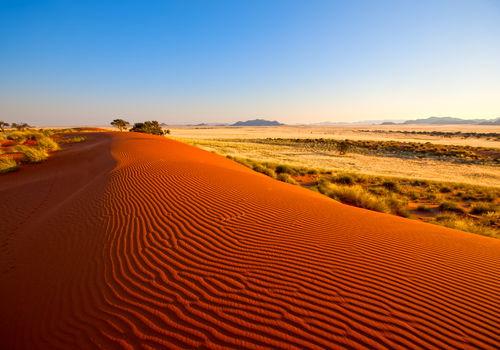 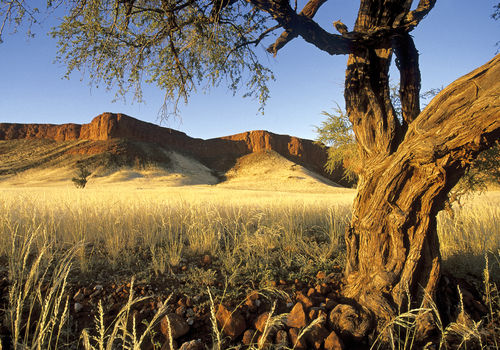