In the private nature reserve the Kalahari shows just how incredibly beautiful it is. Be it colonies of weaver birds, Ostrich, herds of Gemsbok and even giraffe: the Kalahari is alive!

The mean annual rainfall in this part of the Kalahari is between 200 and 250 mm, which is far more than the usual average for a desert (less than 100 mm). However, the water seeps into the sand in no time, and whatever accumulates in the clay or lime pans has soon evaporated again. Surface water is a rarity.

The 98 km² area of Gondwana Kalahari Park is home to animals which are typical for the Kalahari - like Springbok, Gemsbok, Jackal and Bat-eared Fox as well as Ostrich, Kori Bustard and many other types of birds. The park represents two vegetation types: the tree and shrub savannah of the southern Kalahari (grasses and acacias) and the Karas dwarf shrub land which is actually classed with the Nama Karoo. The fact that there are hardly any nature reserves in the southern Kalahari is another reason for the significance of the park.

Guests can choose between different accommodation options, ranging from lodging to convenient camping sites (with private toilet, shower and sink). There are several hiking and e-bike trails through the park, scenic drives are offered as well. 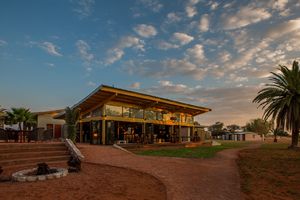 When visiting the Kalahari, we want guests to immerse themselves in the experience. Our aim is to offer the opportunity to feel closer to the multi-faceted richness of the Kalahari – much as its indigenous people once did. This lodge offers a new meaning to indoor-outdoor experiences. Here the architecture of the various guest areas provides direct access to the Kalahari Desert, even while sipping night caps at the indoor fireplace. Nature drives along the Kalahari dunes, as well as

As your toes sink deeper into the ochre velvet, you will fall even deeper in love with this ancient desert formed over 65 million years ago. Kalahari Anib Camping2Go ranks high on the list of those who yearn to feel closer to nature. Only a stone’s throw from Kalahari Anib Lodge, it still offers the luxuries of a lodge, while providing the absolute embrace of Mother Nature. Each tented unit is fully equipped for self-catering leisure. The en-suite bathroom, four plush beds and water-cooler ensure that comfort won’t be lacking. And the kitchenette with fridge, gas plate and all possible cooking wear make for an effortless outdoor experience.

Enjoy the panoramic views across the Kalahari dunes

Explore the Kalahari on electric fat-bikes

Explore the Kalahari on foot and on your own initiative.

Those with an interest in geology will get their money’s worth. The huge Kalahari basin with its great masses of sediments started to form after the ancient continent of Gondwana had broken apart about 120 million years ago. The longitudinal dunes, which are hundreds of kilometres long and up to 30 metres high, began to take shape only 16,000 to 20,000 years ago, however. In nearby Stampriet it can be seen, by the way, how rich in ground water the Kalahari is: in the seasonal Auob River’s valley it bubbles up in several artesian springs.

Where there is water, there is man, too. Hunters and gatherers roamed the area already thousands of years ago. Around the 16th century Nama of the 'Red Nation' came to settle there; Hoachanas was regarded as the main seat. Later on groups of Oorlam (related to the Nama) arrived from the south. Hendrik Witbooi, the Captain (leader) of the Witbooi Nama, sold tracts of land – including the area of today’s park – to settlers of European origin towards the end of the 19th century.

In 1937 a German prince, Friedrich Hermann zu Solms-Baruth, bought farm Dabib, which was almost 50,000 ha (500 km²) in size, and installed a manager for the time being. When, as an antagonist of Hitler, he lost all his possessions during the Second World War he came to live at Dabib with his family in 1948. He was buried at his favourite spot at 'Solmscher Posten'. His son Friedrich Wilhelm later sold parts of Dabib, including a piece of 10,000 ha (100 km²) called Anib, which continued to be used for sheep farming; in 1992 it also became a guest farm.

Gondwana Collection Namibia acquired farm Anib in December 2004 and transformed it into Gondwana Kalahari Park: sheep farming was ended, internal fences were dismantled and watering places suitable for game were set up so that the animals are once again able to move about freely. On scenic drives guests of the park get totally enthusiastic about the abundance of game – and they always wonder about the cross at 'Solmscher Posten'...