Museums In Northern Namibia –definitely Worth A Visit

Namibia is not only known for its vast open spaces, abundant wildlife, scenic tourism hotspots...but also the remarkable talent of its population to speak several local languages and easily switching between them. This comes from the rich diversity of cultures across the length and breadth of the country. To obtain a touch and feel about the country’shistory,a visit to itsmany museums is a rewarding experience.

Contrary to expectations, the often privately founded and funded museums do not only display colonial history, but also offer interesting traditional and cultural artifacts of different cultural groups.

A newer development is the establishment of ‘living museums’ in rural areas where individual cultural groups introduce tourists to their traditional lifestyle and skills, interacting with the visitors and often performing dances and songs. In this way, the various population groups preserve their own culturesand earn an income.

In this article we look at different museums in northern Namibia.

Museums in Grootfontein and Tsumeb

In Grootfontein a private museum was established in the former fortress of the colonial troops (Schutztruppe) by locals, before independence already. It not only displays various artifacts, but also historic farming implements and provides interesting details about the history of Grootfontein and surroundings. Being housed in the old fortress creates a special flair and the courtyard is a perfect setting for large objects.

Only 30km away from Grootfontein on the way to the Etosha National Park is Tsumeb, a mining town, dating back to German colonialdays. Tsumeb was famous for copperand for beautiful gemstones and crystals during its mining hey day. A museum in a private home takes visitors down memory lane with mining and mineral displays, artefacts from the Himba and Herero, and cultural group- and old military weapons. Visitors can also learn quite a bit about the mysterious Otjikoto Lake outside Tsumeb and results of several diving expeditions. The driving force behind the initiative to establish this museum was a remarkable woman, Ilse Schatz. She grew up in Tsumeb and authored several books on the history of her hometown, which is intertwined with nearly a century of mining.

From Tsumeb to the central north one can either turn off left towards the Etosha National Park or continue north on the tar road past the Oshivelo gate, a veterinary checkpoint towards Ondangwa in north central Namibia. Before reaching the southern outskirts of Ondangwa, one can visit the Nakambale museum {see our story}, consisting of the homeand church of the Lutheran missionary Matti Rautanen from Finland. Rautanen started the mission station in 1870. Just a few metres away lies a traditional homestead of the Ondonga people, who belong to the Owambo ethnic group. This homestead with its intricate yards and palisaded sections can be viewed. Local guides inform about the traditional living in that area.

Back on the main road to Ondangwa, there is a turn off to the Onandjokwe Hospital, which was established by the Finnish over a century ago. A wing of this historic building has recently been transformed into a small medical museum, displaying interesting medical equipment of yesteryear. The Onandjokwe Medical Museum is definitely worth a visit.

To complete the trip almost to the Angolan boarder, a 60km trip from Ondangwa to Oshikango provides views of typical rural village life with white sand, palm trees, traditional Owambo homesteads and livestock leisurely grazing in the fields. Look out for the signboard for Omhedi. In its vicinity is the King Mandume Museum in honour of the famous Oukwanyama Chief Mandume Ndemufayo, who died in 1917 while fighting against colonial forces.

A German-Namibian non-profit organisation, the Living Culture Foundation Namibia (LCFN) was established several years ago and focuses on cultural cooperation in rural areas in Namibia. The LCFN helps rural communities establish living museums. This new development is regarded as an authentic way of presenting traditional culture and creating a platform for intercultural exchange with tourists. Visitors of the living museums can learn a lot about the interesting cultures of Namibian culturalgroups and have a great opportunity to get to know the people of Namibia. These museums actively help preserve traditional cultures and the people obtain an income.

It can be found on the C44 road from Grootfontein to Tsumkwe, between Maroela boom and Mangetti Dune. Like the other living museums in Namibia it is an open-air museum of the Ju/’Hoansi bushmen (San) people.Here visitors can try to shoot an arrow and experience the special Ju/'Hoansi rope skipping.

There are more living museums in north-eastern Namibia in the Kavango East and the Zambezi Regions. Big road signs indicate the way, like the one at Singlambwe north of Kongola. It offers visitors an interesting insight into the life of the Mafwe people in a traditional village and its surrounding fields near the Kwando River.

To the west of Rundu towards Hakusembe is the living museum of the Mbunza people at Lake Samsitu.

Recently a similar museum was established of the Damara language group near Khorixas in the Kunene Region. Near the regional capital of Opuwo in Kunene, a living museum of the Himba introduces tourists to the lifestyle of the Ovahimba. From Opuwo one can travel to Ruacana on a good tar road. From there one can travel eastwards to Outapi in the Omusati Region. There is a small but interesting war museum, with military equipment on display from Namibia’s liberation war (1966-1989). While there, have a look at huge Baobab tree in the area, a famous landmark, which has its own history and local guides provide the information. 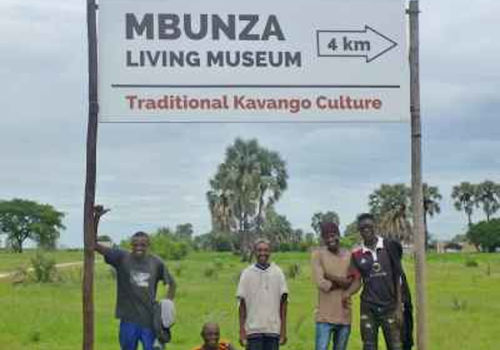