With 200 000 subscribers and over 1000 viewers from around the world at any one time, Gondwana’s webcam, positioned at the waterhole at Namib Desert Lodge, is outperforming many other webcams on the continent.

The YouTube channel ‘NamibiaCam’ is becoming increasingly popular, reaching people from far and wide and making a difference to many people’s lives. Stories are flowing in from the NamibiaCam community about the positive impact the wildlife camera is having on children overseas, terminally ill patients, autistic children and even an emergency rescue centre in San Francisco. It has inspired poetry, highlights nature and wildlife, and is motivating people to add a Namibian trip to their bucket list. 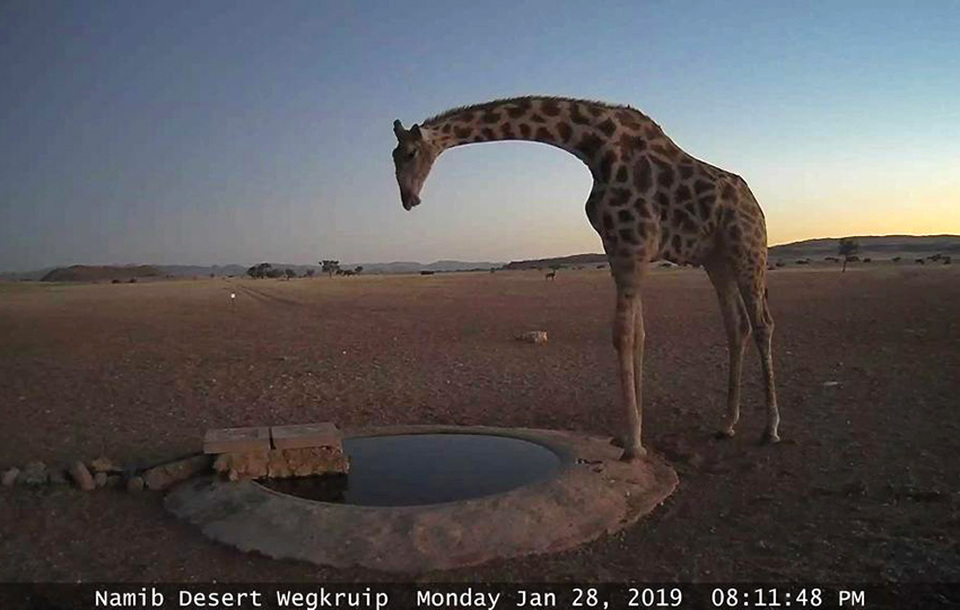 The success of NamibiaCam is thanks to the Gondwana Collection Namibia’s IT and marketing team, in particular IT expert, Jens Viëtor. It started off with an entirely different purpose in mind. Jens initially installed cameras at the Gondwana Collection lodges in 2010 to collect information for the weather site, NamibiaWeather. One of the most notable sites was Namib Desert Lodge with its spectacular backdrop of fossilised dunes. The small waterhole, several kilometres from the main lodge, proved to be an ideal site, visited by hundreds of oryx, springbok, zebra, wildebeest and, more recently, much to everyone’s delight, a leopard and a cheetah with cubs.

In 2016 Jens set up a link from the waterhole to the lodge to enable him to upload the snapshots that were taken at one-minute intervals, and he installed a television set in the reception area so that guests could view the waterhole antics. When the internet at the lodge was upgraded a few years later, he was able to upload live video footage and livestream to the NamibiaWeather website. Viewership quickly increased to 4000 per day and the webcam received praise on TripAdvisor. 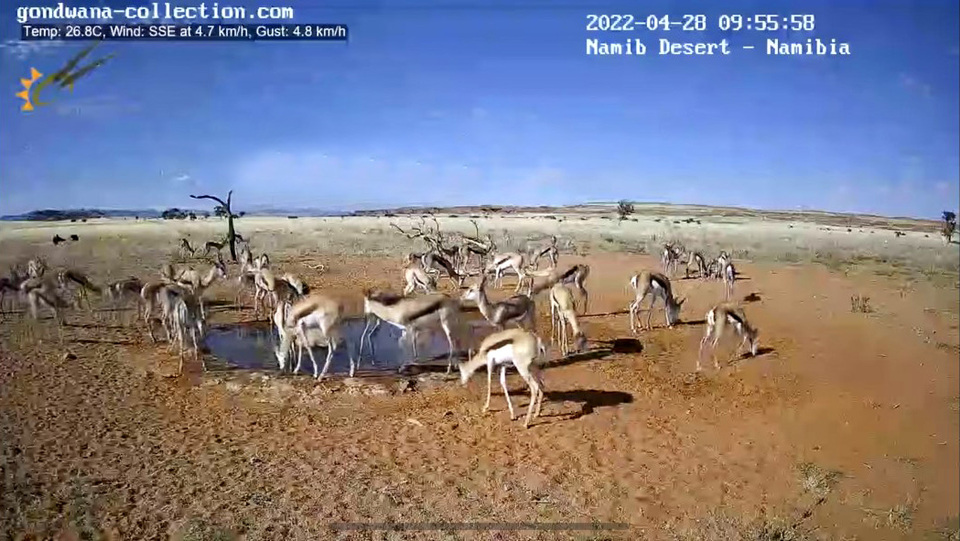 When in 2021 a viewer posted one of the webcam videos on YouTube, the Gondwana team was encouraged to do the same and registered the YouTube channel, NamibaCam, in May that year. They reached a milestone with the first hundred subscribers and by July had added a chat function. People from all over the world began to chat and a community was soon established. Jens added a microphone to the webcam and subscribers grew steadily, reaching a thousand by the end of October. 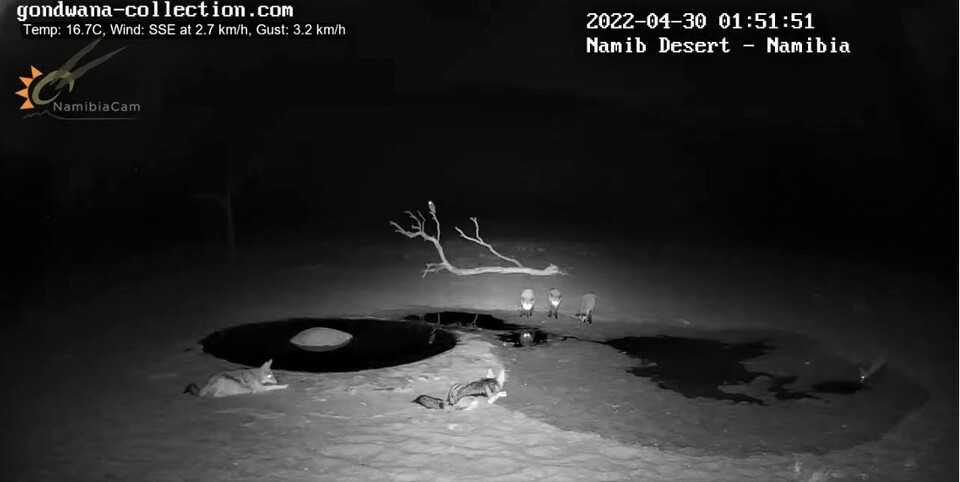 He then took it a step further with an innovative burst of Gondwana spirit and at the beginning of December decided to have a live Q&A online at the waterhole. He surprised viewers by appearing in front of the camera wearing an elephant mask and answered questions about the area and Namibia in general, playing the role of a true Namibia ambassador. People loved it. 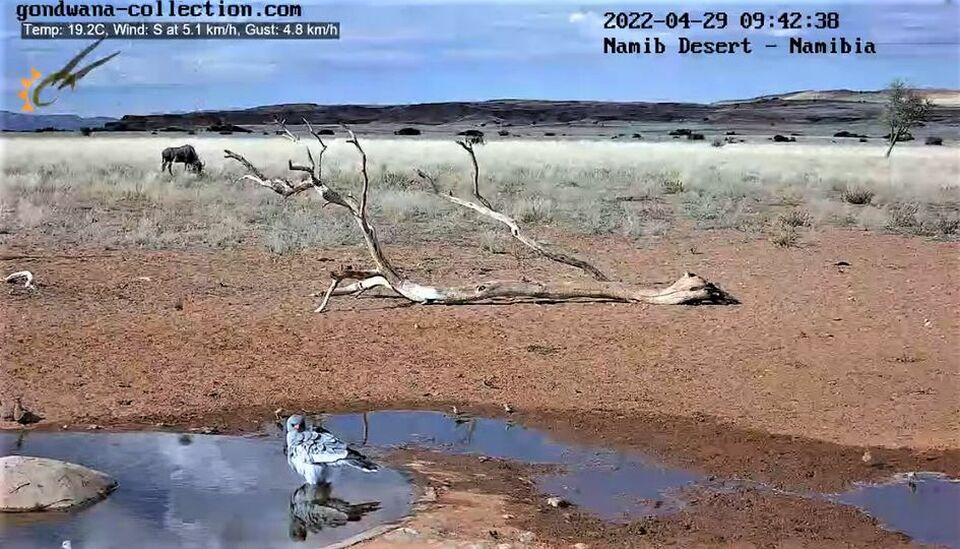 A Japanese viewer drew a cartoon of Jens in front of the waterhole, which went viral, and subscribers shot up to 100 000. The channel hit the top of the ratings in Germany where it stayed for four consecutive days. Jens then outdid the elephant mask on the 24th December and chatted to viewers from the waterhole wearing a Christmas hat and accompanied by a security guard in a Father Christmas outfit. It made a huge impact and the next day when a giraffe elegantly bent down to slake its thirst 8500 viewers were online watching him. By the end of April, subscribers had reached 200 000 and the YouTube channel had become one of the most highly subscribed wildlife channels in Africa. A video feature was added so that people could watch the footage they had missed live. 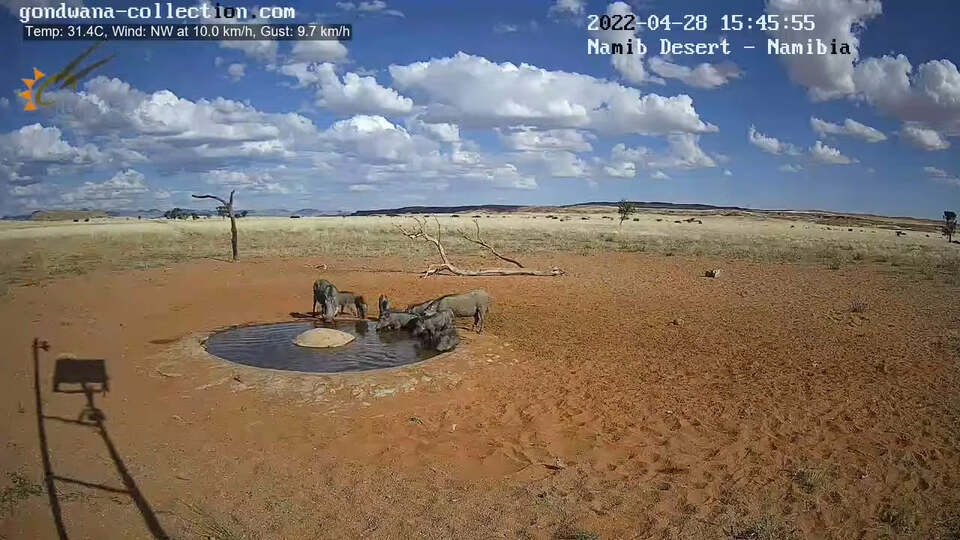 Jens continues to engage with the webcam community, putting a good word out there on the planet about caring for the environment, our wildlife, sustainability and eco-tourism and conveying the Gondwana Collection’s ethos of giving back to Nature what belongs to Nature.