Namibia's clear night skies away from the larger cities are internationally known among hobby astronomers and certain guest farms often have a telescope ready for them.

Lesser known is the fact that about 100 km west of Windhoek, at 1,800 m altitude, there are several huge reflecting telescopes near the majestic Gamsberg, looking for cosmic rays since 2002 for scientific purposes. Researchers study gamma rays from outer space caused by energy sources as far away as the Milky Way and galaxies many lightyears away. The dark matter and black holes are also part of the research programme of the world's largest reflector telescope system for gamma rays.

Around 260 scientists of 40 scientific institutes from 13 countries, including Namibia, are involved in the H.E.S.S. project at Farm Göllschau. Twenty years ago, the Max Planck Society in Germany and the Federal Ministry of Research jointly spent six million Euros on the project, contributing more than 75 percent of the total cost of 7.6 million Euros.

The abbreviation H.E.S.S. stands for "High Energy Stereoscopic System" and the acronym simultaneously honours the Austrian discoverer of gamma rays, Victor Franz Hess (1883-1964). Hess was an Austrian physicist who discovered the cosmic rays on 7 August 1912 and has proved their existence through his research. He received the Nobel Prize for Physics for this discovery in 1936.

The foundations for the first four telescopes were cast in the year 2000. A Namibian company built the gigantic steel structures weighing several tons. The first of the four telescopes erected at the vertices of a 120m long square was completed in mid-2002 and has since picked up gamma rays. By December 2003, the remaining three mirror (reflecting) telescopes were set up. They weigh 60 tons each, including the heavy cameras, which are placed in the centre of the parabolic mirrors. The mirrors of the telescopes are each composed of 382 round-mirror facets of 60 cm diameter. The total amount of 1,528 mirrors of the four telescopes altogether cover an area of 432 m².

The circular telescopes can be rotated on rollers and the huge mirror dishes are adjustable. In the first ten years alone, they discovered eight new sources of energy.

Meanwhile, hundreds of scientific reports and articles have been published on the H.E.S.S. Telescope’s collected data on gamma rays and their evaluation.

The immensely fast-moving gamma rays are 'made visible' by blue light to the cameras of the telescopes - with the help of the Cherenkov flashes. This is explained as follows: When very high-energy cosmic particles hit the earth's atmosphere, different elementary particles are formed by various processes depending on the type of particle, which can produce a light - more likely flashes of light – called the Cherenkov flashes. They only last a billionth of a second, but scientists can actually use them to determine the origin of the cosmic particles.

Exactly this effect is important for observation because, among other things, the gamma radiation of cosmic explosions does not penetrate the Earth's atmosphere and therefore cannot be directly picked up through telescopes on Earth. This is only possible with H.E.S.S. telescopes. These bluish flashes have been named after their discoverer, the Russian scientist Pavel Alexeyevich Cherenkov (1904-1990).

In 2012 for the tenth anniversary of the H.E.S.S. observatory in Namibia, a fifth telescope was added. It stands in the middle of the square, is almost 40 m high and towers over the four other telescopes. It has a diameter of 28 m. Its mirror has 875 hexagonal mirror facets of 90 cm in diameter. The total mirror surface is 614 m². The colossal total weight is 600 tons. The fifth H.E.S.S telescope is currently the world's largest reflecting telescope.

Prepared for the future

In 2015/16, the four smaller telescopes were modernised. The photo-multiplier cameras have been equipped with new electronics and a new ventilation and pneumatic system.

At the beginning of 2019 H.E.S.S. steering committee decided to let the mirror observatory continue for another three years. Similarly, the giant camera of the fifth telescope - now seven years old – is being replaced by a new, upgraded camera.

In 2015, Chile was selected by an international consortium to host a Cherenkov Telescope Array (CKA) for gamma-ray astronomy. By observing Cherenkov flashes in the Earth's atmosphere, conclusions can be drawn on astronomical gamma-ray sources such as galaxies. With the new cameras, all five Namibian H.E.S.S. telescopes are ready for the international Cherenkov project when its pilot phase is completed.

As early as 2017, Namibia's government has signed a memorandum of understanding to that effect. Australia is also involved. The 'Square Kilometre Array' (SKA for short) is a radio telescope under development with a total collection area of approximately one square kilometre. It will operate over a wide frequency range. Thousands of telescope dishes are being built in different countries with about a million antennas. In Namibia, smaller stations will be constructed in Maltahöhe, Karibib, Okahandja and Opuwo. Namibian scientists and their students are involved in the research.

Due to its size, the sensitivity of the new radio telescope is to be increased by 50 times compared to other radio telescopes. High-performance computers and long-distance networks with a capacity that exceeds today's global Internet traffic are needed to evaluate the data. The receiving stations in the different countries will be situated up to 3000 km away from a centre. This should allow extremely high-resolution images of the sky.

According to a scientific journal, the SKA should be able to investigate the gap in the history of the universe that begins 300,000 years after the Big Bang, when the universe became transparent to radiation and it extends to a billion years after the Big Bang. That was the time when the first young galaxies became visible. "The SKA Radio Astronomy Project is one of the largest projects of its kind in the world," says Dr. Michael Backes, physics lecturer at the University of Namibia. 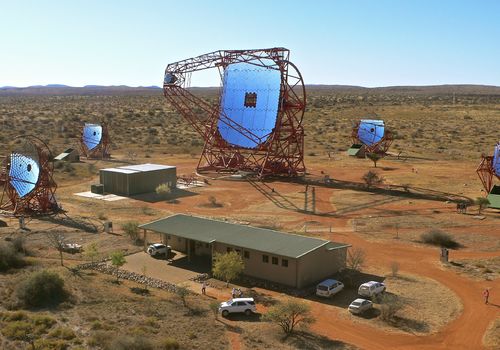 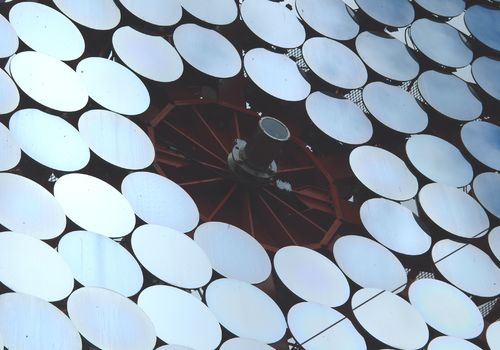 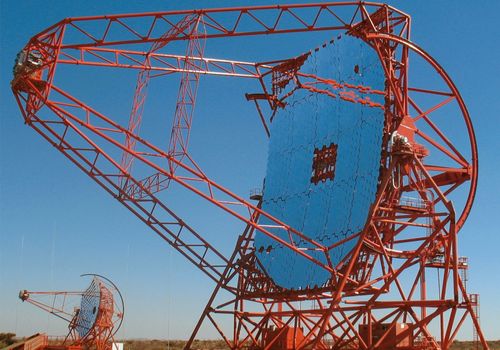