The clear night sky over Namibia is always fascinating for tourists and locals. One can also see some shooting stars.
Falling stars are celestial bodies from space that burn up when they often enter the earth's atmosphere and become visible. This brings us to thesubject - shooting stars are meteorites.

The larger and more compact meteorites are, the greater the chance that they will not burn up and hit the earth's surface like the Hoba meteorite near Grootfontein almost 80,000 years ago. A piece from heaven you can touch - between 190 and 400 million years old, discovered in 1920 and declared a national monument on 15 March 1955. The meteorite has become an international celebrity on Earth, since it is the largest known celestial body of this kind on our planet.

A shower of falling stars (pardon - meteorites) 'rained' down on the area around Gibeon in the south of Namibia around 30,000 years ago, experts estimate. Some of the gems can be seen in the middle of Windhoek's pedestrian zone.

Colossus made of nickel - the Hoba meteorite

The owner of the farm Hoba near Grootfontein was said to have discovered the large boulder in 1920 when ploughing, but according to his report in the Grootfontein museum, it was a little different, “On a winter day I hunted on the Hoba farm, I noticed a strange rock. I sat on it, only the surface was visible. I scratched the surface with my knife, it shone underneath,” he wrote.

Jacobus Hermanus Brits was able to cut a tiny piece with a chisel and brought it to the director of a company in Grootfontein, who rightly suspected that it could be a meteorite.

An article soon appeared in a newspaper in South Africa about the rock 2.70 m by 2.70 m dimension and weighing almost 60 tons. At that time, Namibia was still called South West Africa, and was a mandate area administered by Pretoria. The article aroused interest and experts from South Africa came to inspect the meteorite. It is just a few kilometers west of Grootfontein on the turnoff to district road D2860.

The scientists W.J. Luyten and L.J. Spencer successively published their studies of the Hoba meteorite in scientific journals in 1929 and 1932. The iron meteorite is said to have struck Earth some 80,000 years ago and is still in its original position. But there is no impact crater. Its age is estimated to be between 190 to 410 million years - unimaginable for us humans.

The metal colossus consists of around 82.4 percent iron, around 16.4 percent nickel and contains 0.76 percent cobalt. The rest consists of various trace elements such as chromium, gallium, germanium and iridium as well as tiny traces of carbon, copper, sulfur and even zinc. Meteorites with a nickel content of over 15 percent are called ataxides.

The site is touched up

Over the decades, the Hoba meteorite was measured again and again, people tried to dig it up, unfortunately vandals sawed off a piece, although it was declared a monument in 1955.

It was discussed how the location could be made more attractive and the vandalism contained. According to the Namibian historian Andreas Vogt, who also published his doctoral thesis on national monuments as a book, in 1987 the farm owner donated the monument council the area around the meteorite. The latter redesigned the site, financially supported by a mining company.

The soil around the meteorite was dug out and benches in the shape of a mini amphitheater. Toilets were built, an extended path to the meteorite laid out, a small kiosk and barbecue area were created. For a small fee, you can visit the Hoba meteorite.

It should be mentioned that the Hoba lost its status as a monument on 4 May 1979, but a few days before, on 30 April 1979, the entire area of 25 x 25 metres was declared a national monument with the meteorite as the focal point.

Compared to the impact of the Hoba meteorite almost 80,000 years ago, the "iron rain" in the area around Gibeon was not that long ago - 13,000 to 30,000 years ago. The fragments are spread over a large area, so it is suspected that the original meteorite body probably shattered or exploded, writes Andreas Vogt.

The British officer Captain James Edward Alexander discovered individual pieces as early as 1838. Alexander took some pieces to London to the famous astronomer Sir John Herschel, who confirmed their origin from space.

Various studies over the past 150 years have shown that these fragments are octahedrites. Their chemical composition consists of 91.8% iron, 7.7% nickel, 0.5% cobalt, 0.04% phosphorus and traces of gallium, germanium and iridium. Octahedrites are the most commonly found group of nickel-iron meteorites. The surface of the finds is smooth, but with many bulges.

The Nama-speaking population resident in the Gibeon area knew these hard metal pieces very well and made arrow heads, tools and even bullets from them, as the German-Namibia-based geologist, Paul Range wrote in a scientific article in 1940. Range had around 37 larger finds brought to Windhoek from the area between 1911 and 1913. Some of them were donated to scientific institutes worldwide. Even then, the export of meteorites was strictly forbidden with a fine of up to 600 marks. The 33 pieces found at Gibeon were exhibited in the Windhoek Zoo-Park after the First World War. On 15 February 1950, they received monument status. From 1975, the metal chunks were kept in the old fortress Alte Feste. Unfortunately, two of the pieces weighing up to 200 kilos were stolen there.
In the meantime, the rest of the ensemble of heavenly bodies have been resituated in the pedestrian zone of Windhoek to be marveled at - with metal rods on square silver-shimmering metal posts.

Two pillars are bare; these meteorites have also been stolen. In 2002, a mineral trader in Windhoek was arrested for sending a box of four pieces of meteorite to Johannesburg. He spent three weeks in custody before being released on bail. The proceedings dragged on until 2004 when the lawsuit was withdrawn for technical reasons, which led to the proceedings fizzling.

Caution - meteorites and finds are protected

Smaller finds of meteorites can be viewed in the museum of the Geological State Survey a few metres from the capital's Eros Airport. Removing meteorite fragments in Namibia from site, for example at Gibeon, is strictly prohibited and illegal. Exports are also prohibited. Internationally, collectors pay good prices for representatives from space. It is unfortunate that finds of meteorites from Namibia are available for sale on the Internet, also in Germany, even on EBay. 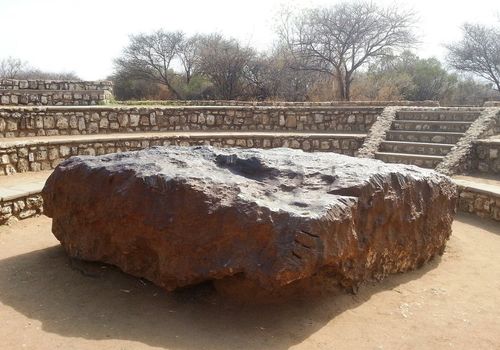 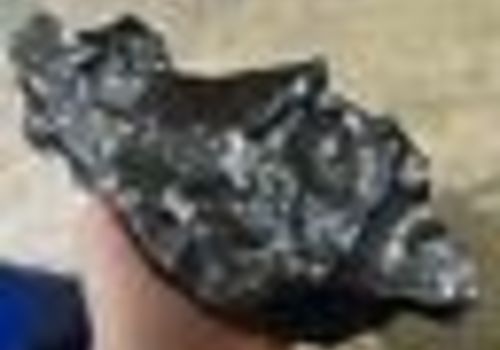