There are many moments in my lifetime when I have glowed with pride for my fellow Namibians. Recently I had another chance to be proud of my countrymen when they banded together to oppose the vandalism to the hundred-year-old building at the Garub railway siding.

Four young visitors to the country, now identified as French and Canadian citizens, spray-painted graffiti on the walls of the old Garub railway station, afterwards posting the photographs on their social media site. They were soon linked to graffiti in both South Africa and Namibia. The expected positive reaction was not forthcoming as Namibians were horrified to discover that foreign visitors could show such disrespect to the country they were visiting and that they had defaced the old railway station, which is part of Namibia’s heritage. The old building at Garub splattered with graffiti made its way on to the front page of both local and international newspapers as the story was reported and readers urged the embassies to make them accountable for their vandalism.

This put Garub in the spotlight. It got me thinking about the part it has played in Namibian history and its interesting story over the last hundred years.

Although Garub is now on the well-travelled tourist route in southern Namibia between Aus and Lüderitz, this wasn’t always the case. It only began to play a part in history when the railway from Lüderitz was built in 1906, and when underground water - a precious commodity in the desert extremes - was discovered there in 1908. Later it gained importance as home to Namibia’s population of wild horses.

At the turn of the twentieth century, the route from the coast inland was an arduous ox-wagon track through the Namib Desert known as the ‘Baai Weg’ (Bay Road). Animal bones littered the sand, testament to this waterless journey. Water in Lüderitzbucht (Lüderitz Bay), as it was known at the time, was either shipped from the Cape Colony or produced by the small desalination plant, which was inadequate for the town’s requirements. Lüderitzbucht became an important supply post for the Schutztruppe during the war against the Nama in the years between 1904 and 1907, and a railway line was deemed necessary. The line between Lüderitz and Aus was completed in 1906, reaching Kilometre 105 (later named Garub – meaning ‘leopard’ in Nama) on 13 September. (A record for railway construction was set in the area at the time with 2.5km of railway being laid per day!) At 767m above sea level, Kilometre 105 served as a functional stop to load the steam locomotive with wood/coal and water in preparation for the steep climb to Aus at 1495m. The railway line was later extended to Keetmanshoop.

It was only in February 1908 that good quality water was discovered at Kilometre 105 - a boon in the arid desert. A narrow-gauge line was constructed to transport the water by trolley the two kilometres from the borehole to the railway line. Garub became an important and reliable source of water in the area for both the inhabitants of the settlements and for the steam locomotives.

When diamonds were discovered on a railway siding outside of Lüderitz in 1908, people flocked to the south-western corner of the country. Diamond towns sprang up in the desert and Lüderitzbucht bustled with activity. Houses were built according to current German architectural style, women wore the latest European fashion and champagne was said to be cheaper than water, which remained a precious and scarce resource. In 1911, at the time of the diamond boom, when money flowed as freely as champagne, the Lubowski family from the Kubub farm in the vicinity began to sell refreshments at the Garub station. People travelling by train would stop for lunch and drinks at the restaurant. Diners could order their meals beforehand by telephone from a previous station or from Aus, so their hot meals could be waiting for them on arrival. The family even bottled their own water, which they advertised as ‘fresh Garub water’.

When World War One was declared in 1914 and the Union Defence Force (UDF) from South Africa landed in Lüderitzbucht in support of the Allied Forces, they found that the German soldiers had already evacuated the town and were travelling eastward, destroying the railway line after them. The Union troops followed in their wake, repairing the line. On 16 December 1914 advance troops reaching Garub clashed with a German rearguard, who was stationed in the hills as the rest of the troops retreated inland, resulting in one German and two UDF casualties. When the Union troops reached Garub on 22 February 1915 and found the railway station torched, the railway to the east dynamited and the water tanks demolished, they immediately set to repairing them. A photo reveals a team of thirty mules dragging drilling machinery across the desert. The Union troops stayed at Garub for several weeks constructing a narrow-gauge railway loop from the borehole to the station house, and 10 000 soldiers and 6000 military horses massed there during the period. I always find it mind-boggling to imagine such a scene at Garub, with army tents dotting the sand in their hundreds and horses sending clouds of dust into the air. General Botha even paid a visit to the base to boost morale as troops prepared for battle.

Just thirty kilometres further east, the German soldiers built fortifications in the Aus hills and prepared for a major confrontation. Every so often one of their planes would fly over the Union base at Garub, occasionally dropping bombs. With the exception of the odd skirmish, the expected confrontation between the troops at Aus never materialised. Hopelessly outnumbered and given the news that Union troops were also making their way from the east, the German soldiers moved north to Gibeon where a significant engagement took place. The peace accord would eventually be signed at Khorab on 9 July 1915, ending the southern-African involvement in the war.

Garub remained an important watering hole on the Lüderitz to Keetmanshoop line until steam locomotives were replaced by diesel in the 1960s. The borehole was maintained to supply the ganger and his team with water, and Consolidated Diamond Mines (CDM) cooperated with South African Railways to ensure that there was a continual supply of water for the wild horses. Sections of the Sperrgebiet (the restricted diamond-mining area), including the area where the horses reside, became part of the Namib Naukluft Park in the late 1980s. The Tsau //Khaeb (Sperrgebiet) National Park was established in 2004, protecting the adjoining swathe of Namib Desert.

An old borehole at Garub used by the farmers in times of emergency grazing was reopened a few kilometres to the east, and water troughs and a viewing hide were built so that the public would be able to watch the wild horses as they canter to the watering point to quench their thirst.

As for the old railway station, well it is still a picturesque and evocative reminder of another era, edged by a few stark tree trunks. Over the years, parts of the floor and roof were removed and the glass in the windows was broken. Visitors young and old stop at the old building and pose for photographs, and the wild horses can sometimes be seen catching patches of shade. It remains one of the landmarks from bygone days on this stretch of desert - with the Grasplatz railway siding, Kolmanskop and the early-1900 Lüderitz buildings - that characterise this fascinating part of the country, where water, diamonds and wild horses have featured over the years. And where travellers base themselves between the ever-popular Fish River Canyon and Sossusvlei to rest, enjoy, discover and explore. 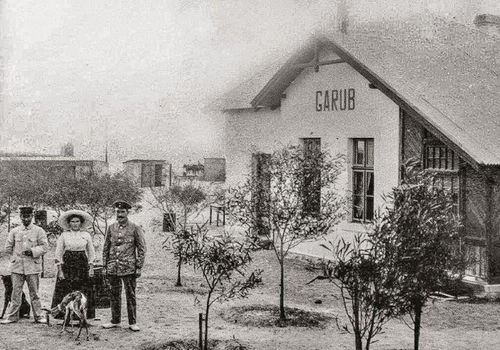 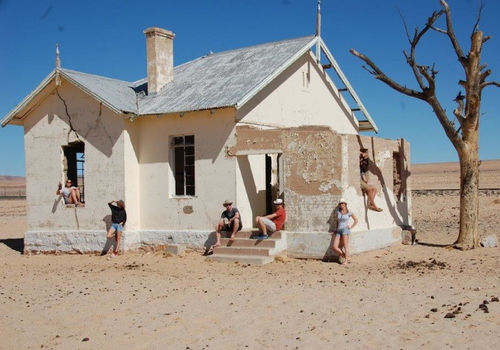 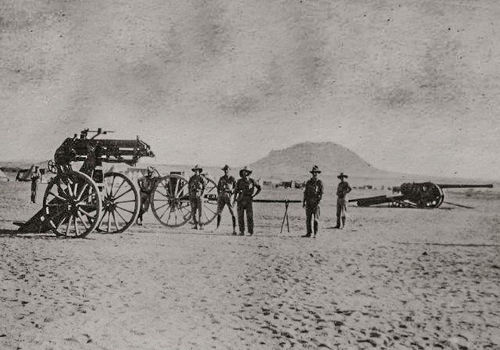 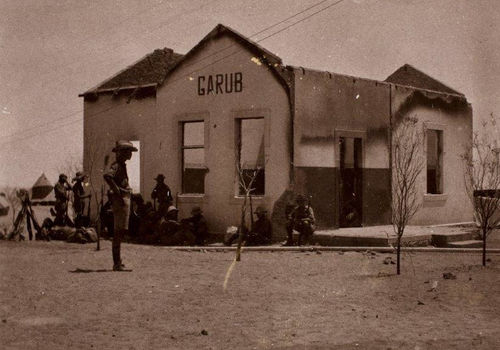 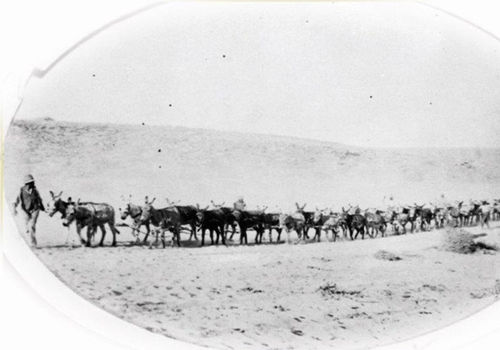