Often when I’m travelling in southern Namibia on my way to Klein-Aus Vista lodge, I make a turn at the Commonwealth War Graves on the outskirts of Aus. Rows and rows of WW1 soldiers are buried there, many of whom died not from confrontation with the enemy, but from the outbreak of Spanish flu. What always gets my attention is that soldiers from both sides - German and South African - are buried alongside one another. It makes a deep impression on me and I think there’s a lesson to be garnered here, especially in our changing world and with the arrival of the next pandemic on our doorstep.

It was a hundred and two years ago, on the 9th October 1918, that the first victim of Spanish flu was reported in the country. The devastating epidemic that had spread across the world like wildfire had finally reached South West Africa (present-day Namibia).

This little-mentioned pandemic was no small flu. It rushed around the globe with a vengeance. Between January 1918 and December 1920, it infected approximately 500 million people (a quarter of the world’s population at the time). Seventeen to 50 million people fell victim to its brutal onslaught, more than the casualties from both world wars put together.

After it took the life of train steward Mr J Bester in Windhoek, other casualties began to be reported. When Union of South Africa troops confronted the schutztruppe in German South West Africa at the onset of World War One, 250 soldiers from both sides were lost in the fighting. The epidemic that raged through the country killed ten times that amount.

It was spread via the transport routes: the railways, the waterways and the footpaths. It knocked the steam from populations whose immune systems had been weakened during the war with its stresses and food shortages, and when large scale troop movements were a regular occurrence.

It is uncertain where the epidemic originated. Some sources say that the respiratory virus had its beginnings in North America, while others suspect that it spread from a UK-troop hospital camp in Etaples, France, that housed a piggery.

Two ships, the Jaroslav and the Veroney, carried it to Cape Town. The South African labour contingents on board, who had been helping in the war effort, stopped en-route in Freetown on the west coast of Africa, where the epidemic was rife. In southern Africa, it quickly spread upcountry all the way to the Zambezi in southern Rhodesia. It claimed the lives of 140 000 people in South Africa alone.

Spanish flu put the world in crisis. It was blind to social boundaries and norms, and affected everyone equally, irrespective of race, nationality and religion.

Although the epidemic was vicious and swift, early reports in the UK, France, Germany, France and the US were censored so as not to lower the soldiers’ morale. Newspapers were, however, able to report about its effects in Spain, who was neutral. While far from its source in North America, the epidemic became known as the Spanish flu.

The tragedy brought good Samaritans out of the woodwork and people began to help each other across national and racial divides. The real heroes were the health-workers - the doctors, nurses, missionaries and nuns - many of whom also lost their lives.

People are always eager to pinpoint the area where the flu began, and the first casualty. This ‘patient zero’ as he is referred to, is thought to be an Albert Gitchell who died in Boston on 4 March 1918.

In the US, the hardest hit place was Bristol Bay in Alaska where forty per cent of the population perished. Generally, worldwide, the death toll was highest in the poorer countries, and everyone was affected, even the countries not at war. It is said that the fatalities are underestimated as many of the deaths, especially in the rural areas and across Asia, were unreported.

Spanish flu was not the first flu epidemic known to humankind. In 1830, Europe suffered from a fierce flu epidemic and in 1889 the Russian flu killed about a million people. These epidemics had their roots in the nineteenth century at the time of the industrial revolution when people left the countryside and flocked to the towns and cities. The rapid expansion and the crowded conditions were a fertile breeding ground for disease.

Doctors had no experience of how to deal with Spanish flu, and treatment included fresh air and sunshine, Epsom salt, castor oil, aspirin and bedrest.

Simply called influenza in southern Africa, the influenza pandemic arrived at a low point in southern African history after the Anglo-Boer War in South Africa from 1899 to 1902, the Nama-Herero uprising in 1904 to 1907, a period of severe drought and World War One (1914-1918). To top it all, there was the economic depression that arrived in the wake of the war.

In South West Africa, the main areas affected were the railway hotspots - Karasburg, Windhoek and Usakos - and the mining areas, Tsumeb and Swakopmund. The epidemic also spread its tendrils into the crowded township areas like the Old Location.

In southern Namibia it swept through the Aus prisoner-of-war camp, where German soldiers were interned and it affected friend and foe with equal measure.

Good Samaritans are remembered, like Gabriel (surname unknown) from Outjo for his selfless service with the ill and deceased, and Mary Ann 'Breeza' from Aus, the wife of Garrison Adjutant Major Edward Irving Nelson, who gave her life while helping to nurse both South African soldiers and German prisoners. As a tribute to her selfless commitment she was buried with military honours, even though she was a civilian. The inscription on her gravestone reads: ‘She gave her life while she wanted to help others’.

The influenza was also known by the Herero word ‘kapitohanga’, referring to the fact that it killed people faster than bullets. And, it did. It was urgent, ferocious and unstoppable. The world reeled, hospitals were overflowing and graves were occupied faster than they could be dug.

Epidemics will always be inevitable on the planet, and the devastation they bring will be determined by the world and the time period. They make us realise several things: that we need to slow down, reassess our priorities, value our lives, appreciate every moment and count our blessings. They also reveal with astonishing clarity that the whole world is connected.

If there is any lesson to glean from the cruel and swift Spanish flu, and one that is relevant for any era, it is that while we distance ourselves from others, fight our enemies for land, power and racial supremacy, in essence we are all one. 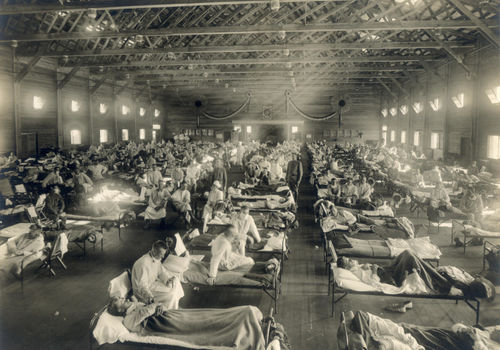