When travelling to Namibia’s famous Etosha National Park, why not also explore the northern areas beyond the King Nehale conservancy and another 100 kms or so to Ondangwa?

Although Ondangwa in north-central Namibia is some 700 kilometres away from Windhoek, it has developed into a busy economic hub. The traditional way of life of the mainly Oshiwambo-speaking community exists along side modern shops, supermarkets, car repair services and other amenities. Yet a few kilometres south-west of Ondangwa,lies a hidden historic treasure: the first mission station in the area at Olukonda, founded in 1870 and now a museum together with the house of the Lutheran pastor.

This was 150 years ago and the fact that the first missionary there, Martti Rautanen hailed from Finland, is the reason for a significant anniversary later this year near Olukonda. Preparations to celebrate 150years of Finland-Namibia relations are on the way. Olukonda and Ondangwa are a lovely day trip from the brand new Etosha King Nehale Lodge.

The Finnish Evangelical Lutheran Mission was founded in January 1859, after a decree by the Tsarof Russia, as Russia was occupying Finland at the time. Its first missionaries outside Finland were sent to south-western Africa (today Namibia), in 1868.. The country became a German colony in 1884.

The most well-known Finnish missionary in Namibia was Martti Rautanen, (nicknamed Nakambale, in Oshiwambo: the one who wears the hat), who arrived in the area of the Ongonda Kingdom in July 1870. He was given permission by the king to open a mission station. After humble beginnings, Rautanen moved a few kilometres to Olukunda in 1880, near the royal homestead. Here the construction of the first church for Oshiwambo-speakers began in 1889, with wooden poles and a that ched grass roof. Today, the church is the site of a museum.

Rautanen married Frieda Kleinschmidt in 1872. She was the daughter of the German missionary Franz Heinrich Kleinschmidt. The couple had nine children, many of whom passed away due to malaria at an early age. The family home, with a big study-cum-office is today a museum and visitors can still sense the pioneering spirit while walking through the rooms.

Rautanen translated the Bible into Oshindonga, one of the seven dialects of the Oshiwambo-people. He remained at Olukonda as the director of the missionary station and became a good friend of the Ondonga kingsduring the more than fifty years that he lived and worked there.The first Owambo pastors were ordained in 1925; exactly 55 years after Rautanen arrived. After 56 years of work at Olukonda, Rautanen, better known as Nakambale, died in 1926, at the age of eighty. One of Rautanen’s daughters, Johanna lived as a teacher at Olukonda until 1951. She remained there during her retirement and died in 1966 in the nearby Onandjokwe hospital.

By 1960, over a hundred Finnish persons were involved in missionary work in north-central Namibia. Following difficult times during the liberation struggle, during the 1980s there were only 14 Finns left. After Namibia’s independence in 1990, Finland became one of the major supporters of development in Namibia. The Finnish Missionary Society ceded their missionary work in Namibia.

The Nakambale Museum is situated in the former missionary house of Rautanen and mainly displays items from the Finnish missionary station,but also some artefacts of the Owambo culture. The collection includes household items, instruments and furniture of the missionaries. As part of the museum area, the cemetery of the Rautanen family can also be viewed.

The museum also hosts a complete traditional homestead of the Ondonga people. A guided tour can be booked. Some cultural performances can be arranged. These must be booked in advance.

North-central Namibia is most definitely an interesting area to explore.

Driving from Tsumeb northwards towards the Etosha National Park one can observe a never-changing landscape along the approximately 80 kms until the turnoff to Namutoni situated in the park. To round up a visit to Etosha on a different note, visitors can cross the vast Andoni plains northwards and exit through the King-Nehale-Gate near Oshivelo. The gate is named after a famous Ondonga-King of the Oshiwambo-speaking population of Namibia.

The more adventurous traveller might continue past the Namutoni turnoff for another 20 kms on the tar road until Oshivelo. It is the gateway to the rural north-central areas with white sands, omulunga palm trees, mahangu fields and cattle grazing among traditional huts and homesteads. Once having passed through the veterinary checkpoint gate at Oshivelo, the tar road towards Ondangwa passes the rural heartland of the central north. To the left is the fence of the Etosha Park and after a few kilometres the King-Nehale Conservancy begins, which borders ontothe Etosha National Park. Although covering only 508 square metres,over 20,000 people live in the conservancy which was officially registered in 2005. Visitors are welcome.Several antelope species can be found and traditional crafts are sold by locals.

The stretch until Ondangwa is about 100kms. Don’t miss the sign for Olukonda on the lefta few kilometres south of Ondangwa, to visit the museum 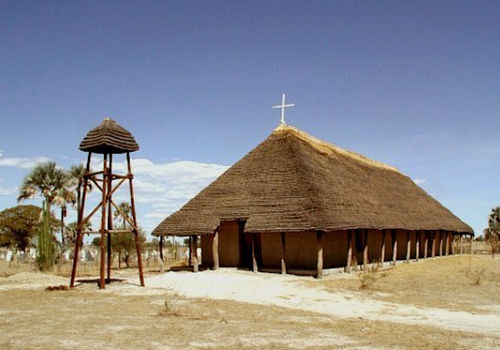