Namibian Economics To The Point - April 2020

Good and widespread rains fell in April, even in some areas of southern Namibia. Most dam levels increased, with dams around Windhoek now being filled to over 80 percent capacity.

Due to the Covid-19 pandemic, Namibia has also been under lockdown since 28 March. The lockdown is scheduled to end at midnight on the 4 May. Important events like the annual mining conference and expo, have been postponed. Namibian borders are closed except for the movement of essential goods and emergency travel. Airports are closed as well as schools and tertiary institutions. There are currently no sessions being held in Parliament. During the lockdown period, no employees may be retrenched.

So far, only 16 Covid-19 cases have been officially confirmed and no Corona-related deaths were recorded until 30 April.

The Namibian government has rolled out an N$8.1 billion (about 400 million Euros) support package for the local economy and the central bank dropped its repo rate by 100 basis points to 4.25 percent, the second time within three weeks.

The first consignment of Namibian beef arrived in the USA. Namibia is the first African country to export meat to the US. The 25-ton container arrived at its US destination on 17 April.

According to the Bank of Namibia’s latest financial stability report, published in April, the Namibian economy will shrink by 6.9 percent this year but is forecasted to grow by about 1.8 percent in 2021.

The inflation rate for March 2020 stood at 2.4 percent (February 2.5%), according to the national statistics agency.

No electricity tariff increases until mid-2021

The Electricity Control Board (ECB) has rejected the state-owned electricity utility’s application to increase bulk electricity tariffs by 3.9 percent from 1 July. NamPower applied to increase the bulk tariff from N$1.65 (about 8.25 Euro cents) per kilowatt-hour (kwh) to N$1.71 per kwh. The ECB rejected this, mainly due to Covid-19 and its impact on the Namibian economy and on consumers. The bulk electricity tariffs in place since July 2019 will thus remain unchanged until 30 June 2021.

At the beginning of April, the government announced a N$8.1billion (about 400 million Euros) economic rescue package for the economy, consisting of loan schemes, a once-off income grant payment for low income earners and value added tax (VAT) reimbursements to companies. This was announced by the new Minister of Finance, Ipumbu Shiimi.

An N$500 million loan (25 million Euros) scheme will be available and guaranteed by the government for non-agricultural small businesses that have experienced significant losses due to Covid-19. The Development Bank of Namibia (DBN) will provide these loans.

Some N$200 million (about 10 million Euros) in loans will be guaranteed by the government for farmers experiencing cash flow problems and small to medium agricultural businesses that experienced significant losses in revenue. These loans will be provided by the Agricultural Bank of Namibia. The distribution of N$562 million (about 28.1 million Euros) as an emergency income grant for persons who earn below the tax threshold, which is N$50,000 (about (about 2.500 Euros) per annum, has already begun. It is expected that over 300,000 persons will benefit from the once-off emergency grant payment of N$750 (about 37.50 Euros).

A further N$470 million (23.5 million Euros) in loans will be made available to taxpayers in the non-mining sector, borrowing up to 1/12th of their tax payments in the previous tax year at a prime interest rate less 1%. The government guarantees these loans, which must be repaid within one year. Loan applications must be made at commercial banks.

The Finance Ministry owes companies and self-employed persons a total of N$3 billion (150 million Euros) in VAT re-imbursements. Payments will be accelerated. Another N$800 million (about 40 million Euros) of unpaid invoices for goods and services that the government owes companies, will be paid soon, according to Shiimi.

Government released another additional N$1.1 billion (about 55 million Euros) for the Health Ministry to fight the Covid-19 pandemic.

While all private and some public schools as well as universities in Namibia quickly mastered new technologies like e-learning and sending study material via social media to school children and students, several government institutions moved to e-conferencing and virtual press conferences, including live stream.

The University of Namibia (UNAM) announced that there would be no mid-year exams for students at the end of the first semester in June, due to the Corona crisis lockdown. Marks will be assigned by calculating the average of marks received for assignments completed via e-learning.

Further, the international fur and pelt auction in Copenhagen, Denmark for April was cancelled and moved to online auctioning. The famous Swakara pelts from Namibia were as a result not shipped to Denmark six weeks in advance, but instead were auctioned online on 22 April. The Swakara pelts will be shipped directly from Namibia to buyers later in the year after the Covid-19 is over.

Meanwhile certain lock down measures were lifted in the last week of April for bookshops which also sell schoolbooks and learning material, as well as some clothing stores that are now restricted to sell winter clothing only.

Some informal markets in Ondangwa, Oshakati, Ongwediva, Katima Mulilo and Windhoek were allowed to open towards the end of April but may only operate from 9h to17h00 daily. No cooking is allowed, social distancing of one metre is mandatory and traders must have a trading certificate as well as wear masks and aprons.

Amidst the COvid-19 lockdown and the severely affected tourism industry, a successful ‘operation elephant’ was concluded this month. The elephant bull who had suddenly appeared on 24 December 2019 at the eastern outskirts of Swakopmund, then was driven to the Omaruru River but returned this February and settled in the Swakop River near the golf estate, was darted and transported to a new home. The elephant must have loved the coast so much that nearly every night, he walked down the Swakop River to the bridge where he munched on the reeds and reportedly also took a bath in the shallow pools near the beach. Unfortunately, this elephant’s curiosity also led him to damage some fencing and infrastructure of various small-holdings along the Swakop river outside of town.

The N$ 550,000 ((about 27.500 Euros) exercise to relocate the elephant was paid by none other than the family of US actress Angelina Jolie. Her first biological child together with actor Brad Pitt, Shiloh, was born in Swakopmund in 2006. The famous family often spends time at the N/a'an ku sê sanctuary outside of Windhoek. The Shiloh Wildlife Sanctuary in partnership with the N/a'an ku sê Foundation was established a few years ago. It paid for the relocation of the elephant, who was dubbed ‘Apollo’ by Shiloh Jolie-Pitt.

The nature conservation expert Garth Owen-Smith who was one of the pioneers of Namibia’s community-based conservancy system, passed away on 11 April aged 76, after a long battle with cancer.

This particular system links Namibian wildlife conservation with sustainable rural development and has since become a preferred model for wildlife conservation throughout Africa. South-African born Owen-Smith, worked in Zimbabwe and came to Namibia during the 1980s to further community-based conservation efforts in today’s Kunene region, formerly called Damaraland and Kaokoland. He was a key figure who became involved in also curbing random poaching in these areas, particularly the poaching of elephants and black rhinos. After Namibia’s independence in 1990, he co-founded the Integrated Rural Development and Nature Conservation (IRDNC) foundation, which became a leading NGO and also has projects in the Kavango- and Zambezi regions. Apart from several international awards for his conservation work, he also received the 2015 Prince William Lifetime Conservation Award from the Tusk Trust in London. In 2018, Prince William, Duke of Cambridge, visited the Kunene Region in order to learn more about community conservancies and anti-poaching measures taken. 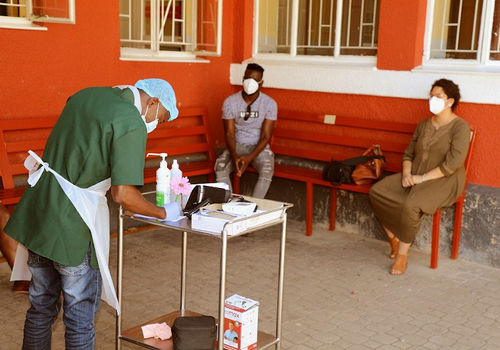 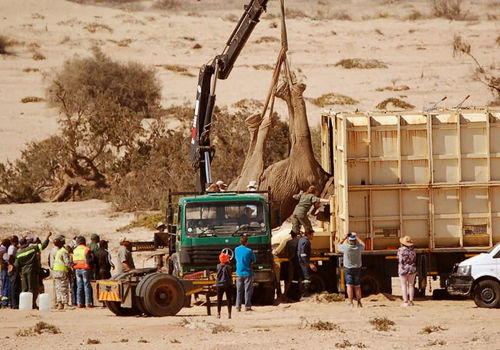