Namibian Economics To The Point – February 2020

Namibia has received widespread good rains in the second half of February, which also improved water levels of several dams. The high-level economic panel presented its final report to President Hage Geingob with recommendations for an improved economy. Namibia has started exporting beef to the USA. The Ministry of Environment and Tourism has started erecting a fence around Etosha National Park with its own staff members after bids of companies were regarded as too costly.

A Canadian company, which is mining gold in Namibia, has donated N$25 million (about EUR 1.51 million) for rhino conservation by selling specially crafted gold bars.

Renowned National Geographic magazine has selected Namibia among its top 20 travel destinations. Air Namibia has discontinued flights from Windhoek to Luanda on 9 February, saying the route was no longer viable.

Namibia’s central bank has lowered its repo rate by 25 basis points to 6.25 percent. The country’s inflation rate for January stood at 2.1 percent (31 December 2019: 2.6%), the statistics agency announced in mid-February.

The captain of an Icelandic fish trawler was fined N$950,000 (about EUR 57.5) for fishing in protected Namibian waters in the Atlantic Ocean. At the beginning of the year two Russian captains were also fined for similar offences.

Namibia exports beef to the USA

Namibia became the first African country this month to export beef to the USA. At the send-off ceremony for the first container, Foreign Affairs Minister Netumbo Nandi-Ndaitwah described the consignment as a milestone. Negotiations took 18 years. The factory that processes the meat for exporting underwent a thorough audit to verify compliance with the required US standards. The beef for the US does not have to be deboned, which shortens the packaging process. The exports are intended for fast food companies and retailers. This year some 860 tons will be exported to the US. The volume will increase to about 5,670 metric tons in the next few years.

In 2019, Namibia became the first African country to export beef to China. Other export markets for Namibia’s meat from free-range and hormone-free cattle are the EU and Norway.

The high-level panel on economic growth, which was appointed a year ago to analyse Namibia’s economy and make recommendations, submitted its report on 25 February. The chairman of the panel, Johannes Gawaxab, presented the report to President Hage Geingob, who will discuss it with his cabinet before the content is made public. "Our final report makes clear recommendations. Namibia faces serious economic challenges and our report contains bold goals,” Gawaxab told the media.

He also said that the report contains a 10-point plan with recommendations for macroeconomic stability, dealing with housing shortages, state-owned companies, mining and the fisheries sector,  civil service reform, a green emission-free Namibia by implementing the climate change plan drawn up in 2011, water and electricity supply.

Some recommendations are intended for implementation in the next 12 to 18 months. Medium-term proposals are to be incorporated into the 6th national development plan (NDP6). The high-level panel’s term of office ends in March.

The coastal company Walvis Bay Salt Refiners (WBRS) has invested N$93.6 million (EUR XX ) into a new salt-processing plant to expand its production. The company is the largest solar salt producer in sub-Saharan Africa. It pumps seawater from the Atlantic Ocean into ponds. The water evaporates over 18 to 24 months and leaves thick layers of crystalline salt. It is then harvested, washed, dried and processed to various grades and volumes for export markets. The managing director of WBRS, André Snyman, said that the company exports salt to Europe, East Africa and North America. The new processing plant increases production from 120 to 220 tons per hour. WBRS harvests salt from an area of 6,000 hectares and produces some 900,000 tons per annum.

The Ministry of Environment and Tourism (MET) will accelerate the erection of fencing around Etosha National Park by using its own staff and volunteers instead of contractors. So far, 118 km of the park’s border (total length: 824 km) have been fenced in and existing fences have been repaired in the past few years. Lack of funding was a major factor for the delay.  Bids by companies were very high and would have cost the taxpayers hundreds of millions. On 22 February, MET Minister Pohamba Shifeta launched the fence initiative at the north-eastern boundary of the fence near the King Nehale Gate. “Using our staff and in due course also volunteers, we envisage that the three-fold fence of varying heights with a more simplified design will cost us about N$173 million,” Pohamba said.

The Minister also launched the ‘Friends of Parks Programme’ that encourages the private sector, donors, volunteers and other stakeholders to get involved and support the development and management of Namibia’s national parks. In another move, MET received approval from the cabinet this month to promote conservation hunting and its benefits to local communities and the broader environment. To counteract increasing international pressure exerted by animal activists against trophy hunting, MET sought the cabinet’s for approval to disseminate related information to Namibian embassies abroad and collaborate with other countries in Southern Africa.

Namibia has become the first country worldwide where a mineral resource is used to save endangered species. The Canadian mining company B2Gold, through its Namibian subsidiary, has redefined conservation financing by donating 1 000 ounces of gold, valued at around N$25 million, (about EUR1.51 million) for rhino conservation.

“The donation represents the first time that gold, a natural resource from the ground, is being used to provide sustainable funding to community-backed initiatives for the protection of the iconic black rhino,” the president of B2Gold, Clive Johnson, said at a gala event. Johnson travelled from Canada to launch the initiative.

B2Gold is producing 1,000 limited-edition rhino gold bars to be sold to investors at the spot price of gold on the date of sale, plus a 15% conservation premium. The gold bars will be available in sizes of 500 grams, one ounce, and half-ounce, with an image of a black rhino cow and her calf imprinted on the reverse of the bar. B2Gold and an advisory committee including representatives from Save the Rhino Trust Namibia, Integrated Rural Development and Nature Conservation (IRDNC), Namibia Chamber of Environment and MET will manage income from the sale of the rhino gold bars.

A portion will be invested for long-term sustainable financing of black rhino conservation. Part so the money will also be used for conservation in the field, including support for patrols, intelligence activities, and to rural communities in areas where the rhinos are roaming freely. 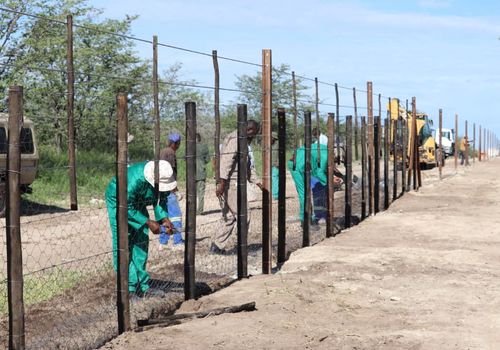 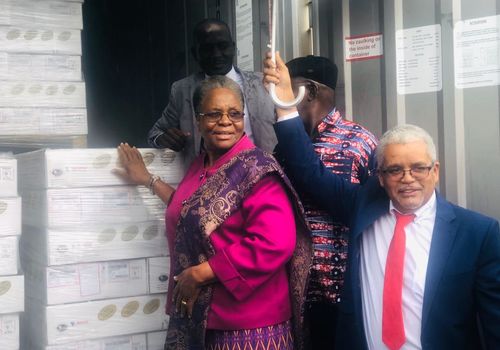 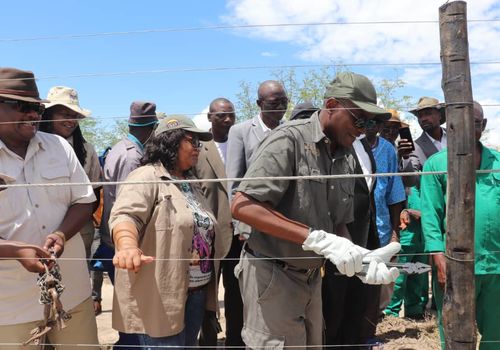 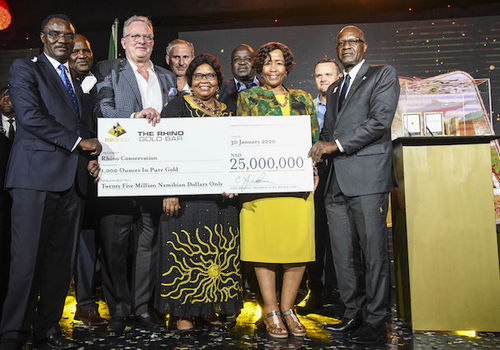