As Namibians endure their second Covid-19 lockdown with borders closed and international tourism hitting rock bottom, as economies worldwide hit an all-time low with people losing their livelihoods and struggling to feed their families, I recall the spinach myth of last century that reminds us how inaccurate figures can impact the entire world population. Because chemist Erich von Wolf misplaced the decimal in his research in 1870, the health benefits of spinach were vastly exaggerated, spinach-loving cartoon hero Popeye was born and children around the world grew up having to eat cooked spinach that was continually heaped onto their plates. I know, I was one of them. Could Covid-19 be a similar case of mistaken statistics?

I remember as a young boy being made to eat mounds of mushy spinach several times a week, in the school hostel and then lovingly prepared by my mother at home, all because Von Wolf erroneously recorded a century previously that the green leafy vegetable had 35 milligrams of iron per 100-gram serving, instead of 3.5 milligrams. It continued to be regarded as an essential strength-building food for growing children although the iron-rich benefits of spinach had already been debunked in 1937 when Von Wolf’s miscalculation was discovered and corrected. When I saw those heaps of green coming my way, I could scream until my lungs hurt, but it had no effect. I ate so much spinach in my youth that eventually I couldn’t stomach it any longer and my body revolted, hardly digesting it at all. It left my body nearly as green as it entered it. And, still I was made to sit at table until I had consumed the slimy heaps of green. Up until this day, I cannot bear the sight of spinach.

That the world swallowed Von Wolf’s inaccurate findings so naively, so thoroughly and so unquestioningly, even after they were proven faulty and corrected, may come as a surprise, but it did, and Popeye - created by Segar in 1929 - became one of the most popular cartoon characters of the twentieth century. Every time Popeye downed a tin of spinach, his muscles bulged and his strength increased, becoming the envy of all little boys and grown men. The Popeye cartoon series is believed to have increased spinach consumption in the US by one third.

Although the mistaken spinach facts were corrected 83 years ago, the spinach myth remains. We have difficulty adjusting our belief system to comprehend that the nutrient-rich leafy vegetable is by no means the superfood we once thought it to be. It clearly illustrates the difficulty of changing a narrative or a perspective once it has taken hold and once we have bought into it, no matter how mistaken it actually is. 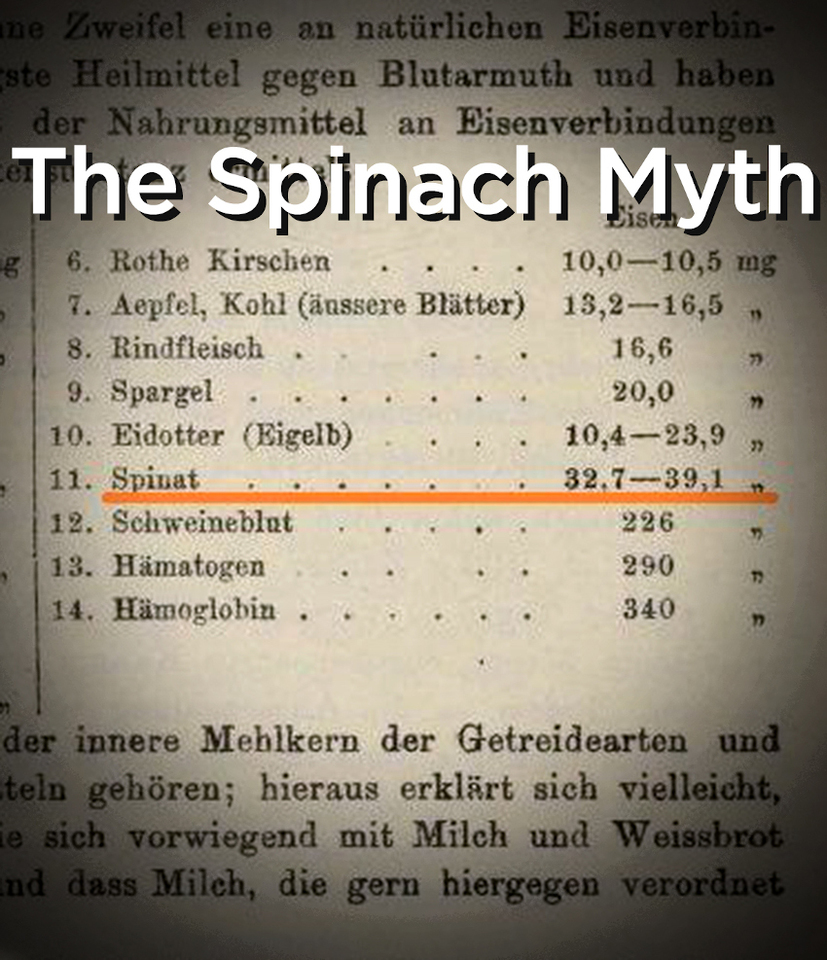 Can this relate to other mistakes, other faulty narratives that have taken the world by storm during the Covid-19 pandemic because of overly pessimistic modelling and possibly flawed statistics and incorrect assumptions and parameters? Will there be embarrassing similarities of misrepresentation as the pandemic cases that have rocked and stopped the world prove to be the result of exaggerated statistics? Although several countries have been hard hit by the pandemic, evidence has shown that unlike other percentages of fatalities that have occurred in human history, Covid-19’s is relatively low. The Black Death of 1348 claimed a third of the world’s population, the Spanish Flu of 1918 claimed 1-3%, the Asian Flu of 1957/8 claimed 0.03% and the Hong Kong Flu of 1968/9 claimed 0.10%. World War One had 1.2% fatalities and World War Two 3%. Covid-19 by the end of July had claimed 0.009% of the world population. (Namibia’s Covid-19 mortality rate is 0.0018%, meaning that there is a 99.99% chance of survival. Pretty good odds, wouldn’t you say?)

Times have changed. We CAN learn from our previous mistakes and realise that the figures we were given are not as sound or solid as they were initially thought to be - and rather than simply causing dietary distress to a few generations of small children, have much more dire and lasting consequences. And that we CAN reverse the narrative of fear and destruction that has been disseminated by the media. It IS time to readjust our belief systems and to recalibrate - and, ultimately, to reclaim our lives.

Thousands of people are demonstrating in Germany against Covid-19 restrictions, companies worldwide are increasingly challenging governments over continual lockdown periods that have unnecessarily destroyed businesses and livelihoods, and many people are questioning the vast exaggeration of the Covid figures. The human population has simply had enough of having to swallow distorted statistics as they watch everything they’ve worked for over their lifetimes crumble around them. With no disrespect to the humble and generous spinach plant, we are sick and tired - or as the southern Africans say - we are ‘gatvol’ of swallowing spinach!