Meeting Namibians On The Journey From Swakop To Palmwag And Epupa . . .

The journey from Gondwana’s Delight hotel in Swakop up the famed Skeleton Coast to Palmwag and then northwards to Omarunga-Epupa Falls Lodge provided a wealth of spectacular landscapes and fascinating stops, but - importantly - it also provided the opportunity to meet some of Namibia’s beautiful and colourful people. Sometimes, because of a lack of a common language, we had to use gestures and hand signals, but we still managed to communicate. It reinforced my belief that meeting the people in a country gives you invaluable insight into a place, enriching your journey – and that the ultimate passport of travel is the smile.

Hilga poses at the gates whose daunting renderings of skulls and crossbones are enough to make you feel as if you are travelling into no-man’s land. They’re not daunting for Hilga, whose smile lights up the day. For her, it’s just another day at the office.

Willibard started working on the roads in 1979 and has driven bulldozers, forklifts and graders for the last thirty years. His work has taken him from Otjiwarongo to the Owambo, Kavango and Zambezi regions. Although the work is hard, Willibard says that the wildlife in the north-western corner of Namibia - where lions and elephants are free-roaming - makes the job dangerous. Willibard fortunately sleeps safely in the back of the grading truck, has a small solar panel to charge his light and cellphone, and usually works with a teammate.

Erwin Tamiseb at Bergsigpos has decorated his family’s roadside stall with windmills and old cold drink tins that shake and rattle in the wind. Erwin says that he often sees elephants that drink from the nearby farm’s reservoir.

Hans Gomeb, the security/night guard at Palmwag Lodge enjoys his job. He walks guests staying in the far tented rooms back to their accommodation at night. With no fences around the property, Hans keeps his eyes open for the resident ‘house elephant’ Jimbo, who often wanders through the grounds at night to snack on the trees, and for hyenas, leopards and lions that have on the odd occasion ventured in. He is not scared of them. It’s part of life for him as it is for the residents of the conservancies, who live in harmony with the free-roaming wildlife. “Atatata,” Hans says. “I know the animals and their behaviour. I grew up with the animals on a farm in the Khorixas district.” He talks to Jimbo the elephant like a friend and tells him that he can pass ahead. When he does, then Hans continues with his guests. “He’s friendly,” he says, “but you mustn’t get too close. He is still a wild animal.”

School girl Veriuondjozea Muharukua hails from Orotjitombo and is in grade 10 at the secondary school in Opuwo. She loves song and dance, and is planning to be a nurse. She spent the weekend with her brothers thirty kilometres south of Opuwo cooking for them and collecting grass from the mountains for their cattle. Thirty of their hundred cows have already died because of the drought. Veriuondjozea is proud to be a Himba and when she is not at school proudly wears her traditional Himba attire.

A Himba herder along the roadside in the Huab valley, where some of the Himba have moved their cattle to try and find some grazing. We had no mutual language, except gestures, hand signals and smiles.

A Himba woman who flagged me down for a lift en route to Epupa. We battled to communicate, struggled with things like safety belts and opening and closing car doors on the dusty road, and then we both burst out laughing realising the absurdity of the situation and just enjoyed the journey.

According to Epupa curio trader Venomambo Kandimine, the names of those who have died in the river are carved on the trunk of the baobab growing from the rocks by the falls. The names include those of tourists who have fallen in, and those who haven’t heeded warnings not to swim in the river and have been swept away by the currents or have been eaten by crocodiles.

Vemutanda Nguheiwe (Staygon) Ruiter – Kaokoland guide at Epupa: Ruiter, as he is known, started guiding in 2000. He says, “I was guiding what I know. I am Himba and grew up with the Himba traditions and culture.” Ruiter is one of the Kaokoland Guides who take people to visit the Himba villages around Epupa and is indispensable with his comprehensive knowledge and respectful attitude. He supplemented his understanding of Himba culture with courses from Wilderness Safaris and the Namibian Nature Foundation, learning the names of birds and plants as well as basic first aid. Interestingly, Ruiter has Dorsland trekker blood. His grandfather was Johannes Ruiter and his great grandfather or ‘oupa grootjie’ was Oom Tom, a well-known Dorsland trekker.

The Kaokoland Guides comprise eight freelance guides who offer their services to visitors staying at the Epupa lodges, taking them into the Himba villages and on guided walks along the river to spot birds and crocodiles. A percentage of their earnings is given to the association for training the younger guides and to supply marginalised communities with food. 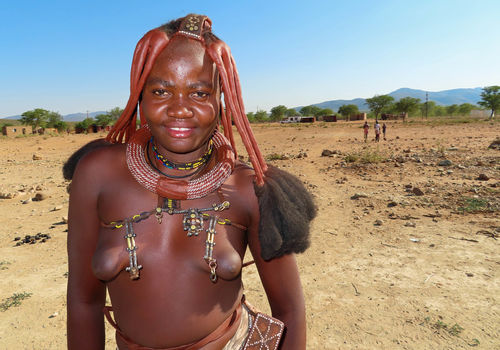