Brötchen- Well-known And Popular To Eat In Between

Elongated, with an indent and various colours defined by dough type and flour dusting, filled with cheese, cold cuts or even meatloaf – voila, the ‘brötchen’, ladies and gentlemen. Or to the non-Namibian community, a bread roll.

Add a cup of coffee and suddenly the world is a much better place. In Namibia, brötchen are the epitome of a small mid-morning coffee break, business meetings or as a snack on the go.

Introduced in Namibia by German settlers over a hundred years ago, the rolls, "bretsjen" (Afrikaans), "brottchen" (with an English accent) or "rolls" (small rolled-up pastries) have become a household name and are familiar in other language groups. At many fast food stalls, you get brötchens. Smart sole “entrepreneurs” buy dry rolls from bakeries in Windhoek very early in the morning, top them with delicious fillings and sell them carefully packaged to employees in various company offices. An informal dealer in the south of Windhoek rides a bicycle on weekdays - basket in front with a large bag of dry brötchen, margarine, cheese and cold cuts in his "Coolbox" on the luggage rack - and fills the brötchen as per the his customers’ requests, right in front of them along the roadside.

At company celebrations, brötchen are ordered en masse, which are nicely decorated on large platters and enrich the buffets. Sandwiches come in second, at best . At home, fathers buy large bags of fresh brötchen over weekends for a cosy family breakfast.

Many names - one term

The term ‘’brötchen” has prevailed in this country. There are also other, common brötchen in Namibia, i.e. wheat brötchen, but also milk brötchen, rye and rye-meal brötchen , poppy seed brötchen and sesame brötchen. Other innovations are maize brötchen, Portuguese brötchen and ciabattas. A Windhoek supermarket even offers ‘Mamma Mia’ brötchen and pitch-black coal brötchen.

However, there are also soft creations that do not have a crispy crust and boast a soft, doughy (almost fluffy) interior. Each brötchen type has its own, dedicated fan base.

During the inland raining season, the otherwise crispy brötchen can suddenly become 'pap' (soft), as they say in this country. And at the coast, your brötchen will taste different anyway. It is important to get the freshly baked delicacies, warm from the oven at the bakery in a paper bag and eat them quickly.

There used to be a variety of small bakeries in Namibia, that (unfortunately) gradually disappeared when supermarkets established their own bakeries. A small bakery and café has been in Outjo for years, these bakers having learned from the German settlers themselves. En route to Etosha National Park, pop in for a coffee break and quickly eat a brötchen. Since inception, the café has enjoyed major modernisations but its popularity remains.

Brötchen from the petrol station, an insider tip

You have to embark on a journey of discovery to find your favourite type of brötchen in Namibia A more recent discovery is a small bakery housed in a petrol station in the Eros suburb of Windhoek. Customers come here on Saturday mornings from more distant suburbs to get rolls for breakfast. The shop is also buzzing on weekdays, as many of the working class get sandwiches there. A large publishing house with three newspapers is practically next door; hungry journalists are there every day. A small chat with other customers and the staff when queuing is a given. Bread and baguettes are also baked there, and everything is usually sold out by noon.

"Those who come too late are punished by life," said Mikhail Gorbachev once.

Le Pain Café opened its doors five years ago and is a family business, in conjunction with the petrol station. "Since I was ten years old, I've been dreaming of having my own café on the corner - but in Paris," says Stephaan Coetzee, passionate baker and son of the petrol station manager. After school, Coetzee trained at a renowned culinary academy in South Africa, and the curriculum included baking.

He gained further experience overseas, returned, but initially worked in his father's construction company. “Starting your own bakery is expensive, I gave up my dream with Paris, I'm Namibian. In 2014, the lease with the petrol station came up and the small shop, the room in the back was just made for a small bakery, I started very small,” he recalls. "We bake with sourdough - we do not produce bread rolls with additives. It is different and exciting every day how the dough changes, even in summer and winter, you have to add more and less water, the consistency has to do with the

weather.” He trained his local bakers himself. No matter whether Herero- or Oshiwambo-speaking, they routinely bake German-style rolls with a central indent, crispy on the outside, soft on the inside and dusted with flour.

It depends on the shape

Rather small brötchen are baked in a certain bakery and café in Swakopmund, they are round and make you do a double-take. They taste great. Some usually make short work of it and order a second or even third one to go with it.

By the way, in Germany there was a mandatory brötchen standard regarding weight and length until 1957, but not in Namibia. Nevertheless, brötchen in Namibia usually weigh up to 100 grams - without toppings - and are usually eight to ten centimetres long. Preferences are known to be different and the brötchen selection for the peckish residents and tourists alike remain even after over a hundred years of baking tradition in Namibia. 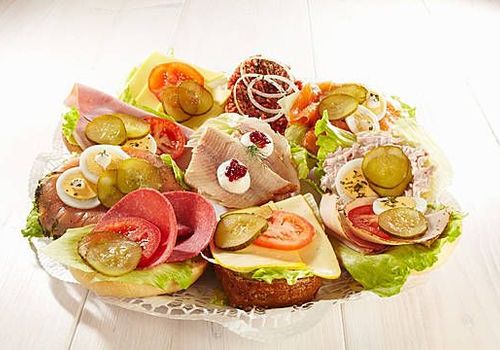 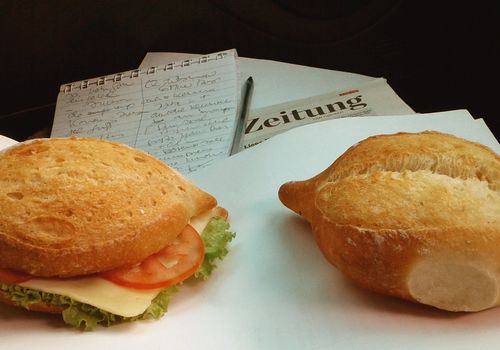 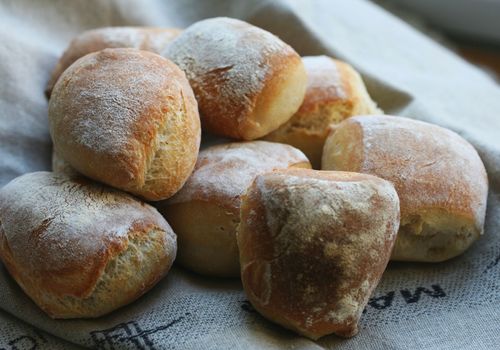