The Tsauchab River rises in the Naukluft and Tsaris Mountains and flows through the Sesriem Canyon and beyond. It is an ephemeral river that crosses the Namib Desert, but does not reach the ocean because it is blocked by the northern movement of dunes, called Sossusvlei. The name Tsauchab is derived from the Nama language and refers to the 'river where there are many Salsola bushes'. Salsola plants are commonly known as ganna, and are found all along the river and at Sossusvlei.

The low-lying Tsauchab penetrates deep into the sand dune sea, supporting a wider variety of plants and animals than the surrounding dunes and gravel plains can on their own. The bitter plant grows in the river, it has green leaves and although it is a bit of a drab looking plant, it binds and stabilities the sand. It can also be found on road verges and the bitter bush can be an indicator of heavy grazing. Meat and milk of animals who have fed on the bitter bush develop an unpleasant bitter taste – hence the name! Crush a leaf and you will smell a strong, herb-like aroma. Lappet-faced vultures use the thin, strong, lightweight stems to build nests. The small, pretty flowers are a reddish-purple and the dried flower heads resemble fluffy bristles.

Springbok and gemsbok feed on large tufts of river Bushman grass that grow in the Tsauchab's river bed. This drought-resistant climax grass, can reach up to 2m high and like the bitter bush it stabilizes the silt, sand and organic material. Larger trees of the river are the camelthorn and buffalo thorn, with associated hollows, where animals such as gemsbok, hyena and jackal shelter from the dominant south-west wind of the former.

The false ebony tree also grows on the Tsauchab. It is a medium-sized tree with drooping branches and is an important shade tree; stock and game browse the foliage. Male and female flowers are on separate plants and the small pea-like black fruit is edible, although not very tasty by all accounts, but the birds love them, especially when they turn brown. The heartwood is another tree growing on the Tsauchab, it is black and hard, hence the name, thornless and evergreen, and it is recommended for gardens, growing easily from seed and requiring very little water.

The ringwood grows on the riverbank as does a smelly shepherd's tree. On the banks there are several large specimens of leafless cadaba, Cadaba aphylla. This is a twiggy, tangled shrub or small tree, with long leafless branches. The butterfly leaf is another well-browsed plant, favoured by many animals and the plants are well-utilized, even the thinner stems are eaten.

The common thorn apple, Datura stramonium, originally from north America, is a large-leafed plant growing in the river bed. The flowers are large, up to 10cm long, with white, mauve or pinkish petals. The seedpods are an ovoid capsule with many spines.

An unusual plant in the area is a large sycamore fig, one of the larges fig trees in southern Africa (5-25m). It has characteristic large sandpapery leaves, the figs are about 2.5cm in diameter and are eaten by birds and mammals. The leaves, bark and latex are used to treat a number of ailments. In days gone by, the bark was used for tanning and dying skins. 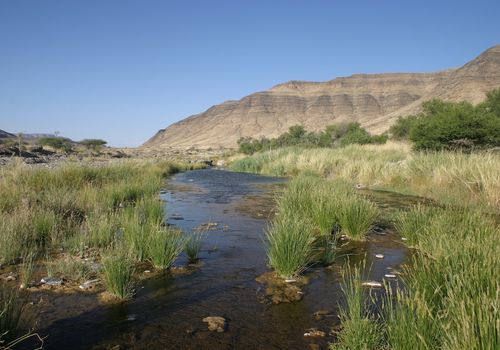 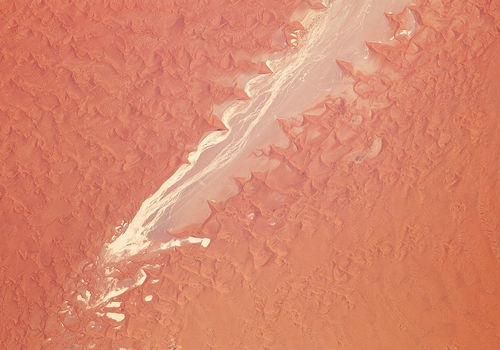 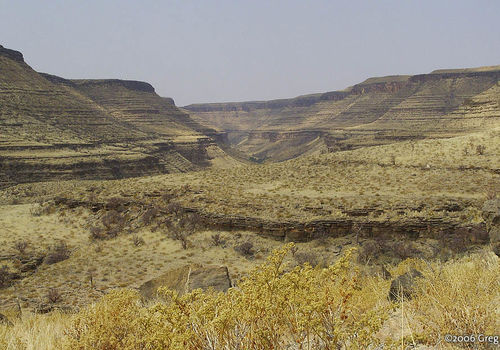