Rising in the central Angolan highlands, and east of the Kunene River, is the Kwando River, which forms the boundary between Namibia, Angola and Zambia. After making its way through the Caprivi Strip, it flows along the border of Mudumu National Park, before disappearing into the Okavango River in one direction and breaking up into a labyrinth of channels, islands and oxbow lakes, to form the vast Linyanti Swamps in another. Quite a journey!

The river is the lifeblood of this region of the Caprivi, and the Kwando's waters nourishes the land. Elephants and hippo, spotted-necked otters and crocodiles all share and love these waters, and the rare red lechwe and sitatunga tread warily. Local fisherman skillfully pole their mokoros (dug-out canoes) as they cast their nets for tilapia; further along the river is the swirl of the fanged tiger fish and the ripples of turtles.

After spring rains in the Angolan highlands, the Kwando rises, sometimes by as much as 2m, and subsequently inundates the floodplains that surround the forests in Mudumu National Park. The new grass nurtures large herds of plains animals, most notably Burchell's zebra and impala. The Kwando's rapid rise also nourishes papyrus beds and marshland that act as fish nurseries, and serve superb wetland bird habitat. Roughly 430 bird species have been recorded in the region, including cranes, storks and the sacred ibis that forage in marshy ground. African jacana walk on floating vegetation on lily-covered pans, and frequently chase each other in short dashes, racing across lily beds on broad webbed feet.

Soak up the charm and excitement of the Kwando River with a stay at Lianshulu Lodge, set on the banks of the river, nestled beneath a canopy of shady jackalberry and mangosteen trees. Hire a boat at Mazambala Island Lodge to catch Tiger Fish, bream, nembwe, squeaker or barbel. Or if you fancy something a little more adventurous, then zip up your tent in Bumhill campsite to the sound of sloshing water, frogs croaking, hippo's chuckling and the occasional roar of a lion! 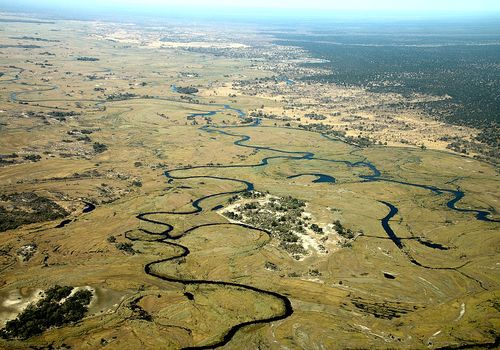