In the north of the country, the mighty Kunene River forms part of Namibia's border with Angola for about 325km (202miles). Winding through a primeval landscape, the Kunene is characterized by thundering waterfalls, raging white-water rapids and tranquil streams.

Green turtles are encountered year round at the Kunene River mouth, but there is no confirmed nesting in Namibia. It is the second largest marine turtle growing to 1.5m. The adult feeds on sea grass and algae.

Epupa Falls: The Epupa Falls (Herero for falling water) are about 190km upstream of the Kunene River mouth and is one of Kaokoland's most breathtaking sights. It is here that the river fans out into a number of channels before cascading into a deep gorge. This dynamic series of falls and cascades are ushered through a 500m wide series of paralleled channels, dropping a total of 60m over a distance of 1.5km. The greatest single drop measures at 37m and is commonly identified as the Epupa Falls. The best time to visit is in April and May, when the river is in peak flow.

There are some pools above the falls, very popular with visitors, that make natural jacuzzis and safe from crocs in the eddies and rapids. Hang onto the rocks though and keep away from the lip of the falls, once you're caught in the current there's no way from being prevented from being swept away.

Ruacana Falls: Another notable attraction of Kaokoland, is the well-known Ruacana Falls, situated some 120km (74.5km) upstream from Epupa Falls. Ruacana takes its name from the Herero orua hakahana (the rapids) and they lie 15km west of the town of the same name. To visit the gorge, visitors must temporarily exit Namibia by signing an immigration register.

This feature is dry for most of the year, but after good rains the Kunene becomes an angry, thundering mass of water that tumbles into the grateful 120m (194ft) deep gorge. The Ruacana Falls are one of the country's most splendid natural wonders, but as a result of the construction of Angola's Calueque Dam, 20km away, the flow is controlled by an intake weir 1km above the falls. As a result, it is best to view them in the rainy season, (March or April) when water is released over the spill way. 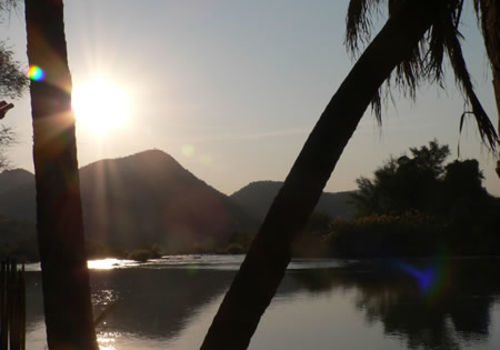