Rising in the Khomas Hochland near Windhoek, the Kuiseb River is a 'linear oasis', an ephemeral river that crosses the Namib Desert just like the Tsauchab River, but no longer reaches the sea, as it has been blocked by the northward movement of dunes. It has its headquarters in the central highlands near Windhoek, and whilst the basin area covers an area of more than 21,000km², most of its water originates from the annual 100-350mm of rainfall in the 6,600km² east of the escarpment.

The Kuiseb serves commercial farmers in its upper reaches, the Namib-Naukluft Park and the Topnaar community in the middle reaches, and the town of Walvis Bay along the coast. The river also has provided water for Swakopmund and several mines in the past and, in case of uranium mines and prospecting activities, continues to do so to this very day. The Kuiseb can be called a typical Namib Desert river catchment with agriculture in the upper reaches and in some cases, a dense human population near its mouth. The river valley forms a canyon, from where it leaves the escarpment to about the area of Homeb, and vegetation gradually increases as the riverbed widens. Downstream of Homer there is a floodplain of varying width, with fairly uniform perennial woody vegetation to where the river course peters out, and is broken up by small sand dunes.

For much of the year it is typically dry, and is little more than a broad, sandy riverbed, flooding only when sufficient rain fall in its catchment area. Normally, it only flows for 2 or 3 weeks a year and only ever gets as far as Gobabeb, and seeps into the sand before reaching the sea. Although the river ends in the dunes near Walvis Bay, it may still force its way through the dunes to the sea due to heavy flooding.

Records show that this happened in 1934, flowing for several months, and once again in 1963 the Kuiseb breached the dune barrier to reach the sea. What a sight that must have been! In 1997, the water almost reached the Walvis Bay salt works, but was diverted by a hastily bulldozed wall. In April 2000, a small amount of water reached the Walvis Bay Lagoon and in 2006, a year of record rain falls, the river was in flood, but failed to reach the sea.

Along the 135km of river that has been surveyed, from upstream Homeb down to Rooibank, a total of ten woody plant species grow. Acacia erioloba, Faidherbia albida, Tamarix usneoides, Euclea pseudebenus, Maerua shinzii and the Sycamore and Namaqua rock fig can be found in the river bed. A bright green bush, salvadora, is also an important part of the Kuiseb environment and the

!nara occurs on the banks and extends well into the dunes.

Other non-woody plants that grow in the Kuisebs riverbeds include the ephemeral species such as Vahlia capensis, Walafrida saxatilis, Lobelia nuda and Limeum sulcatum. All of these grow in the sandy riverbed and depend on moist conditions near the surface, but they die off annually as the water table drops.

The Kuiseb River generally flows each year some time in January, February or March. Once it has stopped flowing, water remains in scattered pools, which in time gradually dry up. At the end of the rainy season, only open water in the narrow regions of the Kuiseb Canyon remain.

The Kuiseb Canyon: On the Gamsbok Route, west of the Khomas Hochland, the Kuiseb River carves a spectacular feature called The Kuiseb Canyon, and it enters the Namib-Naukluft Park, about 165km from Swakopmund and 230km from Windhoek. It is a wild landscape of badlands, criss-crossed by a maze of dry river courses, which eventually make their way to the Kuiseb River.

Overlooking the canyon, is the Carp Cliff. The view from here is spectacular, especially in the late afternoon when the canyon walls take on a fiery orange shade, as the last rays of the sun disappear over the horizon.

There are a number of game species to be seen here, and it is home to klipspringer and even leopard. Spotted hyena are often heard at night and jackal make a good living from the herds of springbok on the plain. The canyons upper reaches are uninhabited, but where the valleys broaden out, scattered Topnaar Khoi-Khoi villages can be found on the north bank. 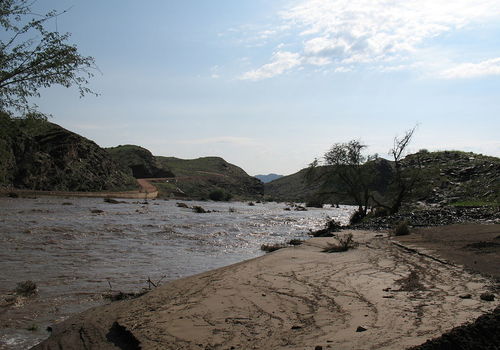