Namibia is diverse and spectacular, desolate and unforgiving. For many the excitement of game viewing will revolve around larger mammals, rare and exotic birds or a beautiful array of fascination sea creatures. There is one other class of animal that earns its wildlife stripes the country over; often feared, much admired but usually avoided - it is none other than the world of reptiles.

A reptile is an animal that has dry, scaly skin and breathe through lungs. They are classed as a vertibrates (animals that have a backbone).

Reptiles that live in Namibia include:

Habitats play an incredibly important role in the life and survival of reptiles. Namibia has 5 different categories of vegetation types: desert, Nama Karoo, succulent Karoo shrubland,arid savannah and moist savannah. Each biome experiences mainly a temperate climate, contrasting wildly in seasonal rainfall and temperature. In turn, these meteorological boundaries affect who lives where and for how long, including every reptile, large or small.

As reptiles are cold blooded they obtain their heat externally (as opposed to internally as with humans and birds) usually from the sun, by basking. They can then absorb the warmth from the environment and commute between sun and shade to maintain a constant and favoured temperature. Burrowing species take advantage of hot surface layers of soil or rocks warmed by the heat of the sun to gain heat.

Most reptiles reproduce sexually, mating during the spring. The young are born in summer. All turtles, crocodiles, as well as some as some snakes and lizards are oviparous - females that lay eggs that have shells. Only a few species of reptiles provide care for their eggs or young although amongst pythons and some skinks, the female wraps her body around the eggs to assist in the incubation period.

There are more species of reptile than mammal in Namibia. Reptiles species number 256 (with 112 species within Etosha National Park and 95 in Namib-Naukluft Park) as opposed to 186 land and sea mammals. Snake species number 92. Pythons attract an enormous amount of fascination and as they are attracted to water they will lurk in the reeds of waterholes waiting for an opportunity for a meal. Cobras, puff adders and the black mamba add to the reptilian mystique and are regularly seen crossing roads or at waterholes. The dry river beds of the Namib Desert are host to the occasional chameleon as well as the black-necked spitting cobra.

Namibia has the 2nd highest species of tortoises in the world with 7 (after South Africa with 12) and the reptile richness continues with over 135 species of lizard, with 54 known or expected to occur in Etosha. The most frequently seen lizard is the tropical button-scale lizard. These wonderful little creatures are found on walls of buildings demolishing the insect population, usually in a bungalow in Okaukuejo, Onkoshi Camp or Namutoni. Geckos, agamas and chameleons abound, with wide distribution areas that include both the Namib and Kalahari Desert, the central highlands, the Zambezi Region (formerly the Caprivi Strip) as well as all of the major national park such as Etosha, Bwabwata, Chobe, the Okavango Delta and Moremi Game Reserve (the last two being in Botswana).

Without doubt the reptile of all reptiles has to be the crocodile. Reaching a maximum of length of nearly 6m and weighing up to 1,000kg, this species will take large game including man. Best to hop on a boat cruise along the Chobe River, a mokoro trip in the Okavango Delta or from the safety of a 4 x 4 self-drive tour along the riverbanks of the Zambezi or Chobe Rivers to get the best views!

Frogs are the oldest known amphibians. They inhabited the earth over 200 million years ago and thousands of species of frogs and toads have developed from their ancestors. These small, tailless animals have characteristic bulging eyes and strong hind legs that enable them to leap distances far greater then the total length of their bodies. They are highly adaptable to any environment and can be found all over Namibia; in lowveld or highveld, the Namib Desert, forests, mountains and in coastal regions.

Some species spend their entire life in or near water, others spend part of their life as a water animal and part as a land animal, whilst others live mainly on land and find water to mate. Certain species of frogs can climb and dwell in trees (they have sticky pads on ends of fingers and toes) and others are burrowers that live underground.

Frogs are Namibia's only amphibians. They do not drink water though. Around 51 species are thought to occur in the country. Some 16 species have been recorded in Etosha National Park. They spend most of the year underground in Etosha in dried mud, waiting for the next rainy season. None of them are truly aquatic as they do not depend on water throughout the year. All species avoid the pan as it is too salty.

The Giant African Bullfrog is the most commonly observed, but only in periods of brief rain to breed. Once they are above the surface the race is on to consume enough food to sustain them through the dry winter months. Frogs are cannibals though and can swallow any animal it can fit into their mouths. Other species found in Etosha include the bushveld rain frog, ornate frog and Namibia's rarest, the spotted rubber frog.

Amongst the leopard and mountain zebra tracks of the Naukluft Mountains, amphibians are common. River frogs abound amongst the fountains and pools of crystal-clear water. Large tadpoles are more easily observed than adults and the sound of marbled rubber frog precedes their appearance. Common platanna reside in remaining Naukluft pools or in the ephemeral Tsondab River. Widely distributed and close to the dunes is the tremelo sand frog.

The desert rain frog is an inhabitant of the Sperrgebiet, one of Namibia's true surviving wilderness areas. Those fortunate to have lived and worked there can appreciate this vast stretch of the Namib Desert. Banned for public access due to diamond mining restrictions, the rather unusually attractive desert rain frog can emerge form their underground hide-outs for short winter periods when the winds have died. They enjoy cooler temperatures and take advantage of the seasonal moisture.

Almost all frogs have the same body structure less for variable size and colour differences. Females are invariably larger than males. Front legs are short, hind legs are large and the body and head are flat and bereft of a neck. The tongue is attached to the front of the mouth, a feature that allows them to flick it out quickly to capture prey. They have internal organs such as a heart, liver, lungs and kidneys and although frogs breathe by lungs, they also breath through their skin.

The skin is thin and moist and many species have poison glands in their skin which irritates an attackers mouth, causing the predator to release the frog. There is only 1 species of frog that has hair (the African hairy-frog, what else?) and some species can change colour with changes in temperature, light and humidity.

With such large eyes, you would expect frogs to have good eyesight. Their eyes bulge out enabling them to see in almost any direction to capture food and stay safe. Frogs that hunt at night have a better sense smell than those that don't and they have a delicate sense of touch, particularly when in water. Tongues and mouths have numerous taste buds enabling them to spit out bad-tasting food.

Species such as the painted reed frog are very beautiful. Unfortunately frogs have been branded as cold and slimy, ugly and repulsive but a different opinion can be formed if they are handled and studied a bit. There are no poisonous or dangerous frogs in the country and you won't catch warts from picking up a toad either!

Frogs are difficult to recognize. They make distinctive sounds, as do birds, calling out to females in the mating season in a louder voice than that of a female. To find a frog it is best to go out at night (or in the rain) with a torch. This is not advisable if you in the Okavango Delta when other potentially dangerous nocturnal creatures are around doing the same thing (less the torch) but many species are likely to occur in the vicinity of lodges and camps. So after your traditional early morning or late afternoon game drive in Etosha National Park or Naukluft National Park, it might be possible to go on an accompanied night 'frogging safari'.

There are 3 stages in the life of a frog. Egg, tadpole and a 4-limbed adult. Most frogs mate in the rainy season in water. The male will enter first, probably as a sign of bravado, to attract some mates. Females will only respond to calls from the same species and they are grasped by the males as soon as they enter the water before clinging to her back. The male then fertilizes the eggs in this position and they will hatch between 3 to 25 days afterwards, depending on species and temperature. A tiny tailed animal, known as a tadpole hatches from the egg.

The tadpole is not completely developed when they hatch. They resemble tiny fish and breath through gills. Their form changes as they grow. Hind legs appear first, enabling them to swim and feed on plants and decaying animal matter, frog eggs or other tadpoles. Once the digestive system has changed they can eat live animals. The tadpole will then lose its gills and its metamorphosis (change) takes place into a tiny frog. Most tadpoles change into adults within 8 to 10 weeks. Enemies of tadpoles include platannas, water tortoises, fish, dragonfly larvae, water beetles, water bugs and water scorpions. Adult frogs eat mainly insects and other small insects such as earthworms, minnows and spiders.

Frog or a toad? Toads are one of the frog families. It is deemed incorrect to separate the two. One is an Order (Frogs), the other is a family within that order (Toads).

Both frogs and toads swallow their prey in one piece.

Frogs teeth are mainly in the upper jaw.

Toads do not have any teeth.

Toads have a drier skin that frogs.

The body of a toad is broader, flatter and darker than a frog's.

Toads are covered in warts.

Most toads live in land. Adult toads go to water only to breed.

Frogs benefit humans in many ways. The consume large numbers of insects, which could become pests. Their legs provide us with food, the legs of larger frogs are considered a delicacy in many countries. There are 12 families of frogs found in Namibia 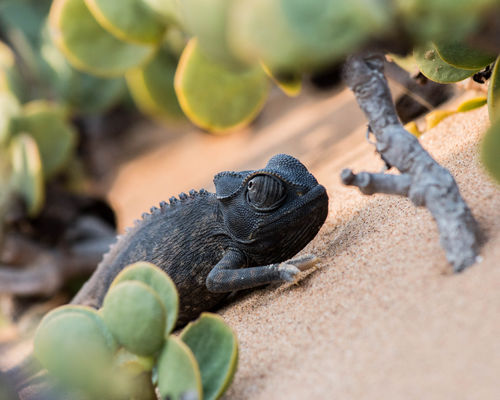 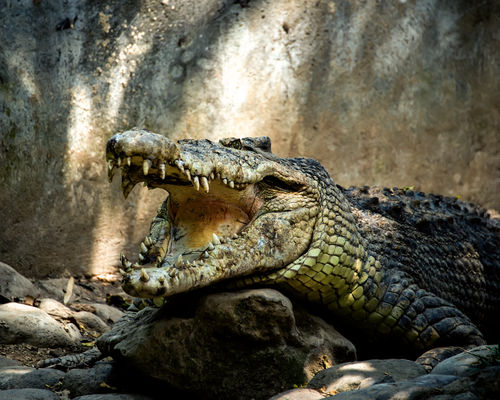 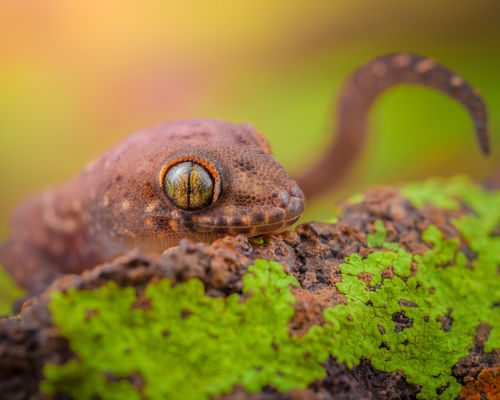 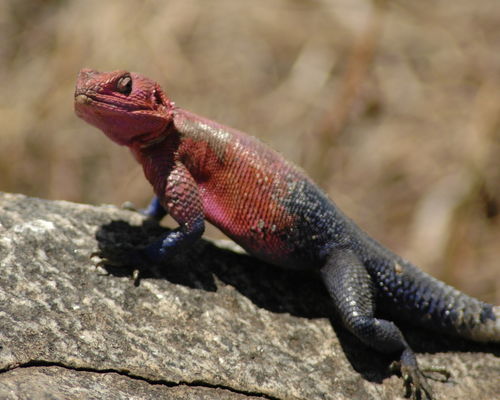 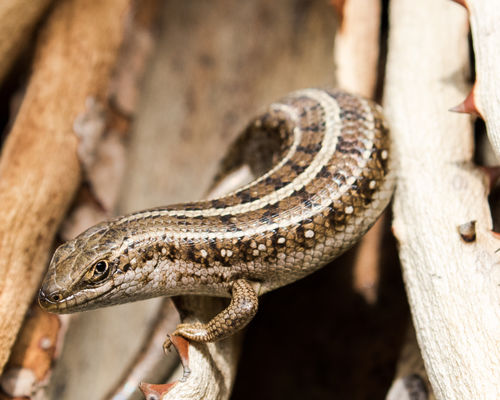 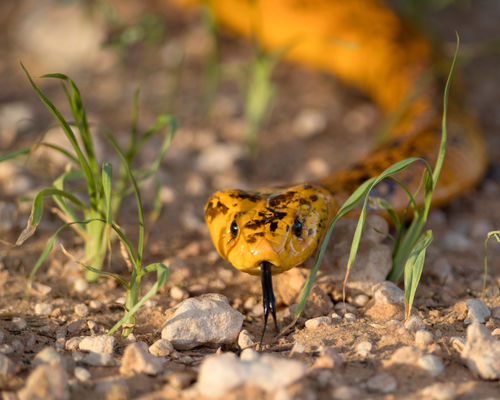 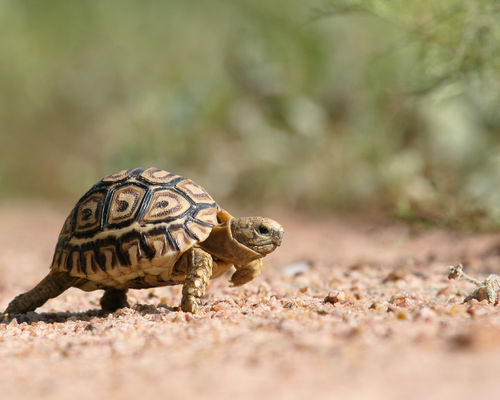 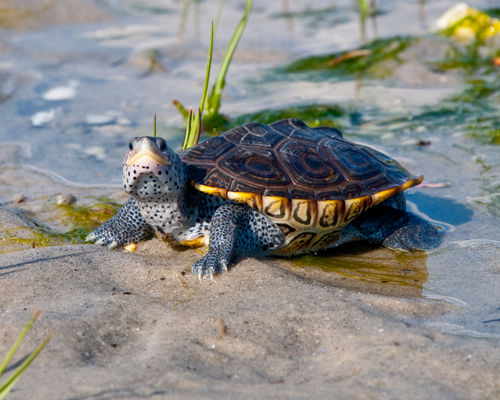 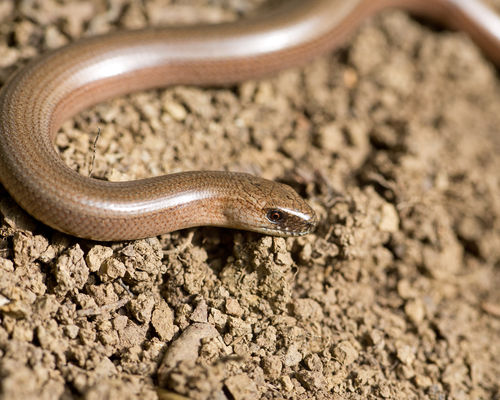 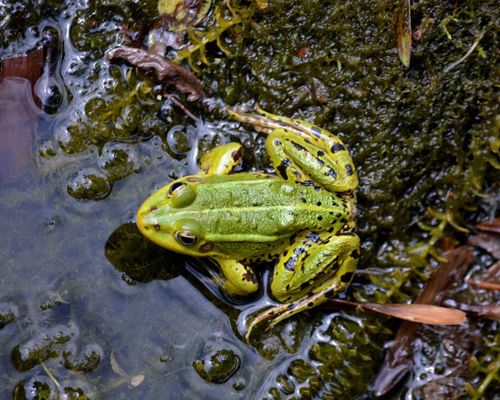