North-east of Swakopmund is the stark grandeur of The Spitzkoppe (sharp head), one of Namibia's most recognizable landmarks. It is located in the Namib Desert, between Swakopmund and Usakos, which is also the nearest town (approximately 50km away). The summit of this imposing granite rock formation (1,728m) was first scaled only in 1946, and its shape has inspired its nickname, The Matterhorn of Africa. But similarities between Namibia's granite inselberg and the glaciated Swiss Alp, begin and end with its sharp peak. A minor peak – the Little Spitzkoppe – lies nearby at an elevation of 1,584m above sea level.

Many examples of Bushmen artwork can be seen painted on the rock in the Spitzkoppe area, which is also the remnant of an ancient volcano, formed in the same way as the nearby Brandberg and Erongo massifs. The Spitzkoppe is now a popular mountaineering, hiking and camping destination.

Folklore has it that the first ascent of Spitzkoppe took place as early as 1904, when a soldier of the Royal Schutztruppe supposedly soloed the peak and made a fire on the summit. What he burned remains a mystery to this day, as there is absolutely no natural fuel of any kind on the upper parts of the peak. The legend suggest that he never returned and that his body was never recovered. What is certain thought, is that there is no proof of his conquest available today. (Perhaps he collected some firewood before he went up!)

The first documented conquest was made by a team of climbers from Cape Town, led by S. le Roux. The next party – O'Neil, Shipley and Schaff – pioneered a route up the northern extremes of the peak, after having first failed on the southwest ridge. They gained access to the gully now known as the 'scramble', but ran out of time to attempt the final faces. Four days later, they made another attempt, but finally gave up. Some of the earliest climbers were defeated by a smooth band of granite only about 3m high, and resorted to carving steps into the rock with a hammer and chisel.

Further successful attempts to the summit of Spitzkoppe included expeditions by Hans and Else Wong and Jannie de Villiars Graaf. Over the next 25 years, the mountain maintained its reputation of presenting a 2 or 3 day struggle to potential climbers. This era came to an end in 1971, when the peak was climbed in 4 hours by a party led by J. W. Marchant from the University of Cape Town Mountain and Ski Club. This team scaled all the lower pitches without ropes and got through the difficult band without using the artificial steps hacked into the granite. They descended from the peak in 2 hours and as they reached the base, rain began to fall for the first time in a year.

Another notable feature of the area is the dome-like Pondok (grass-hut) mountain. It has a chain at the eastern end, helping visitors to scramble up the steep rock to the Bushman's Paradise site, a natural amphitheater that encompasses a splendid floral wonderland.

Unfortunately, the large depository of San art has largely been vandalized, hence The Spitzkoppe is currently a protected MET conservation area, a necessary mandate to save the mountain from increased tourism and abuse. The Spitzkoppe area is run by a woman's cooperative who maintain campsites throughout the brilliantly coloured rocks. There are often local guides to take the visitor around. Alternatively, visitors can join a day tour from one of the hotels or lodges in the area.

Recently the Spitzkoppe where used as the backdrop for the filming of the hollywood blockbuster (or was it a bit of a flop?) 2000BC. Having slept through most of the movie we're really not sure if any of the landscapes bear much resemblance to the Spitzkoppe at all, we're pretty sure the snow was fake though!

At the base of the mountain is the Spitzkoppe Campsite - a community run campsite. 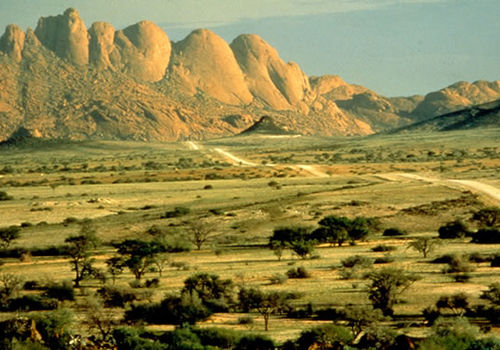