The Naukluft section of the Namib-Naukluft park was initially created as a sanctuary for the Hartmann's mountain zebra. The mountainous area is extremely beautiful as well as having an interesting history and geography. The Naukluft mountains are very popular for hiking and four wheel drive trails and even offer something for the more sedentary, as the beautiful rock pools near the Kudusrus campsite are the ideal place to spend a day lazing in the sun.

The Naukluft Mountains are part of the high rising escarpment which marks the western edge of the interior highlands of Namibia. The flat, plateau like top of the mountain complex is separated from the adjacent highland plateau to the south by impressive near vertical cliffs, while in the north west and west its highest peaks loom almost a thousand meters above the plains of the Namib. The plateau top consists mainly of dolomite and limestone formations. Dissolution of the dolomite and limestone by meteoric waters over many millennia has given rise to karstification of the plateau and an extensive underground drainage system. In some of the deeply incised kloofs discharge from this underground water reservoir occurs as crystal clear springs and streams.

Tufa, also known as fountain stone or waterfall limestone formations, are associated with these springs and streams. These soft, or semi-friable, porous limestone deposits are formed by evaporation of the calcium carbonate rich stream water that filters through the dolomite rocks. A particularly impressive tufa formation with inviting pools in the Naukluft River is reached after a 20 minute walk from the campsite. the widespread distribution of these tufa deposits throughout the Naukluft Mountains attests to a considerably wetter climate during the recent past.

The Naukluft Mountains are of particular interest for the ancient geological history of this part of the country. The mountains are composed of three main geological formations - the Rehoboth Sinclair basement complex, sedimentary formations of the Nama Group and 'nappes' of the Naukluft Nappe complex. The basement is found mainly on the west side of the mountain complex and consists of metasedimentary and volcanic rocks, gneisses and franites, varying in age from 1000 to about 2000 million years. The overlying Nama sediment consists mainly of dark (black) limestone which were deposited about 600 million years ago when the entire south western part of the southern African sub continent was covered by a shallow tropical sea.

The Naukluft 'nappes' which form the top part of the mountains are very large, sheet like units of sedimentary rocks which were emplaced along low angle fault or fracture planes known as thrusts. These movements occurred some 500 to 550 million years ago and are related to active earth forces associated with a period of crustal mobility and mountain building in the Damara Orogenic Belt, an ancient, deeply eroded chain which is known to have existed in the area of the Hakos and Auas mountains and the Khomas Hochland to the north.

The climate is fairly pleasant although summer day temperatures can be extremely hot, winter days are pleasantly warm with temperatures averaging about 20 degrees Celsius. However, evenings are cool and temperatures of below freezing point are not uncommon at night. Most of the areas rainfall occurs between December and April as thunderstorms. The average for the area is about 200mm, but is extremely unpredictable.

Due to an abundance of water in an otherwise arid environment Naukluft was an obvious refuge to early man. Stone artifacts and other implements have provided evidence of the inhabitation of the Naukluft Mountains by Stone Age peoples, the last of whom left a painted record of the animals that occurred in the area as well as their lifestyle. Other signs of former habitation include hides along game trails where animals were ambushed and rows of stakes driven into a rock face to reach beehives.

The plains to the east of the Naukluft were rich in edible wild plants. The abundance of food, game and water also attracted pastoralists during the last millennium. The more recent history of the area has been recorded by the Germans who fought several bloody battles against the Witbooi Khoikhoi. Reminders of these encounters include the grave of a German soldier just above the campsite at Naukluft, trenches and cannon sites. Sections of the route along which the Germans dragged their cannon onto the plateau are still visible a few kilometers south of the campsite.

In late August 1894 Landeshauptman Theodor Leutwein launched a three pronged attack on Witbooi's encampment at the junction of the Naukluft and the Oniabkloof. Leutwein was confident that the Witboois would be defeated within three days, but they offered fierce resistance. Witbooi was an exceptionally good military tactician and his pursuit was hampered because small groups of Witboois branched of into gullies everywhere along the route and retreated without leaving a definite track of either humans or their stock. They were also masters in vacating their positions unobtrusively and the Germans seldom knew when posts were vacated until they realised that no shots were being fired from the positions.

The pursuit of the Witboois continued into the first half of September and a treaty between the Germans and Hendrik Witbooi was signed in Witbooi's lager at Tsams on the western side of the Naukluft Mountains, on 15th September 1894. One of the conditions was that he was to settle again at Gibeaon where land was allocated to him and his tribe.

Well over 50 mammal species have been recorded in the Naukluft Complex and adjacent areas. The majority of these species are however, either nocturnal or small and thus easily overlooked. Nearly a third of the species are rodents, while the carnivores are represented by some 13 species. The Naukluft area was originally proclaimed as a sanctuary for the Hartmann's Mountain Zebra which, at first glance, appears similar to the southern sub-species, the Cape mountain zebra. However, they differ in a number of respects, the most important differences being that:

they are slightly larger than the Cape mountain zebra, with a shoulder height of 1.5m as opposed to 1.3m and bear a closer resemblance to a horse in build.
Their stripes are more widely spaced with the result that the pale stripes are either equal or slightly wider than the black stripes.
Their legs are almost equally banded black and buff, and the mane is well developed.
Antelope species occurring in Naukluft include kudu, springbok, klipspringer and steenbok, while the gravel plains and the sand dune desert further west are the habitat of gemsbok. The most important predators are leopards, with evidence of their presence apparent in kloofs where zebra remains are often seen. Smaller predators include African wild cat, small spotted (black footed) cat, caracal and small spotted genet. Black backed jackal, bat eared fox, Cape fox and aardwolf also occur.

More than 193 bird species have been recorded in the mountain complex and the adjoining plains of which over 90 species have been recorded at the Naukluft campsite. Naukluft lies on the boundary of the distribution of several bird species. It is not only the northernmost limit of some of the true Karoo species such as the Karoo robin and the cinnamon breasted warbler, but several species typical of the north of Namibia reach their southern most limit here. These include Monteiro's hornbill, Herero chat and the chestnut weaver. From an ornithological point of view, the importance of the Naukluft mountain complex is the number of species requiring specialised habitats such as krantzes for breeding. Black eagle, augur buzzard, lanner falcon and Bradfield's swift are among these species.

The habitat preferences of the birds occurring in the Naukluft complex can be broadly classified as follows: kloofs with perennial streams; mountain slopes and cliffs; the plateau and the gravel plains surrounding the Naukluft Mountains. Species to keep a watch for in kloofs with perennial streams are hamerkop, pied barbet, pririt batis, Cape wagtail, crimson breasted shrike, brubru, common waxbill and several woodpecker species. On the slopes you can expect to see mountain chat which are common, Layard's titbabbler and dusky sunbird. Species you might spot on the plateau include Ludwig's bustard, sabota lark, the uncommon longbilled lark which favours rocky areas on the plateau and bokmakierie. 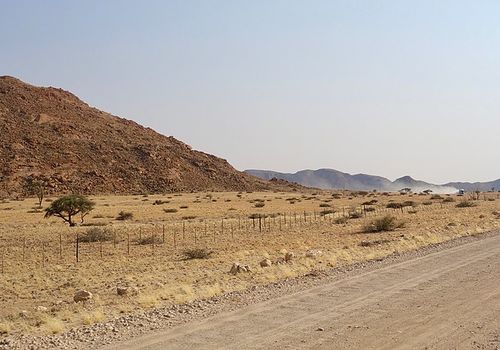