Introduction: The Chacma Baboon (Papio ursinus) is a large monkey with a dog-like face and large, prominent canines. These features give it a more aggressive appearance than other primates. The chacma baboon lives in family groups of up to 150 individuals, with no single dominant male. Baboons are notorious for becoming a pest around humans, where they often disturb rubbish bins. They will tear open tents in their search for free food with consummate ease.

Distribution: They are extremely common in central Namibia, particularly at Okonjima, home to the AfriCat Foundation, a non-profit organization, dedicated to the long-term conservation of Namibia's large carnivores, notably cheetah and leopard. They will often be seen on the side of the road.

Diet: It is probably easier to list the food baboons don't eat as opposed to catalogue what is does. They forage for grass, seeds, roots, bulbs, flowers, bark, mushrooms, fruit, insects, small vertebrates and eggs. Grass is their most important item, which might go some way to explain why they forage around human areas, especially towards the end of the dry season. Regular access to drinking water is essential to their survival.

Colouring: There is a wide range of variation and colour of individuals, which depends on sex, age and location. In Namibia they are a 'grizzled' yellowish brown with a blackish band along the back, on the crown of the head and back. The male has a distinctive bright blue scrotum.

Breeding: Baboons do not have a definite breeding season and are sexually active throughout the year. Gestation period is six months, after which a single young is born. 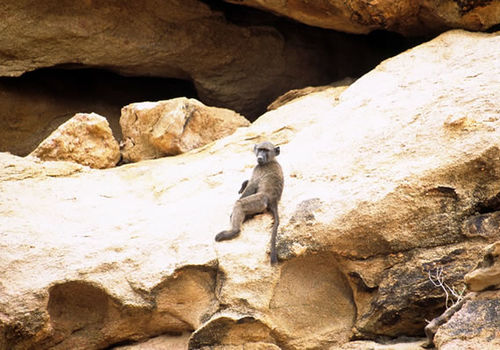