Introduction: The common ostrich (Struthio camelus) prefer an open woodland, semi-dry and dry grassland habitat. They can also be found in shrubland and sparsely vegetated desert plains. They are greater in number on plains with short grasses and dry savannah, but avoid stony or rocky ridges and higher density woodlands. Ostriches gather in pairs, groups of 5 or 6 or up to 24. In the Namib Desert their main predator is the leopard. Jackals, hyenas and martial eagles prey on the young.

Distribution: Throughout the drier parts of the country, especially the northern Namib Desert areas. They are fairly prevalent in Etosha National Park, the Kalahari Desert and in and around Windhoek, Swakopmund, Luderitz and as far north as the Caprivi.

Diet: Small succulent plants and grasses are pulled up (including roots) and swallowed hole. Leaves are striped from larger trees as well as selected flowers and seeds. Flowers and pods of Acacia trees are a favourite.

Breeding: Reproductive habits happen throughout the year. Between 5 and 20 eggs are laid in a scrape in sandy soil, with incubation periods between 39 and 53 days. Both male and female care for their young. 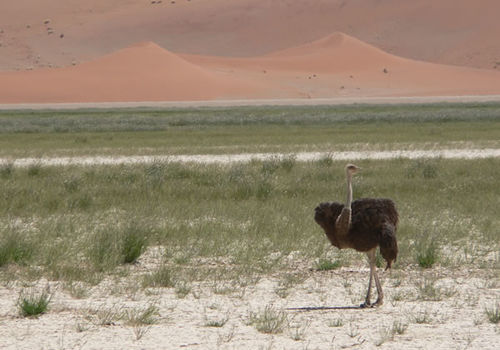