Introduction: Spur-winged goose (Plectropterus gambensis) can be found with comb ducks and at times shelducks. They prefer inland wetland habitats particularly in grassland and large bodies of water such as dams and dense swamps, farm dams, sewage works. They are usually found in pairs or small groups. They fly in flocks in staggered lines and at times in a 'V' formation. They sometimes roost on dead trees and electricity pylons.

Distribution: Common in east Caprivi and on pans in north-east Namibia such as Etosha National Park Pan. Rife in Okavango Delta and Chobe National Park.

Diet: Plant matter such as the leaves of pondweed and grasses. Seedlings of grains crops include maize, wheat, oats, barley and sorghum, potato and sunflower seeds are favoured.

Description: A large goose-like duck mainly white in colour. Plectropterus is the Greek word for striker or spur, and wing, referring to the carpal (wing bone) spur.

Breeding: Spur-winged geese mate on water. A nest is built from grass, reed stems, wood chips and other available materials, in a shallow scrape on the ground. Between 7 and 14 eggs are laid and the incubation period is around 30 to 31 days. 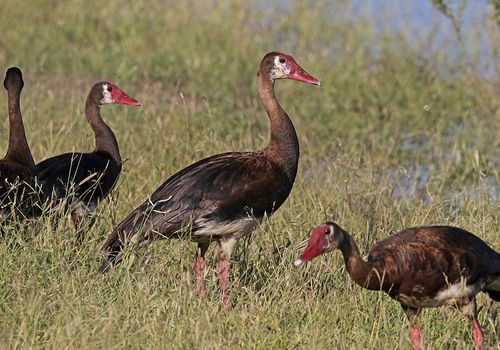