Introduction: Red-billed teals (Anas erythrorhyncha) inhabit most inland wetlands whether man-made or natural usually in pairs or small groups. Flocks of hundreds and at times thousands can be observed at breeding times. Late mornings and early afternoons are usually spent sleeping on the shoreline or standing in water.

Diet: Early morning and late afternoon feeder, sometimes at night on pondweed and other plant matter. Spilled maize, wheat and sunflower seeds are often taken together with yellow-billed ducks.

Description: Erythrorhyncha is the Greek word for red bill, hence the name (not to mention the colour) of this small to medium-sized duck.

Breeding: Mating takes place at ephemeral pans and dams and between 5 and 12 eggs are laid between November and April. Incubation periods are 25 to 27 days. 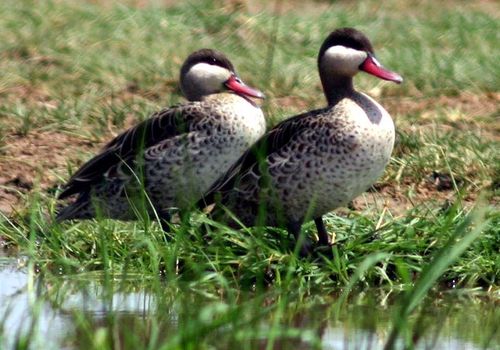