Introduction: Fulvous ducks (Dendrocygna bicolor) are found at inland water bodies, preferring shallow, thickly vegetated waters associated with aquatic grasses and other plants. They live in pairs or small family groups although numbers can rise to hundreds or even thousands in areas of suitable habitat. Ducklings are preyed upon by the African fish eagle.

Distribution: Scarce populations are found in Namibia but they are a common resident of the eastern Caprivi and the Okavango Delta.

Description: Members of the genus dendrocygna are small to medium-sized ducks with characteristic long legs and long necks. They are an aggressive bird who perform ritual displays. Dendrocygna is formed from the Greek word dendron which means tree and the Latin word for swan, cygnus. Bicolor is Latin for pied or bicoloured.

Breeding: Nests are built by both male and female ducks in well-concealed scrapes in long grass near water-lilies around 4 or 5 eggs are laid with an incubation period of around 24 to 26 days. Duckling will dive for around 5 to 8 seconds for food after about 20 days. 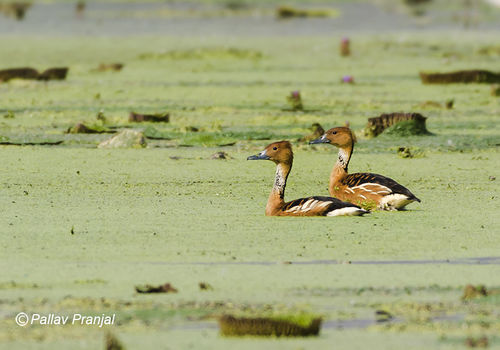