Introduction: Comb ducks (Sarkidiornis melanotos) prefer marsh and temporary pans in woodland, woodland-fringed lagoon of flood plains. They keep in pairs and small groups and often perch in trees, especially dead ones. Standing in shallow waters or on open shores is a favourite trait and they forage mostly in the early morning and late afternoon. They walk with a characteristic 'swaggering waddle'. Flocks fly in 'V' formation or staggered lines with a steady wing-beat.

Distribution: Common in the eastern Caprivi and Bushmanland, Etosha National Park, Tsumkwe and central Namibian regions. They are also prevalent in the Okavango Delta and the pans of Makgadikgadi National Park.

Diet: They feed mainly on plant matter and seeds/fruits of grasses and herbs, water-lilies and occasionally eat winged termites.

Description: Birds of this genus are fairly large, goose-like ducks. They are mainly white in colour with a glossy black upper. Males are much larger than females. Sarkidiornis is Greek for flesh and bird, referring to the fleshy comb of the female.

Breeding: Nests are usually in a cavity in a tree or on the top of a rotten tree stump, usually near water. Between 8 and 11 eggs are laid between January and March with an incubation period of 28 to 30 days. Predators of ducklings include the African fish eagle. 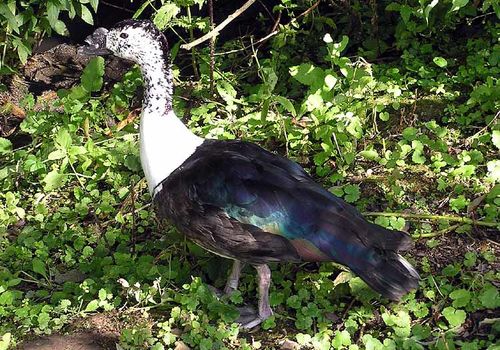