Introduction: The Cape shoveller (Anas smithii) was named after Sir Andrew Smith (1797-1872), a Scottish ornithologist who was also the first Director of the South African Museum in Cape Town. Typical habitats include salt pans, saline lagoons, tidal estuaries, sewage works and shallow freshwater wetlands with an abundance of plankton. They are usually seen in pairs or small groups, grouping with other species of waterfowl.

Description: A small to medium-sized duck that forage near the surface of the water by up-ending or dabbling. Pairs bond temporarily for mating and after breeding the male abandons the female during or after incubation.

Breeding: Females lay between 7 and 10 eggs in January, July to August, in a nest built by the female developed from a scrape in the ground from surrounding vegetation. 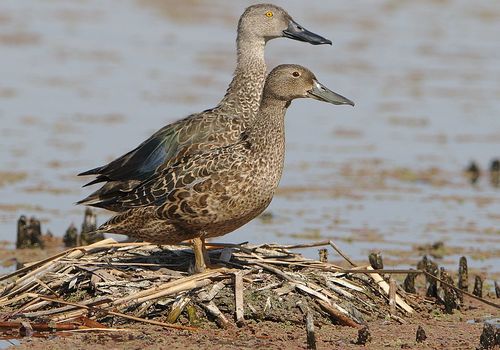