Introduction: The Sundevall's leaf-nosed bat has best been described as small and fragile. It occurs widely in wooded savannahs. Colonies are restricted to from just a few to several hundred and are one of the 6 species that can be found in Arnhem Cave and Restcamp.

Like many other species of leaf-nosed bat, they are cave dwellers. They also inhabit in the sanctuary of rock fissures, culverts, the dark interiors of deserted buildings, disused mine adits and hollow trees.

Distribution: From central Namibia north to the Angolan border including Etosha Park, the Kavango region, Kalahari Desert and in isolated regions at the mouth of the Orange River.

Diet: Individuals emerge at dusk to hunt. They have a keen sense of echolocation and catch small insects in their wings in flight.

Colouring: Off-white to predominately dark greyish-brown long, woolly fur with a lighter shade on the abdomen to that of the back. 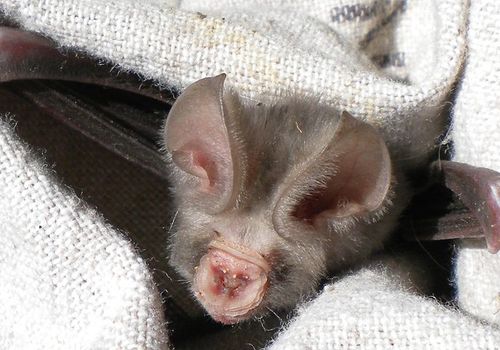