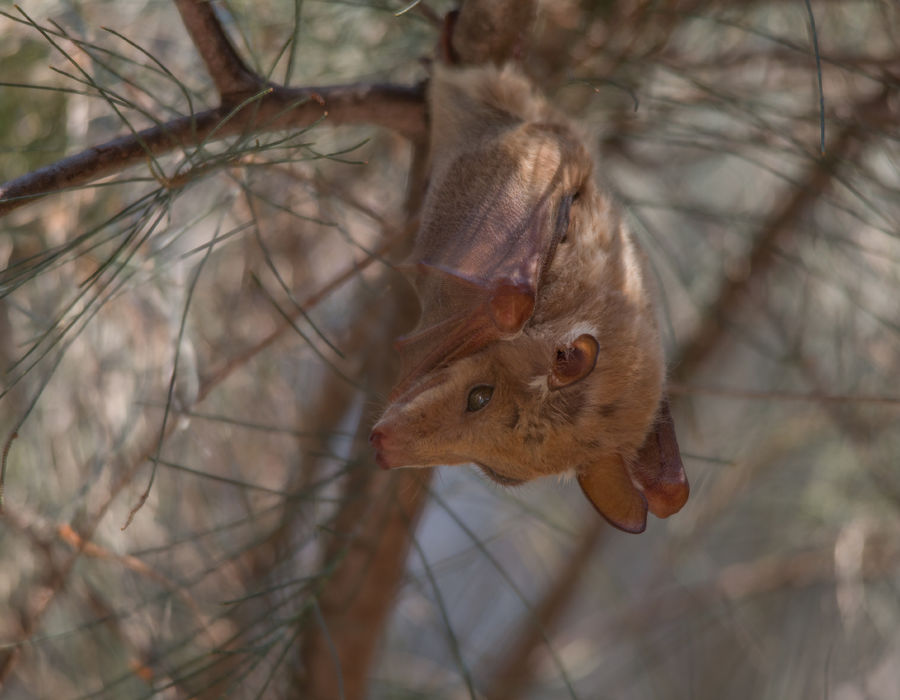 The bat is a mouse-like flying mammal. It belongs to the order Chiroptera which is Greek for 'hand wing'. It's forelimbs are modified to form wings, consisting of mainly elongated fingers between which the wing membrane, (a double layer of skin) is stretched.

Species can be found everywhere in Namibia from the Orange River into the Namib Desert (including Sossusvlei), the Kalahari Desert, Etosha National Park and as far north as the Zambezi Region (formerly the Caprivi Strip).

Bats are amazing animals. They can see, they're harmless, nocturnal and are the only mammals that can truly fly. Other types of mammals, such as flying lemurs, sugar gliders (marsupials commonly found in Australia) and flying squirrels, glide. African bats are not vampires nor do they transmit parasites to human beings.

There are approxiamately 900 species of bat worldwide, all with a unique lifestyle as different from each other as a cheetah from a leopard. They are divided into two sub-orders.

Bats can be great to have around as they keep the bug and mosquito population down, but most people don't want them in the house making noise and excreting messes. The damage can be extensive. Getting rid of colonies of bats from houses and barns can be done by ultrasonic bat repelling devices. Another method would be to plug all the exit holes after the bats have entered for the night. Verandahs are popular night-time roosts. Bats can get confused, especially at dusk and if one does fly in to your house a compromise would be to open the doors and windows and chase it out with an open towel or something similar. They have a sophisticated echolocation system that will enable them to escape under its own steam. The bat sends out a call and then listens for the echo, from the time between when it sent out the call to when the echo arrives, it can work out how far away things are and so avoid them. Echolocation is used for both navigation and hunting prey.

The smallest of Namibia's 3 species of serotine bats.

Wing-gland bats are unique in that they can adapt to very dry conditions.

The Cape serotine bat is one of the most widespread of the African species of bat.

Dent's horseshoe bat is one of the smallest bats in southern Africa.

It is believed that it forages along river beds were greater concentrations of insect can be found.

A distinguishing feature of the pale free-tailed bat is the pale colouration of the fur.

Serotine bats roost in small groups in any nook or cranny of buildings, rocks and trees.

Rüppells horseshoe bat occur in small colonies of about 12.

The Sundevall's leaf-nosed bat has best been described as small and fragile.

The common name of the straw-coloured fruit bat refers to the fur colour on the shoulders and back.

Small colonies roost by day in the leaves of the banana plant.