Namib Desert Lodge sits at the foot of a red sandstone cliff, which consists of the fossilized dunes of an ancient Namib. It is situated just 60 km north of Sesriem, the gateway to Sossusvlei just 5kms from the main road. Located in the Gondwana Namib Park is shares a border with the Namib Naukluft Park.

The name Sesriem is Afrikaans and means six belts. Early settlers attached six belts together, (made of oryx hides), in order to lower buckets down into the canyon to scoop up water, from the pools that were inaccessible to their livestock.

The (fossil) dunes overlooking the lodge are 20 million years old and contain fossils of the ancestors of the modern day Ostrich. They are evidence that an earlier Namib existed. As the climate changed, gradually getting wetter, the additional moisture caused the sand to solidify into sandstone. Then some 5 million years ago, the climate reverted to the desert conditions found in the Namib today, allowing the formation of a new sand sea.

Sossusvlei itself is a clay pan - set amid huge piles of sand known as star dunes - in the central Namib Desert, and lies within the Namib-Naukluft National Park, Namibia. (Links) Fed by the Tsauchab River, it is known for the high, red sand dunes which surround it, forming part of the sand sea, which stretches just north of Luderitz to the Kuiseb River. Some of these dunes reach as high as 220m. Vegetation, such as the camelthorn tree, is watered by infrequent floods of the Tsauchab River, which slowly soak into the underlying clay.

Namib Desert Lodge is set amongst tall trees and palms. The main building has a reception, bar and a large verandah with outside seating for guests to admire the surrounding scenery. There are also 2 swimming pools. Breakfast and dinner are served buffet style and a small selection of light lunches can be ordered on request. Their cozy bar is well-stocked with South African wines.

Accommodation is in 65 double rooms. They are all equipped with twin beds, en-suite bathrooms and air-conditioning. Some of the rooms overlook the dunes and others the cliffs to the rear.

As Namib Desert Lodge doesn't run it's own excursions into Sossusvlei, most guests self-drive into Namibia's famous dunes from here.

A variety of activities are offered:

Enjoy the panoramic views across the Namib Desert on various guided drives in an open vehicle. Explore the Namib on foot on your own on well-marked trails. Or cycle through the Gondwana Namib Park in your own time with minimal effort on an electric bicycle (fat bike). 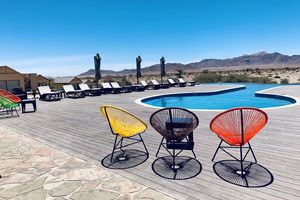 Lovely rooms with rooftop terraces or a choice of campsites around 45km north of Sesriem.

Desert Camp is situated only 5 km from the entrance gate to Sossusvlei and Sesriem Canyon in the Namib Naukluft Park. 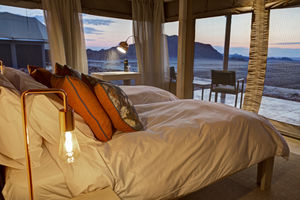 Set on a ridge, Desert Hills Glamping Camp offers amazing views over the valley beneath. 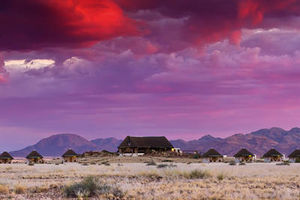 Mid-range accommodation offering some of the best value for money in the area. Horse riding an added activity.

A new addition on the same property as the Desert Homestead. Hiking & riding are popular activities here. 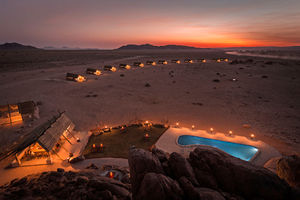 Have you ever seen the vast horizons of the Namib Desert from a point of pure solitude? A place where the whisper of the wind is the only sound that stirs the desert silence? The Desert Whisper is the ideal opportunity to embrace silence and solitude, to break away from the rush. Located on a small outcrop within the Gondwana Namib Park, this is an intimate experience where guests can enjoy solitude without compromising on luxury. Guests park their car at the base of the outcrop and are transported to the Desert Whisper by their Host. The kitchen is fully stocked with thought-through culinary delights, and access to a selection of wines, gins, whiskeys and rums to tickly any fancy. The afternoon can be spent lounging by the private plunge pool, with its own stocked pool-bar; are swinging in the floating chairs on the Desert Whisper’s terrace. A moment here offers serenity unparalleled, as the sun sinks into the western horizon.

A budget choice, catering for both larger groups and individual travellers.

A small intimate lodge in an amazing part of the Namib Desert. While the lodge can be used as a base from which to visit the dunes at Sossusvlei, the tranquil and beautiful environment make it a destination in it's own right.

Mid-range lodge located only 22km from the Sesriem gate to the Namib-Naukluft Park. 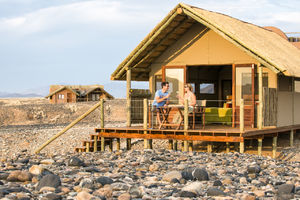 Up-market lodge with private entrance to the dunes at Sossusvlei. 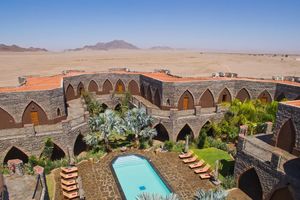 Moroccan inspired architecture seems strangely out of place in Namibia. The location, spa and general amenities are good. 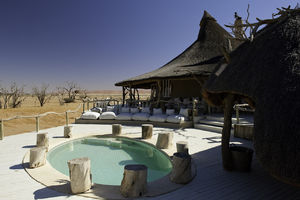 Luxury lodge with guided tour to the dunes using the lodges own private entrance, excellent choice for those looking for a little extra luxury. 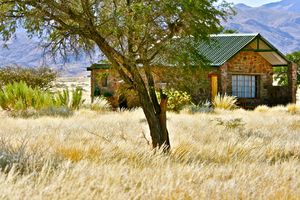 Reasonable value for money - on the main route to Sossusvlei.

Take on the great outdoors, without the hassle of setting up a campsite. This is our version of glamorous camping. Show up and relax in style with this new self-catering experience. Tents are fully equipped with kitchen and en suite bathroom, and there is no need to bring any sleeping bags. Spend your evening looking out into the Namib Desert landscape, with the crackling fire to keep you company. For guests who wish to enjoy the best of camping and lodging – full lodge facilities are also available at this camping experience. Enjoy the activities on offer in the oldest Desert in the world.

Face the horizon head on, from the crest of a dune where the stars are so clear they seem just beyond reach. A place where imagination becomes tangible. The Namib Dune Star Camp. A short drive from Namib Desert Lodge, guests are chauffeured to the camp. Dinner is served on a beautiful wooden deck with the horizon stretches into forever and delicious aromas float through the evening air. Each of the freestanding cabins are positioned along the crest of a dune to offer undisturbed views. What takes this experience into a class of its own, is that the bed in each chalet is on wheels. This offers guests the opportunity to wheel their bed onto the cabin’s private terrace where incomparable night-sky views await. Fall asleep to the silent sound of shooting starts and the whisper of the desert air.

Before sunrise, the hike will start after an early-bird-breakfast. The first leg consists of crossing the local landmark mountain. We will follow a canyon to the mountain saddle. 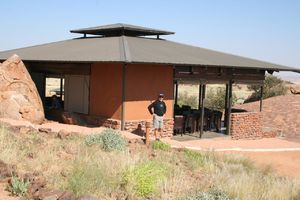 A combination of permanent structures and canvas make this an interesting choice for the budget conscious traveller. 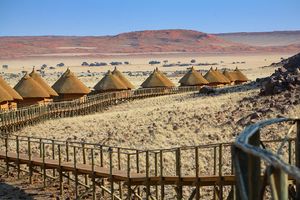 The only lodge inside the borders of the national park. Allows for extra early visits to the Sossusvlei dunes. 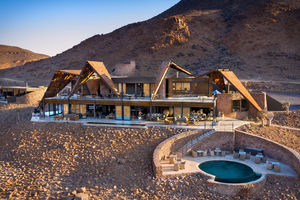 Most luxurious lodge in the area, air-conditioned rooms and top of the range guiding.

Situated adjacent to the oldest Desert in the world, Sossusvlei Lodge is a luxurious retreat in this premier tourist attraction area in Namibia. 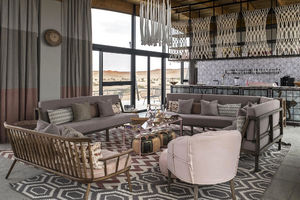 Unique in every way, this property offers a new insight into the rhythms of the mighty Namib. The Desert Grace is the result of a daring architectural feat, with each building constructed entirely from sandbags instead of bricks. Facing the west, this lodge offers unparallel views of the sunset from the comfort of a private plunge pool. Pink Gin and Tonic’s and indulgence is the language in this iconic location. A place where the pulse of the desert comes alive as the setting sun dips into the western horizon. Guests have the opportunity to join a Sossusvlei Excursion, guided and inclusive of a champagne brunch. Or hop on board a Dune Drive in the Gondwana Namib Park, where sunset are celebrated on true Namibian fashion.

Situated a mere 45km from Sesriem, the sky melts into endless plains in a vista so vast it will take your breath away.

Very nice lodge and place with excellent accomodation and especially clean swimming pools. Why was Dinner not included in the cost?

I thought this was good value and their sundown drive is pretty spectacular...it is a bit far from the dunes but a great place to stay.

Best value for money. Wonderful sundowner trip on the petrified dunes. Perfect place to relax after the long journey from europe and a full day at Sossusvlei.

Enjoyed it very much at Namib Desert Lodge! The best out of all the lodges we have been in our trip. Received excellent service from all at this lodge. Food was excellent.

Nice place, catering mainly to large german tour groups - no wonder the staff were a bit jaded. Would have preferred a place closer to the Dunes and a little bit more personable,. but otherwise fine,

Very friendly staff and good facilities but we would have liked to be closer to the dunes. This was dictated by the time of year being the busy Easter holiday. Next time we will need to book earlier.

Basic accommodation, but good enough. Motel style. Sheets felt polyester the only criticism. The food was fine, and the staff were excellent. (perhaps not ideal for vegetarians looking at the options there) The walk to the petrified dunes and the surround was great. Recommended.

Namib Desert Lodge is situated 60 km north of Sesriem on the C19. The turn off is well marked and the lodge is a further 5 kilometres from the main road