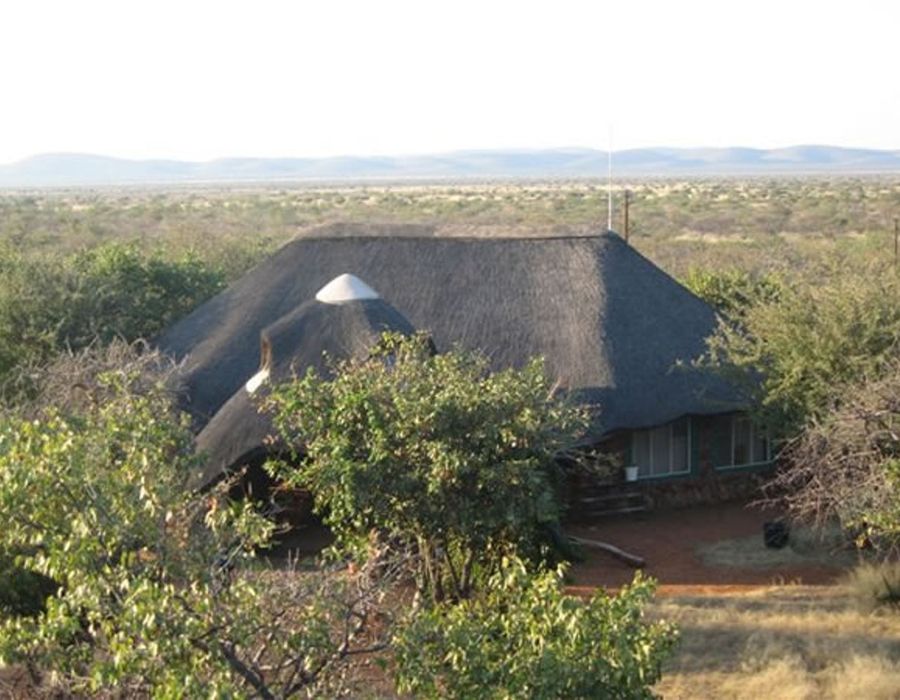 Otjitotongwe Cheetah Farm is situated in north-eastern Namibia, 24kms east of Kamanjab on the north side of the road. It is home to a non-profit organization, aimed at conserving cheetahs in a natural environment. The 7,000ha farm, has both tame and wild cheetahs, many bought from farmers to prevent them from being killed.

The restaurant and bar are in the main thatched building. It has an all day tea and coffee station. Relax on the lawn by the swimming pool.

There are 5 double bungalows and 2 family rooms. 1 of the family rooms has a double bed. Each has its own en-suite toilet, shower and private verandah.

Breakfast, lunch and dinner are all served as a set buffet. There is no mains electricity supply on this farm.

The cheetah originally occupied most of Africa except for the equatorial forest and the true desert, (Sahara & Namib) as well as much of the Middle East and India, where it became extinct in the early 1950's. It is now extremely rare in the rest of Asia and Africa, north of the equator.

It is estimated that there are less than 7,500 cheetah left in the world, and about 6,000 of these are found in Southern Africa. According to a 1970 study, the numbers of cheetah in Namibia had improved, due apparently to the removal of lion and hyena, by farmers. In some cases, it was because of the re-introduction of various antelope species, favoured by these fleet-footed cats.

More recent surveys have shown that Namibia has 2000-2500 cheetah, of which 95% are on private (game of cattle) farms. Unfortunately, some farmers have continued to shoot cheetah because of their tendency to raid stock, particularly where their natural prey species are scarce, or absent. Whilst the current figures do not make the cheetah endangered in the absolute sense of the word, the extraordinary degree of genetic uniformity that these cats have been shown to exhibit, raises the possibility that a disease could devastate wild populations. Otjitotongwe is dedicated to the preservation of the cheetah species.

Guided game drives: Sighting cheetah can be difficult as they often head for bushes and grass for cover. Their whistling or bird-like chirp is totally different from other cats though. Both tame and wild cheetah can be found here.

Nature walks: Apart from the flora and fauna found in the surrounding environment there are a couple of rather unusual sights worth a visit. Python vine (Fokea multiflora) is a shrub or small tree that often twines and strangles other trees. Stromatolites are fossils algae, believed to be between 600 and 700 million years old. They grew in the warm, shallow sea that once covered northern regions of the country, providing ancient records of life on earth.

An extremely popular and well managed lodge which is owned by the local community, Grootberg has stunning views and interesting activities including Rhino tracking & Damara village visits.

You will find Malansrus Tented Camp nestled between beautiful shady Mopane trees, with spectacular views onto a set of granite “koppies” close by.

Nature-lovers' cup of tea, this peaceful campground comprises eight spacious tents, each fully equipped with bedding, towels and kitchen utensils. Having nature right on your doorstep, while having all the luxuries of civilisation at your fingertips is one of the most sought-after experiences in our modern day. Enjoy the peace of camping, without the hassle of setting up camp. And an added benefit of full access to the lodge facilities, including restaurant, pool and activities. 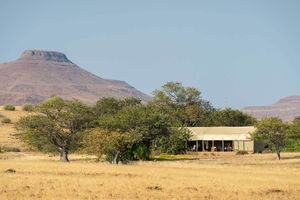 Palmwag is a series of table-topped mountains and rocky land tinged a deep basalt red is dotted with green from the rod-like euphorbias and the robust mopane and shepherd trees. The lodges is positioned in a small oasis of makalani palm trees, which mark the underground watercourse of the Uniab River. This is home to the Palmwag Concession, where desert elephant, rhino and lion call this red, rugged terrain home. This lodge offers access to unique under-canvas sleepout experiences within the concession area, as well are various scenic drive opportunities. In conjunction with the Save The Rhino Trust, Palmwag also offers guests access to partake in rhino-tracking to visit the mighty mammals in their natural habitats. There is no lack in comfort though, as the property hosts a series of chalets with different views and vistas, and an occasional visit from the resident Elephant, Jimbo.

On a large farm, offering visits to the nomadic Himba people.

We appreciate very much the Cheetah game. Simple rooms but with a familiar athmosphere; we loved this place.

Very welcoming people, meals very well cooked. Unforgettable experience to be so close from cheetahs, even wild ones.

Incredible place, feeling like at home in the middle of the bush! Great kindness of the owners and extraordinary ceetah experience!

we loved this place because it was miles from anywhere. Hosts extremely helpful and friendly, good home cooking and cheetah experience was fabulous.

An amazing place. The owners are just fabulous and have created an original oasis. There love of the cheetah's is apparent. Very impressive, a must do.

Fantastic friendly service with clean, comfortable rooms and home-cooked meals from heaven! The wildlife being so close and accessible was the icing on the cake!

An amazing save the cheetah Project! Nice Campsite and very nice Bungalows! Hi to Tolley an Roleen and thier children! You make us feel like home! And a very tasty kitchen!!!

Loved it. Like staying over with someone you know - owners are super friendly and provided amazing home- cooked meals. Experiencing the cheetahs close-up a wonderful experience!

our second favourite for the special experience of being in a cheetah farm. the owners were very friendly and it was great to chat with them in the evening in front of a delicious dinner.

Very fun and informative experience with the farmers family ! Definitely recommended ! Campsite on the farm is also very nice with basic facilities but a beautiful steiing among the trees !

Feeding a cheetah is an unique experience.The owners were very friendly and it was great to chat with them in the evening in front of a delicious dinner (home-cooked meals).Beautiful accomodation!!

Just what we were hoping for. Accommodation was simple but adequate. Owners very friendly and helpful, home cooking for dinner was lovely. BUT the cheetah experience was fantastic, more than we hoped for.

The food here was incredible. It tasted like a home-cooked holiday dinner. We loved petting the tame cheetahs and going out to feed the wild ones. Tollie, Roeleen, and their family have a great mission and we really respected what they are trying to do with the cheetah population.

Travelling from the south, fork left after Outjo towards Kamanjab on the C40. The turning for the Otjitotongwe Cheetah farm is 24km east of Kamanjab on the north side of the road.