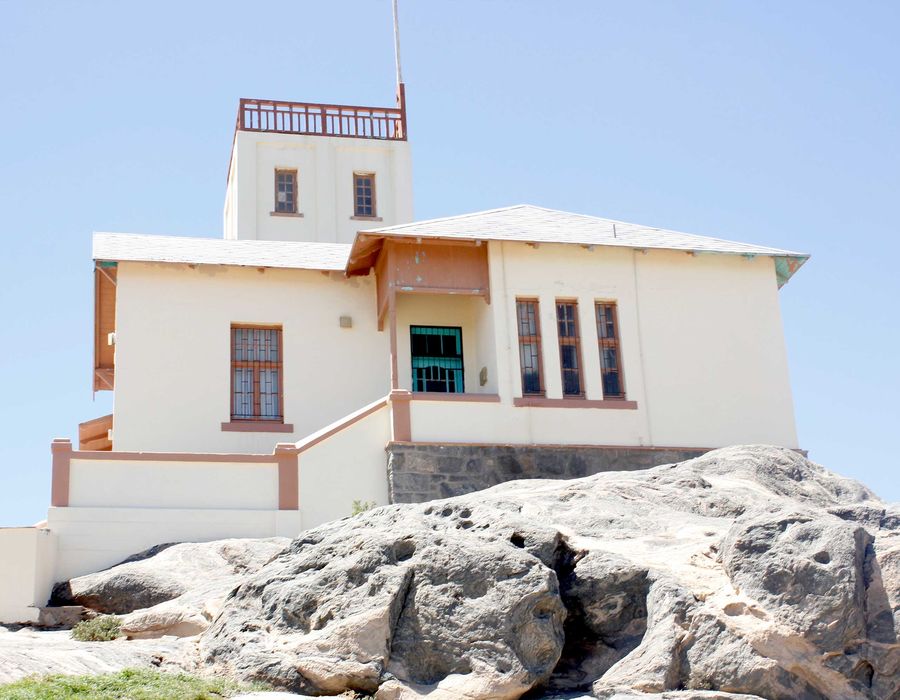 Shark Island Resort offers excellent value-for-money accommodation, especially for those travellers who prefer to self-cater. Stay in one Luderitz's most iconic landmarks which affords excellent views over the bay, town and harbour. Sightings of seals and pelicans plus numerous other species of wildlife also frequent the rocky areas around the resort.

This is an ideal destination to explore Luderitz one of the earliest settlements in Namibia. The town itself was founded by the German merchant, Adolf Luderitz in 1883 as a trading base. The 19th century German architecture is still very much in evidence today.

Accommodation is in either the lighthouse or in camping:

Lighthouse: This is an older building but a lot of fun to stay in. There are 2 rooms with 2 beds in each room and 2 bathrooms. It has a fully-equipped kitchen, with cutlery/plates, kettle, fridge etc. There is a sitting room with a television.

A word of warning is that on occasion Luderitz can be very windy and the exposed peninsular often bears the brunt of the breeze - and this can make camping here (even in the most sturdy of tents) fairly 'interesting'.

The only activity run by the resort is the guided Sand Roses trip, into a diamond area, near Agate Beach. Here there are sand roses formed from crystallized gypsum. Tourists are forbidden to just pick them up off the ground, but nowadays, you can arrange a trip, through the Ministry of Environment's Tourism Office. A ranger will accompany the tour and help you dig one out. Swimming is allowed at Agate Beach, but visitors must note that there are no lifeguards on the beach.

Also located here at the picturesque and relatively calm bay of Lüderitz Peninsula, is a lovely beach, but the water temperature makes it only suitable for the resident marine mammals. The Norwegian whaling station, built in 1914, is now nothing but a rusty ruin.

Visitors to the area also go to Diaz Point, 22km south of Lüderitz. There is a classic lighthouse and replica of a cross erected in July 1488 by Portuguese navigator Bartholomew Dias, on his return voyage from the Cape of Good Hope. The point is frequented by sea lions, and from the nearby car park, you can observe an African Jackass penguin colony on Halifax Island. Dolphins, cormorants and a variety of wading birds can also be observed from here.

Grosse Bucht (Big Bay) at the southern end of the peninsula, is another wild and scenic beach. This normally cold and windy spot is home to flocks of flamingos, that feed in the tidal pools. It’s also the site of a small but picturesque shipwreck on the beach. Just a few kilometers north, is the small seaside rock arch, known as Klein Bogenfels.

Visitors should report to the office in Schinz Street for check-in and out.

Pomona & Bogenfels Day Tour: Trip into the Sperrgebiet (forbidden diamond area) with visits to the abandonded mining town of Pomona & the rock arch at Bogenfels. 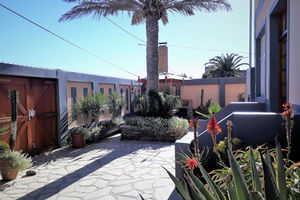 I loved the place it is looking a little tired and needs some attention, not properly stocked no toaster and no kettle.

Due to the wind we stayed in the cabins at no extra cost. The facilities and camping site are attractive and so good quality.

Neat and very interesting location. Stands were separated by boulders. The ablutions are not new and needs some TLC. However it was clean.

The position is spectacular but not so good for camping: too windy and without acceptable services. To avoid, it is better to chose an hotel in the town.